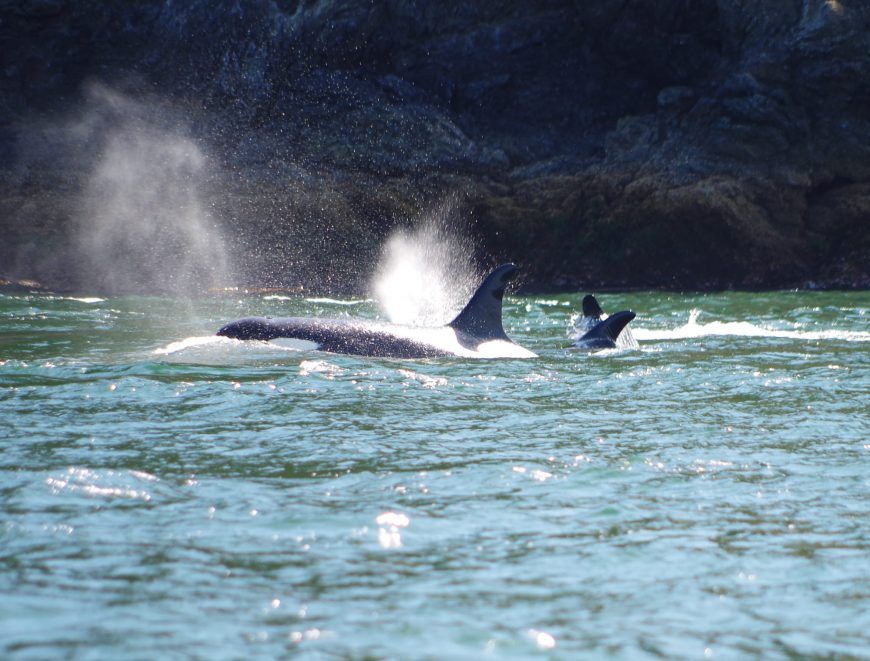 It is said we should never anthropomorphize animals when it comes to scientific research but a recent study published in the Journal of Mammology, suggests that whales and dolphins endure a grieving process akin to our own when they lose a loved one.

Scientists also noted that while species mourned differently, they all mourned in their own way. Study co-author Robin Baird from the Cascadia Research Collective in Olympia, Washington, told ‘Dive Magazine‘:

The animals go through a period where they’re experiencing the same kind of emotions you or I would when a loved one dies.

And Melissa A. L. Reggente of Department of Biology, University of Milano-Bicocca, told ‘National Geographic‘:

They are mourning … they are in pain and stressed. They know something is wrong.

So why is this study important?

American author John DeFrain said, “The death of a baby is like a stone cast into the stillness of a quiet pool; the concentric ripples of despair sweep out in all directions, affecting many, many people.”

Knowing they mourn, is there anything more brutal for dolphins than the Taiji dolphin drives?/Dolphin Project

Cetaceans have been scientifically documented to be as complex and socially connected to one another as humans are, so why do we so readily discount their grief? ‘Seattle Pi‘ writer, Candace Calloway Whiting explained the similarities back in 2009, when she wrote, “Cetaceans have a special type of cell (called a spindle cell) previously found only in humans and the great apes.” This implies, Whiting added, “that they aren’t just intelligent, but they are sentient and feeling as well: those cells are associated with our deeper emotions and social bonds.”

If anything, the results of this study should have a ripple effect on how we view wild and captive cetaceans and more importantly, how we treat them. Consider Corky, who was ripped away from her family in the waters of British Columbia and who has subsequently lost ten calves in captivity, the oldest of which, according to Orca Aware, lived for just 46 days.

The study also throws salt into the festering wound of the cove located in Taiji, Japan which continues to actively drive three of the species mentioned in this study for capture or slaughter. The process of which only incurs an additional level of wretchedness for these poor sentient animals.

Studies by the National Marine Fisheries Service (NMFS), have, in the past, identified several potential stressors — terror, chase, capture and restraint, associated with capture myopathy syndrome in cetaceans, but even these neglect to account for the aftermath and the decimation of pods when calves are ripped away from mothers or mothers are slaughtered. Neither do they consider the impact of a matriarchal pilot whale slaughter on the surviving pod.

For those dolphins not slaughtered but retained for marine parks, by the time these animals reach the tanks of a captive facility, what they have endured is inconceivable. And yet, they remain oddly benevolent towards the very species that imposed this harm upon them.

Once wild, this bottlenose dolphin has been broken and remade into a people entertainer. Taiji, Japan, Feb. 2016. Photo credit: Ivana Grubisic / Dolphin Project

When it comes to expressing our empathy for one another, we have few problems. We are not the only species deserving of that consideration. If anything, this study shows that empathy extended to cetaceans is not misplaced. If marine parks can say their animals are happy, then they must experience sadness. And if they’re capable of joy, then they must know sorrow.

On September 1st, Taiji will, once again, commence its annual dolphin drive hunt. Hundreds of cetaceans will endure a process that nobody with empathy could ever endorse. For the dolphins captured, they will either experience a complete lifestyle change or the end of life altogether. It is a brutal practice that last season saw a female Risso’s dolphin die at the feet of Dolphin Project director Ric O’Barry. This dolphin did not even make it to the killing area of the cove. Traumatized from the drive process itself, the dolphin succumbed to capture shock instead.

So! What can you do?

Take our pledge never to buy a ticket to an aquarium with captive whales and dolphins.

Take a more active approach and consider joining our team as a Dolphin Project Cove Monitor.

Attend one of the many global events held for Japan Dolphins Day. Psst, Ric O’Barry will be in London for the Sept. 1st, 2016 event with Leilani Münter, our Carbon-Free, race-car driving veteran Cove Monitor and star of the Emmy-nominated documentary, ‘Racing Extinction’.

If at all possible, please consider a donation to help Dolphin Project. No amount is too small. We’re a small grassroots organization that relies on donations to continue our work. Thank you for your empathy, together, we can make a huge difference.