Study: SeaWorld’s Apex Predators Are Rotting to the Core

Home/Blog/Captivity Industry/Study: SeaWorld’s Apex Predators Are Rotting to the Core 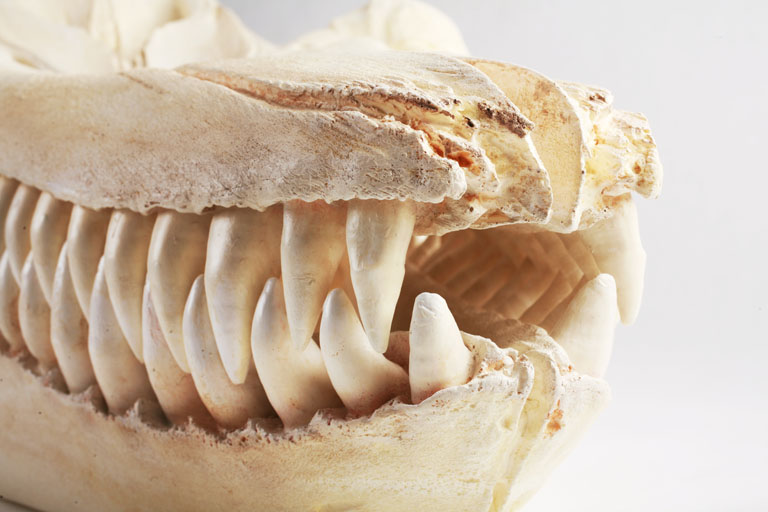 It may sound farcical to exhibit an apex predator minus its teeth but according to a new study, SeaWorld is doing just that. The peer-reviewed paper published in the Archives of Oral Biology, says orcas held in captivity are losing their teeth and they’ve linked it to to the whales’ immediate environment.

Twenty-nine orcas in total were assessed and scored for coronal wear, wear at or below the gum line, fractures, boreholes and even missing teeth. Whether captive-born, wild-caught, young or old, every individual animal included in the study had some form of dental degradation. Almost half exhibited “moderate” mean mandibular (lower jaw or jawbone) wear, and an additional 24% of whales examined exhibited “major” to “extreme” wear. Furthermore, certain teeth in the lower jaw presented evidence of a ‘modified pulpotomy’ procedure.

Unlike diphyodonts that have two sets of teeth in a lifetime and polyphyodonts whose teeth are constantly replaced, orcas are monophydonts meaning they only get one set of teeth ever. Now, an international team of researchers has found that every individual orca examined and held by the same company, displayed varying degrees of dental damage that impacted or had the potential to significantly impact, the health of orcas held across three SeaWorld parks in the US and Loro Parque in Spain — which houses SeaWorld-owned orcas.

Given that captive and most wild orca don’t use their teeth to chew their food but rather to capture and hold prey, study co-authors Professor John Jett of Florida’s Stetson University, Dr Ingrid Visser, a New Zealand-based scientist, Dr Jeff Ventre, a medical doctor and Dr Carolina Loch, Faculty of Dentistry, University of Otago concluded that “oral stereotypies such as biting and chewing on concrete and steel tank surfaces likely contributed” to tooth destruction.

If you have watched the documentary ‘Blackfish’, this topic will be a familiar one, as will two of the study’s authors, John Jett and Jeff Ventre, former SeaWorld trainers who are using science to link the captive environment to the welfare of orcas held in an unnatural setting. As co-authors of the 2013 peer-reviewed paper: ‘Orca (Orcinus Orca) Captivity and Vulnerability to Mosquito-transmitted Viruses,’ Jett and Ventre first approached the issue of tooth damage in captive killer whales in the 2011 paper: ‘Keto & Tilikum Express the Stress of Orca Captivity.’ Their conclusion then was that confined conditions imposed on orcas were directly responsible for multiple health issues, including oral degradation.

“Both of us have always appreciated the effectiveness of the topic of teeth pathology (in terms of how it underscores the health consequences of captivity) and this is why we used it in our original “Keto & Tilikum” paper, which still holds up,” Ventre told Dolphin Project. “Unlike the topic of survival, which is difficult for many people to grasp, this is something the zoological community cannot run from.”

This undeniable truth Ventre suggests, is that tooth damage is observable — even by the public. When an orca has endured a ‘modified pulpotomy,’ a phrase used by the co-authors themselves, it is impossible to miss. It is also a painful process for the animals that involves using a variable speed drill to poke holes through the pulp of the tooth and into the jaw. The goal is to remove any soft tissue so all that remains is a cone of enamel and an open borehole. Unfortunately for the orca, this open hole invites infection meaning it must be consistently flushed out with an antiseptic. Boreholes were mainly observed in the front teeth of the lower jawbone with “more than 61% of tooth 2 and 3 and 47.27% of tooth 4 bearing evidence of having undergone the modified pulpotomy procedure,” the study said.

The study also implied that a whale’s environment was more prominent in tooth degradation than the age of the animal. For example, the study mentions two female calves who reside at SeaWorld’s California facility and one female calf at the Texas facility who exhibited different levels of tooth degradation. Whereas the California-based calves were noted to have minimal coronal wear and no other pathology, the Texas calf’s tooth damage was much more extensive. Ventre believes one of the key factors for this is social dynamics which is probably, “variable on a case-by-case basis,” he said, but relates to, “things such as relationship to the matriarch and which animals interact with each other.”

“We know that orcas engage in observational learning so perhaps that plays a role. There’s also a growing body of literature on stomach problems and oral stereotypies among other mammals (e.g., horses) so maybe some of the animals that have really poor teeth also have stomach problems (which we know is common in captive orca). A growing body of literature also suggests that chewing and chomping reduce cortisol (a stress hormone) in captive mammals. So, it’s also plausible that particular animals suffer disproportionately high stress and therefore are more likely to ruin their teeth coping with stress. Jeffrey mentioned social positioning, which probably plays a role in chronic stress.”

Another young animal included in the study is 6-year-old Makaio at SeaWorld Florida. Although no damage was observed in his maxillary teeth (upper jaw), “one hundred percent of his mandibular teeth had damage,” said Jett.

Whales held at different parks, therefore, presented different pathologies. The orcas in Florida suffered from more severe mandibular and overall dental pathology than the orcas in Texas who exhibited more severe maxillary teeth pathology. Jett suggested that with such a small sample size it was easy for the overall results to be influenced by just a few animals. “In the case of Florida,” he said, “both Tilikum and Makaio exhibited very poor maxillary teeth, thus influencing the results toward the extreme pathology side. Ditto Texas, where Kyuquot’s maxillary teeth are in very poor shape.” To counteract the small sample sizes, the authors used non-parametric statistics which relied not on numbers but a ranking or order method instead.

Teeth that were fractured in the upper jaw also correlated to fractured teeth in the lower jaw which did not surprise either Ventre or Jett. “This just suggests more jaw popping was done by a particular animal, maybe a male or subdominant,” said Ventre. “Mandibular and maxillary tooth damage is correlated because an animal that chomps and chews on tank surfaces is likely to experience damage to both uppers and lowers,” added Jett. “In other words, the behavioral propensity is the causative factor for the correlation. Mandibular teeth problems are more common than maxillary problems in many mammals, which is due, in part, to the bottom jaw moving against the stationary top.”

By the time a tooth is ground down to the gumline, it has probably endured multiple injuries. “Teeth wear “obscures” a history of fractures,” explained Ventre. “A tooth may begin the “pathological cycle” as a fractured one (from jaw popping), and then later get ground down from stereotypies or flattened down and altered via a modified pulpotomy.

“The actual number of teeth exhibiting pathologies has undoubtedly been higher with some animals than what we reported,” added Jett. “Some of the pathologies were not observed because they have been “erased” from the record. For example, a tooth could have been broken, chipped, etc. in the past but because the tooth is now worn to the gumline we can no longer observe the fracture feature that was present in the past.”

As former SeaWorld trainers, both of the authors have been involved in what the park itself describes, “superior dental care.”

“We were told it was to relieve infection,” Jett said.  “SeaWorld vets at some point purchased or used a thermal imaging camera to find “hot spots” in their mouths and other body parts. Drilling was a way of getting ahead of a brewing infection when their teeth or gums appeared warmer than surrounding tissue, or so we were told.” The drilling process itself was not pleasant for the whales.

From a former interview with the co-authors, Ventre said the last pulpotomy he witnessed was in 1995. “The whales didn’t like the procedure because they would often shudder and sink down in the water. Sometimes it would take several sessions to complete the process.”

Jett echoed the same sentiment but added, “we occasionally used Lidocaine although it appeared to have a minimal anesthetic effect.”

An apex predator without its teeth is unfathomable, and yet, “despite the prominent role that dentition plays in overall health, few studies have focused on the dental consequences of captivity for orca, and none have attempted to quantify the problem across multiples facilities,” the researchers wrote. It’s an issue they hope to change. SeaWorld, they say, is in a “unique position” to provide further insight by “making dental and health records publicly available.” Doing so, they suggest, could lead to better management and husbandry practices in the future.

SeaWorld has yet to respond to the study in any format. Loro Parque in Spain released a blog that presented little evidence to contradict the study. After attacking each author personally, the petulant park’s unprofessional response put a two-year-old’s temper tantrum to shame.

The hidden cost of “superior dental care” for these orcas is far worse than any outburst of animosity. Captivity has robbed them of the primary tools they need to survive in the wild. Entirely dependent on human care to stave off infection, SeaWorld’s toothless ambassadors must suffer and keep their mouths shut or become a sad representation of their wild counterparts.

Dolphin Project’s guest blogger identified the whales in the study.