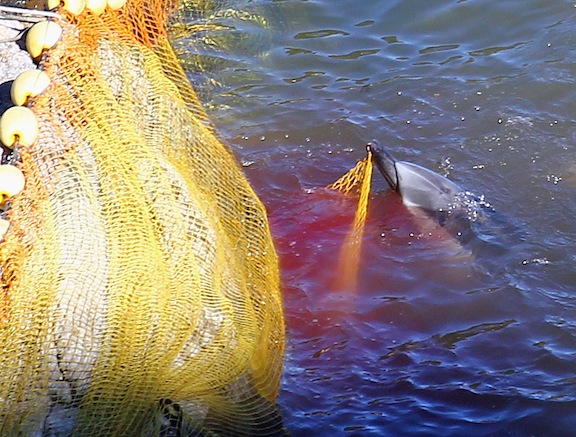 A new scientific study has confirmed what everyone pretty much already knows:  the dolphin slaughter in Taiji is conducted in an inhumane manner that no other civilized society would allow.

In The Cove documentary, there is a sequence at the very end, where one of the Japanese scientists working for the Japan Fisheries Agency explains matter-of-factly that Taiji was using a “new method” to kill dolphins by ramming a spike down into the neck of the dolphin, causing “instantaneous death”.  He was lying, of course. Louie Psihoyos, the director of The Cove who was conducting the interview, proceeds to the show the official some footage taken in the Taiji Cove of fishermen stabbing dolphins with long lances.  The official, his face becoming like stone, asks how and when Louie obtained the footage.

After The Cove was released, the Taiji dolphin hunters took new steps to avoid having people see and photograph the slaughter in the Cove.  They built an elaborate tent-like structure out of wires, cables and plastic tarps to hide the entire shore of the Cove.  And of course, they still claim the dolphin death process is “humane”.

Two years ago, our Cove Monitor Hans Peter Roth and a German filmmaker from a group called Atlantic Blue snuck into the Cove after dark and planted hidden cameras to capture the slaughter process.

In fact, this “new” process to kill the dolphins is even more horrendous in many ways than the stabbing deaths that used be used.  Dolphins are dragged under the tarps by their tails, manhandled into position as they are struggling, and a sharp spike is shoved down into their neck behind the blowhole.  As the footage shows, dolphins continue thrashing about for minutes on end.  There is nothing humane about this process, especially for sentient animals being killed beside their own relatives – sisters, brothers, mothers, fathers, and their young.  The alarm whistles and screams echo around the area.

Recently, that film footage was carefully analyzed by a group of scientists, including a veterinarian and several biologists, comparing the process used in Taiji to those used to kill large mammals in other nations for food.

Some excerpts from their paper in the Journal of Applied Animal Welfare Science:

“Our veterinary and behavioral analysis of video documentation of this method indicates that it does not immediately lead to death and that the time to death data provided in the description of the method, based on termination of breathing and movement, is not supported by the available video data.”

“This killing method does not conform to the recognized requirement for ‘immediate insensibility’ and would not be tolerated or permitted in any regulated slaughterhouse process in the developed world.”

The scientists also point out that the dolphins are lined up beside each other during the slaughter, in contrast to generally recommended practice of avoiding having other animals present during the killing process.

Time and time again, we have been told by the Japan Fisheries Agency and their allies in support of the dolphin hunts that: “You eat cows and pigs, and we eat dolphins; what’s the difference?”  They also continue to falsely claim that the killing process in Taiji is humane.

Of course, the Japanese government will simply ignore this latest evidence that their killing of dolphins and whales has no support worldwide and cannot be compared to practices in other countries.

I’m no fan of slaughterhouses in the rest of the developing world.  So claiming that the practices in Taiji are worse than in a slaughterhouse may be difficult to believe.  This scientific analysis is an excellent (if gruesome) factual description of what is wrong with the dolphin hunts in Taiji.

The hunts must end, and the dolphins must be free!