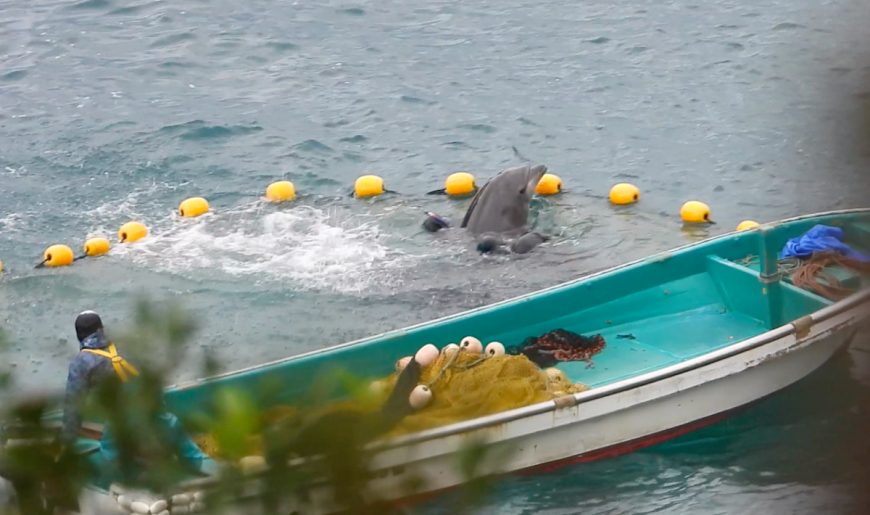 Taiji: Monday, November 25 started out as a typical dreary morning in Taiji. There was rain and high winds forecast throughout the day, and there was no sign of dolphin hunters. After an hour of waiting to ensure the hunting boats did not leave the harbor, Dolphin Project Cove Monitors called a Blue Cove, a day where wild dolphins migrating past the coast of Taiji would swim free. However, this couldn’t have been further from the truth.

On our third daily check throughout the town, there was an unexpected turn of events. Shockingly, our team discovered a pod of 19 bottlenose dolphins netted in the Cove. Even though the weather had kept the dolphin hunters at bay that morning, something must have compelled them to leave far later in the day. This has only ever been documented twice in Dolphin Project’s 16 seasons of being on the ground in Taiji. The fact that these dolphins were bottlenose and much money was at stake likely played a factor in the hunter’s efforts to capture them, despite the inclement weather.

With our hearts heavy and adrenaline kicking in, we immediately rushed up to Takababe Hill to our vantage point as the dolphins swam in a tight knit group between the nets. We noticed a skiff leaving the Cove with a few of the hunters on it and there were also spotlights assembled around the area as well as a group of security guards to take watch. It was evident that the dolphins were going to be left overnight in the Cove, without access to food or water (wild dolphins get their water from the fish that they eat), meaning this pod would be dehydrated, hungry and exhausted come sunrise. We stayed, observing the pod until the sun went down and we could no longer see, then returned to our hotel to get some rest and prepare for the next morning. It was difficult to take our minds off of the wild dolphins trapped in the foreign, eerie surroundings of the Cove.

In darkness the next morning, we climbed Takababe Hill to have time to set up our equipment and as usual, the Japanese police were in tow. As the sky became lighter, skiffs arrived one by one full of people – a combination of hunters, trainers and divers. The skiffs dropped the majority of people off on the beach before returning to the dolphins. Aggressively they revved their engines to push the dolphins further into shallow water for the captive selection process to begin. 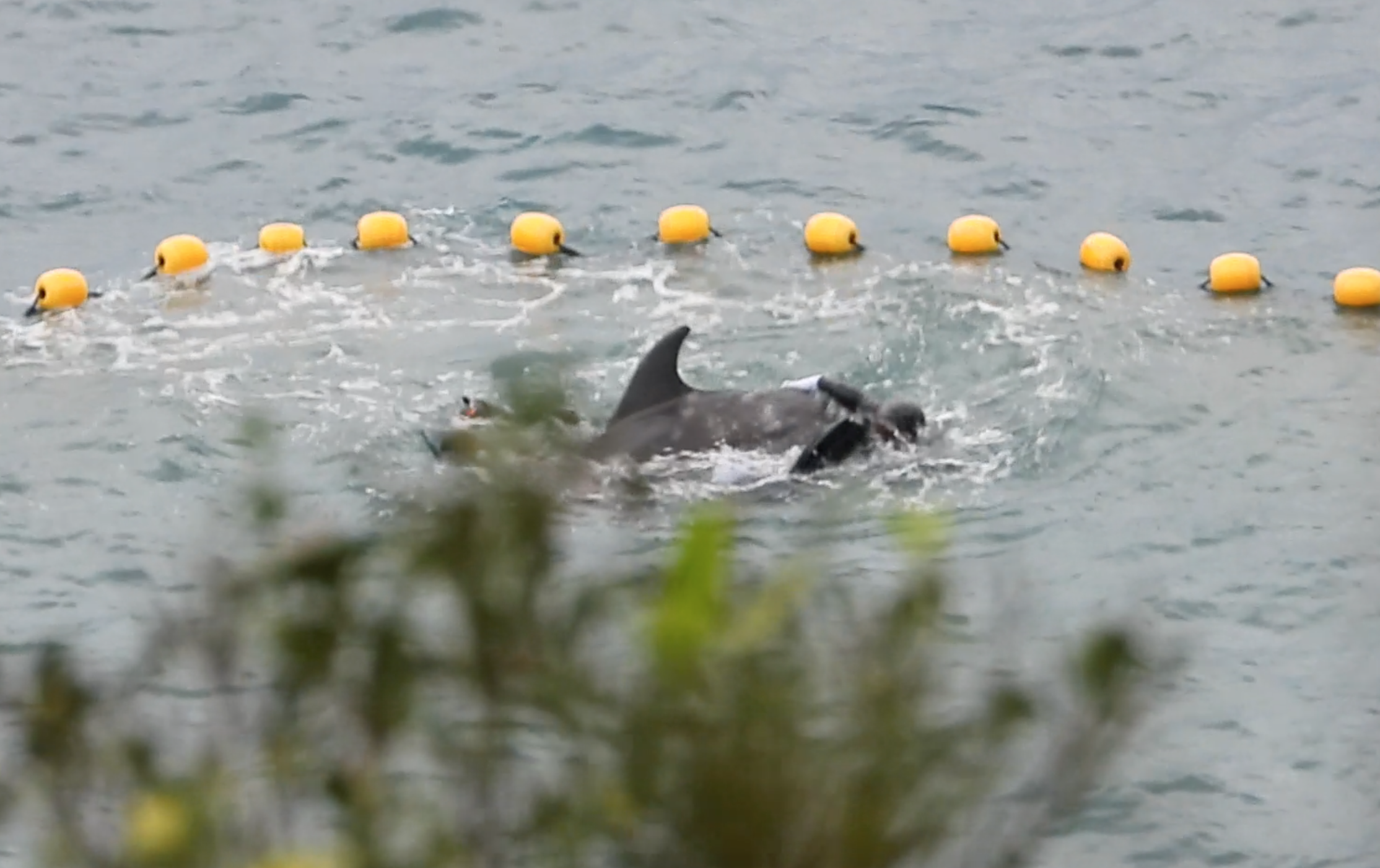 Divers wrangle a bottlenose dolphin towards shallow waters to be “inspected” for suitability for captivity, Taiji, Japan. Credit: DolphinProject.com 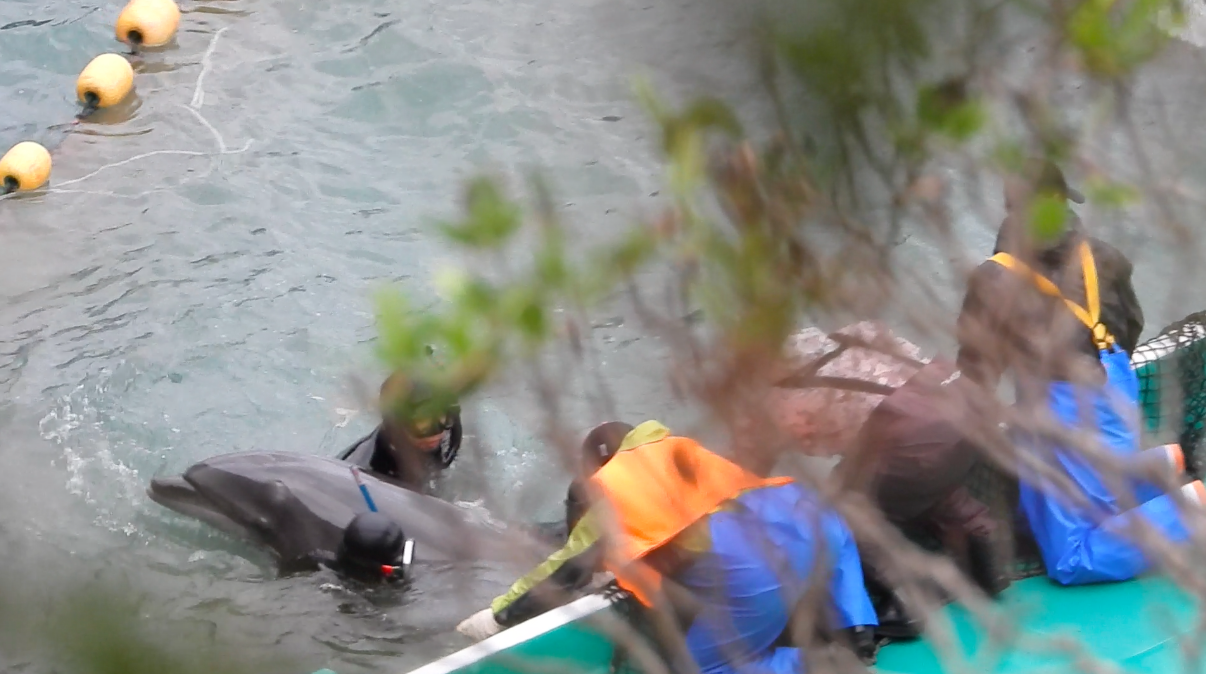 Divers were launching themselves on top of dolphins, grabbing at their dorsal fins and rostrums, maneuvering them towards hunters on boats who were ready to constrict them with nets. One diver even grabbed a dolphin by its tail fluke, and as it began to struggle to try and get out of it’s grasp, the diver was thrashed up and down on the surface of the water like a rag doll, but still gripping tightly showing no relent, completely determined to keep his grasp on the dolphin. The water was white with splashes, dolphins desperately swimming in all directions, trying to flee from the divers who were making just as many splashes by throwing themselves at the dolphins. One by one, the bottlenose dolphins were wrestled, manhandled, and inspected. Through a gap in the tarps covering the beach, Cove Monitors could see the dolphins being measured before the trainers decided if they wanted to take them or not. If they were suitable, they would then put the dolphins into slings, and strap them to the sides of skiffs to be dumped into pens in either the harbor or Moriura Bay. The whole process lasted for over two hours, before eventually ten dolphins fitting their requirements were deemed attractive enough to be put on display. Two skiffs left the Cove with four dolphins, both directly heading to the harbor pens. Then, another two skiffs left with one dolphin on each – one went to the harbor pens and the other to Dolphin Base in Moriura Bay. (Later, our team located the newly captured dolphins in their respective pens and will continue to keep an eye on their wellbeing.)

The remaining nine dolphins who had been rejected by the trainers, either for their scarring (a couple of dolphins looked as if they could’ve had run-ins with sharks with jagged edges to their dorsal fins resembling teeth marks), size or age, were driven out to sea by five banger boats. Not only had they experienced the same process of being jostled and scrutinized, they had just witnessed the majority of their pod be whisked away from them forever, the family ripped apart, never to see one other again. A couple of the remaining dolphins appeared to have white/yellow tags clipped to their dorsal fins, so that if the hunters encountered these dolphins again, they would know that they had already been examined. However, the rest did not, including at least two small juveniles, potentially suggesting that they might capture these young dolphins again one day. 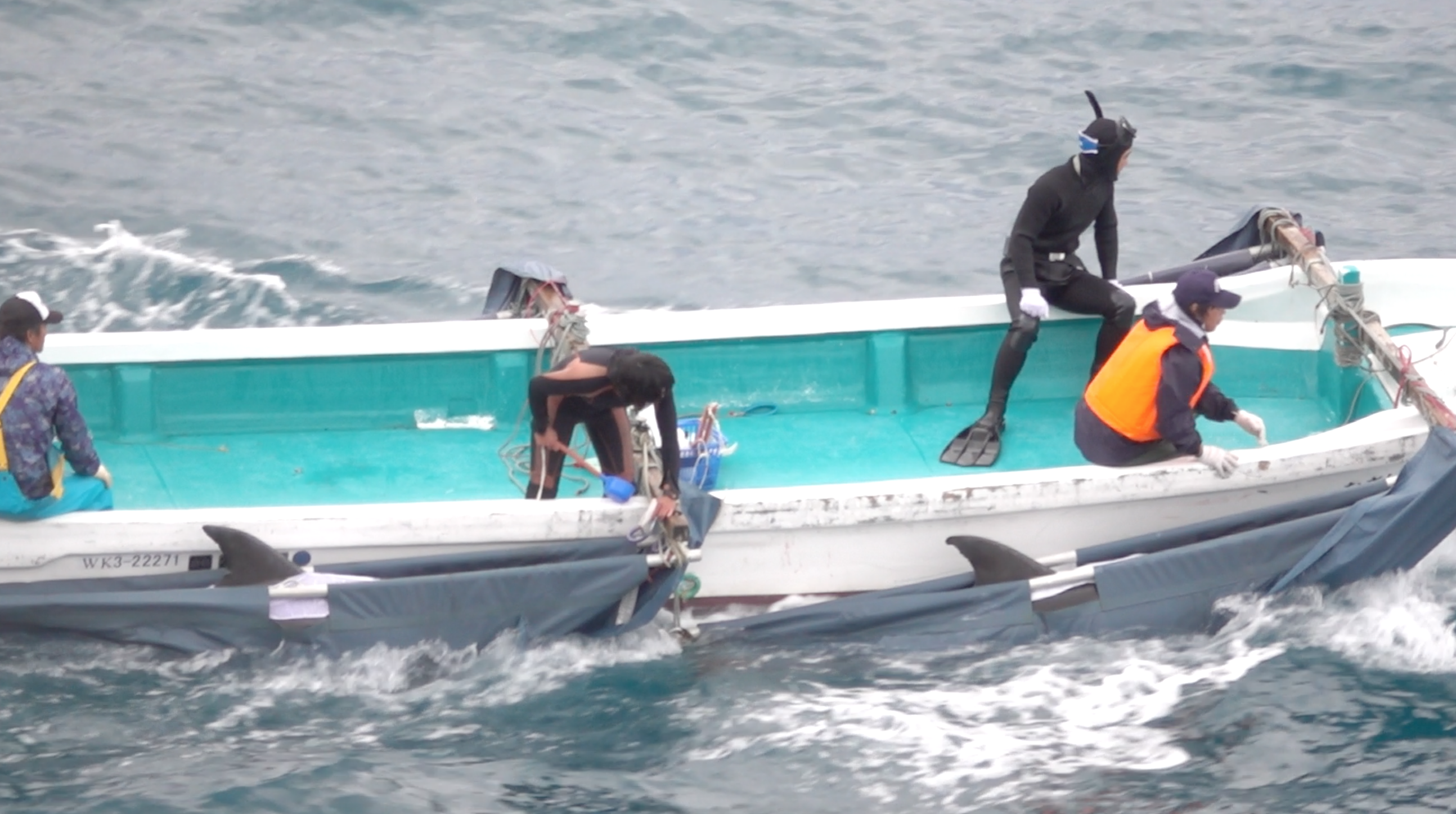 Dolphins considered “desirable” enough for captivity are taken out of the Cove in slings, their freedom forever stolen. Credit: DolphinProject.com 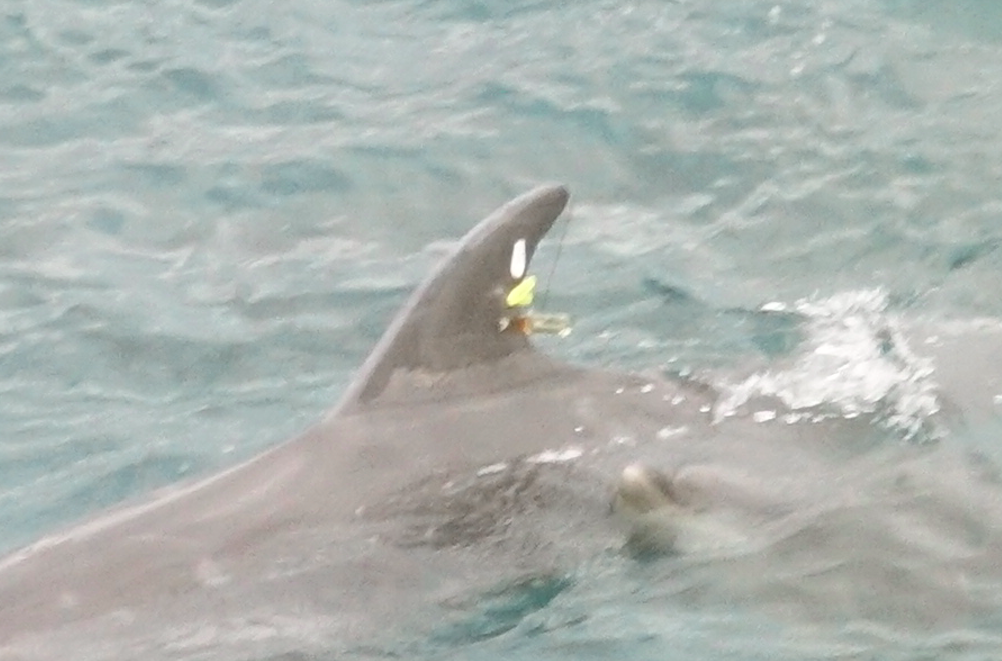 Dolphins not selected for captivity are tagged prior to release, Taiji, Japan. Credit: DolphinProject.com

All of this atrocious behavior was done in the name of profit. Highly trained bottlenose dolphins can be sold for upwards of $100,000 USD. The hunters and the captive facilities involved in this selection  process were only thinking of the money in their pockets. The captivity industry has no concern for the protection of dolphins.

Particularly in the last week, we have seen more and more harrowing consequences of the captivity trade. On Monday November 18, we stumbled upon a pilot whale and a Pacific white-sided dolphin being medically examined at Dolphin Base – an invasive and stressful event. On Friday November 22, we witnessed two dolphins being transferred between pens at the Taiji Whale Museum pens in Moriura Bay. One of these dolphins was deliberately and aggressively hit in the head by the knee of a trainer who was attempting to subdue the mammal. On Saturday November 23, new pens had been added to Dolphin Base’s facility, and on the day of the bottlenose drive, more pens were being constructed in the harbor carpark, solidifying Taiji’s plans to add to their captive facilities.

The captivity trade is undeniably the fuel for the slaughter of hundreds of dolphins every season. The profit made from slaughters is not sufficient to sustain the livelihoods of all the hunters, and does not compare to the amount of money they receive from live captures. Dolphin meat contains high levels of mercury, which if consumed on a regular basis, can cause detrimental health defects. For this reason and others, the number of people eating dolphin meat has dwindled over the years. Despite this, last Sunday another pod of melon-headed whales was slaughtered in the Cove.

These hunts are defined by ‘supply and demand’. We must cut the demand for captive dolphins in order to cut the supply and put an end to these hunts, once and for all.