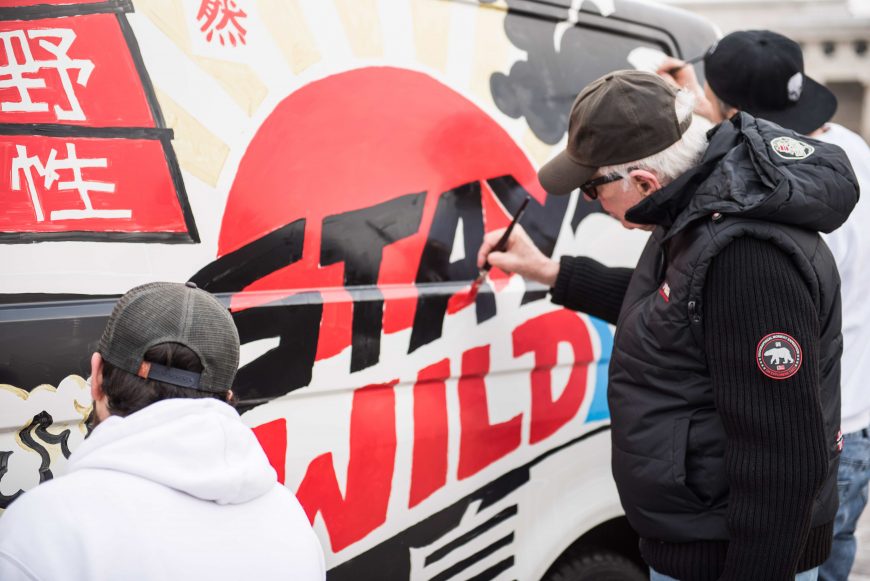 This art event completes a series of activities by Ric in Vienna, Austria and was a call for dialogue with Japanese decision makers to end dolphin drive hunts in Taiji, Japan, as documented by the Academy Award-winning documentary “The Cove.” The idea was to turn a bus into a moving and symbolic statement and drive it to the Japanese embassy to engage in discussion. Sadly, the embassy refused our invitation to have a face-to-face meeting and talk.

Despite this snub, the message got through to the people of Austria, with newspapers, television, radio and even screens in Vienna’s public transport system reporting on the “driving statement,” in addition to Ric’s visit. The action was an initiative by Viennese campaigns agency Shifting Values, in cooperation with international marine conservation organization OceanCare to support Dolphin Project.

Stay Wild says it all. We now spread this message far and wide, via the universal medium of art.” ~ Ric O’Barry, Founder/Director of Dolphin Project. The artwork:   #StayWild, created by Austrian artists Axel Just and Benjamin Fillitz, evokes the attempt to establish a dialogue via strong imagery which describes the problem in both a factual and aesthetic way. Various quotes from the Japanese history of art are interpreted in a contemporary way, symbolizing a reverence to Japan’s culture. The visual language that appears partly propagandistic in this composition, combined with the Japanese characters for animal, nature, wildness and freedom, as well as an unorthodox archaic dolphin illustration, is both a demand and a call for protecting dolphins as free and wild creatures of the sea. Dialogue is critical to any change. We are available to talk to the Japanese decision makers and representatives at any time, but it tells a lot if they continue to refuse to discuss the issue. Awareness will ultimately end the dolphin drive hunts. The question is simply – when.” ~ Nicolas Entrup, founder of Shifting Values. The message: We encourage the public of a country where no dolphins are held in captivity to take the pledge to NOT buy a ticket to a Dolphin Show.

Thank you to our guest blogger Nicolas Entrup, Founder, Shifting Values for text and photos. Many thanks to Thomas König for his efforts and support.

Watch the video below.