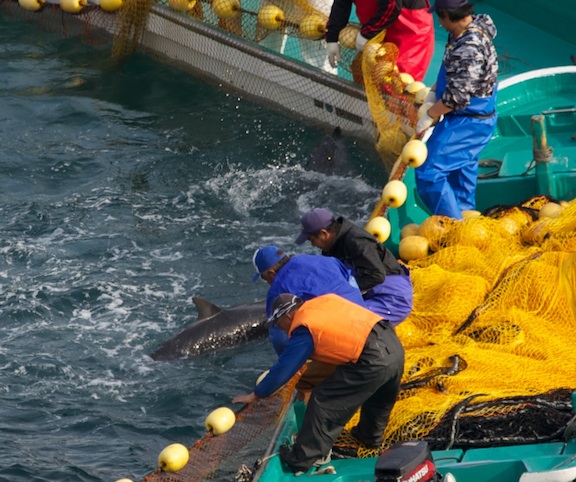 (Note:  Terran looked again through his photos, and believes the dolphins were spotted rather than striped dolphins.  We’ll go with his judgement and have subsequently changed this blog.  — Ric O’Barry)

Day started similar to any other day when the drive fishery dolphin drive boats go out hunting.  Quickly I knew this was going to be a very different day.  I started tracking the boats in drive position, but then I noticed two separate pods were being driven.

Could see one pod was numerous, but the second pod was very large: maybe 60-100 dolphins in size.  Drive boats were able to get both pods near Taiji harbor fairly quickly.  It became very apparent the fishermen could not handle the largest pod and decided to split them – in a VERY direct and brutal fashion – by driving directly over the pod with their skiffs.  Once the pod was separated, the dolphin hunters began driving one half away, but the dolphins did not want to go so easily.  Clearly, they knew their family was being separated and were very scared.  I could see the dolphins turn around and escape the driving boats to return back, only to be driven back out again.  Once the dolphin hunters got the orphaned pod past the fishing nets outside the harbor, the drive boats returned to help push the remaining dolphins into the Cove.

Drive boats and skiffs both work in a team to push the dolphins into the Cove.  They had two pods today to work with: one was being driven, and the next was being held back.  The first pod decided it should try and escape to the second pod, and escaped the drive boats twice before being reunited with second larger pod.  This didn’t matter to the killers – they had their prey and were going to get them into the Cove no matter what.

Once both the pods were combined, they were netted in the Cove.  Skiffs and divers separated the large (now single) pod into three netted areas.  Much easier working with fewer dolphins at a time and giving them less room to swim around.  It was all very systematic.

I estimate that the first group was around fifteen Pantropical spotted dolphins.  Of those dolphins, nine were taken for captivity and one of those included a juvenile/baby.  I later learned that two of those taken died in the process or shortly after and then taken to butcher house.  When the trainers choose which dolphins to take for captivity, it is a very aggressive, brutal, and tiring experience for the dolphins.  Divers will grab each one by the dorsal fin to slow them down and direct them to a skiff for loading to be brought to the sea pens.  I believe spotted dolphins are smaller than bottlenose, so they are loaded into the skiff instead of loaded in carriers/slings along the sides of skiffs.   Also, they weigh less.  It is apparently far more desirable for them to be loaded in the skiff – to HIDE them from US and our cameras with tarps.

Everything is hidden here.  And today showed just how much the dolphin hunters know about our vantage point.   All their work was under tarps or on the far right side of the Cove, where we cannot see from the only vantage point available above the Cove on Takabe Mountain.  You will see in most images some blurring or brown hazy area – these are branches and leaves from all the trees we have to look through just to gain the information we provide here.

Ropes are placed around the tails, and then the dolphins are dragged to the killing area under the tarps.  The second set of dolphins has now been pushed into the smaller netted area.  Once the killing has started, we, far above them, can hear them thrashing trying to escape, but they are not in enough water to get away.  Screaming starts. The thrashing is so loud it drowns out all the sounds from crashing waves.  Even the yelling of the killers is muted.  The screaming.  Oh the screaming.  OMG

The third set of dolphins is now within the smaller netted area.  Two dolphins get trapped in the nets trying to escape.  With all their might they try and fail.  We feel totally powerless to help – it is all we want to do!  Divers push and pull them out of the net, only so the freed dolphins can swim directly into the killing area and be grabbed and stabbed until dead.  I know that sounds bad, but it is the truth.   The Cove turns red again.

We hear loud banging in the Cove.  It is the dead pod being thrown into the skiffs, one after the other, for transport to the butcher house in the harbor.   Skiffs arrive in the harbor and drive through a “hiding” cave built of plastic tarps to allow them to transfer their kills without anyone seeing anything.

Japan’s self-imposed limit for the Taiji drive fishery quotas allowed for an additional 314 spotted dolphins to be taken according to Ceta-Base accounting.  My estimate of the dolphin count today: seven kept for captivity and at least 36 dead.