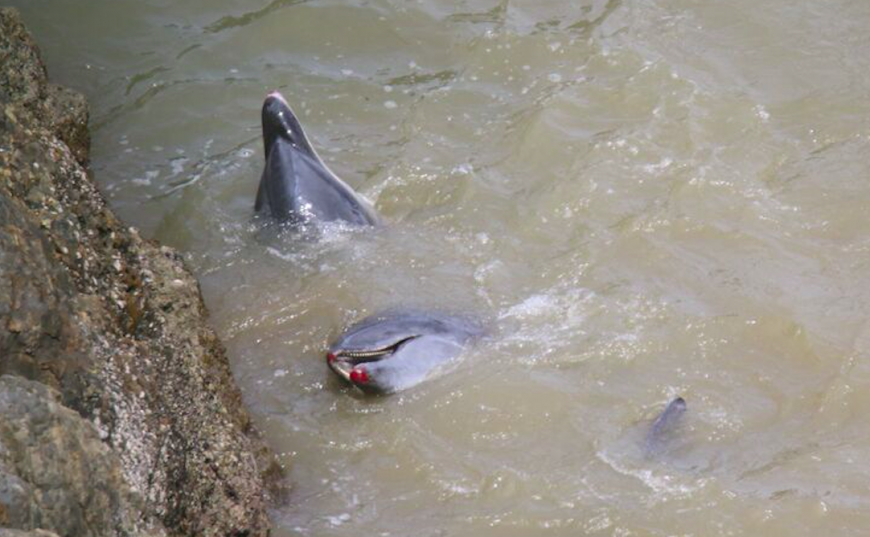 Day Two – September 17, 2016, Taiji: By 5:30 a.m. the cove was already bustling with activity. Four skiffs carrying fishermen, divers, trainers and buyers would set the stage for the remainder of the day. The atmosphere could almost have been carnival-like, with shouting, splashing and boats coming in and out.

Except for the 80-100 bottlenose dolphins held overnight, with no access to food or freedom.

Instead, what enfolded was a macabre display of callousness, aggression and a complete disregard for the terrified, sentient beings who were now in the process of being sold into a life of servitude.

Nets being pulled tighter around dolphins to push them into shallow waters.
Credit: DolphinProject.com

The captive selection process was brutal. Dolphins were wrangled, grabbed and jumped on as they were pushed as close as possible to the beach. Nets were thrown to immobilize the mammals.” ~ Daniela Moreno, Dolphin Project Cove Monitor

Underneath the tarps, shouting was heard as buyers negotiated the price for each dolphin.

These two are mother and baby. Which one do you want? Do you want both?” ~ Translated from Japanese as sellers negotiated the price

As the day wore on, the dolphins became more panicked, more exhausted. Some were caught in nets while others threw themselves up against the jagged rocks.

Trainers and divers would literally jump over the dolphins, grabbing them by their fins to push them towards the skiffs, where hunters were waiting to drop nets on top of them. Multiple dolphins were caught in the nets in shallow waters. I could hear the dolphins communicating with each other as they fought for their lives. It was heartbreaking.” ~ Daniela Moreno

Bloodied dolphins after throwing themselves up against the rocks.
Credit: DolphinProject.com

Dolphin Project Cove Monitors live streamed dolphins rolling over onto their backs, either too injured or too weak to keep themselves upright. Throughout all of this, laughter and cheers were heard as trainers worked alongside hunters, plucking dolphins out of the pod to be shipped to aquariums and marine parks throughout the world.

By around 1:00 p.m., the cove quieted as skiffs left for the day. For seven hours, the brutalized mammals witnessed their pod members being wrangled into slings, and by the time it was over, a total of 38 bottlenose dolphins had been taken captive.

Approximately 150 bottlenose dolphins have been “pre-sold” to Japanese dolphinariums, with the biggest exporter being China, followed by Russia, Turkey, Dubai, Korea and other countries.” ~ Ric O’Barry, Founder/Director of Dolphin Project

And what of the pilot whales?

At the time of this writing, the pilot whales have been confined in the cove for over 36 hours with no access to food or freedom. Our Cove Monitors have documented several juveniles in the pod, along with a baby, quite possibly a newborn. One larger adult continues to circle the group while the other bob in the water, their fate, to be determined.

Watch the videos below, taken at the end of the day. Bottlenose dolphins are both agitated and exhausted, while pilot whales await their fate.