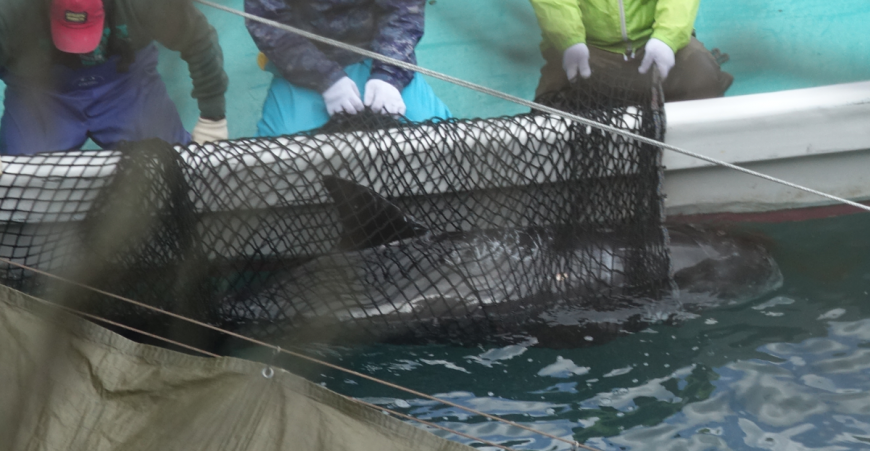 From the drive hunts and inhumane captures and slaughters, to apparent neglect towards captured dolphins, the cruelty towards dolphins is limitless in Taiji, Japan. Thankfully, this week additional voices for dolphins came from Japanese activists.

The week began with a very strong storm. Gale force winds and large swells kept the dolphin hunting boats in the harbor for four days in a row. While wild dolphins swam free, the dolphin captured in previous drive hunts endured yet another aspect of suffering.

The swells were strong enough to make their way deep into Moriura bay and the harbor, where many captured dolphins are contained in sea pens. With nowhere to escape, these dolphins were battered by the surge in the water, debris and runoff. We documented captive dolphins at Dolphin Base, a sea pen facility which was in the forefront of the path of the entering swells. The two most exposed sea pens on the far right were in shambles. Two parts of their wooden walkways snapped, and several of the floats came loose, adding even more debris to be tossed around in the already overcrowded captive dolphins’ space. 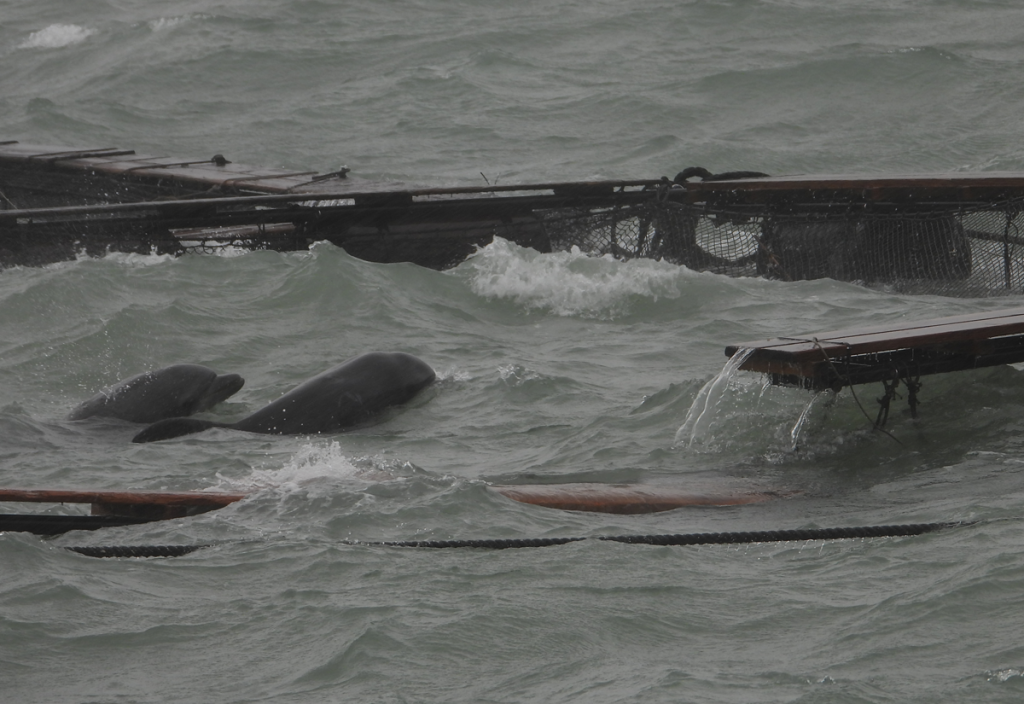 Dolphins captured just a few weeks ago are trapped in a sea pen amid a strong storm | Credit: DolphinProject.com

The day following the storm, we observed a few of the dolphin hunters working with dolphin trainers to retrieve a body from one of the harbor sea pens. At least one dolphin perished from the storm. They hid the process well, with strategic placement and generous use of tarps to cover the body. The dolphin was taken to the “butcher house” building in the harbor to be processed. It is not likely that this dolphin was used for human consumption; to our understanding, only dolphins that are intentionally slaughtered may be used for meat. 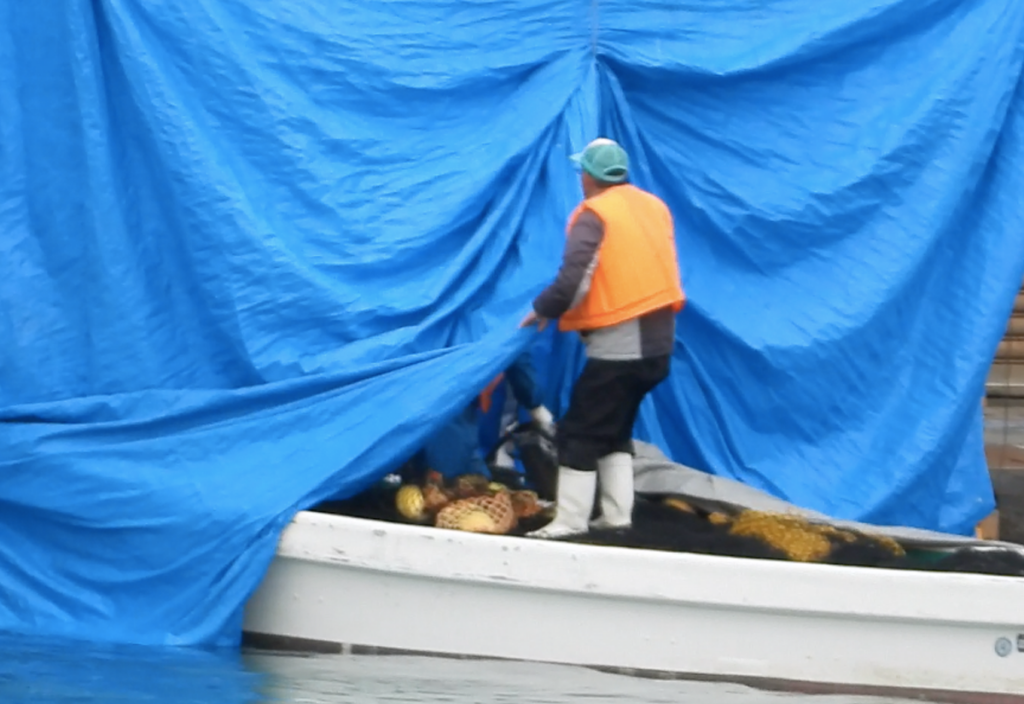 After the storm and residual swells passed, the hunters departed to search for dolphins on the morning of January 30. They moved around erratically shortly after leaving the harbor. Once they reached the horizon, they located a pod of dolphins and began driving them towards shore. The process was long and painstaking. As the pod dove down for several minutes at a time, the hunters would lose sight of them. As they surfaced again at a distance, they would go back and chase after them. This cycle lasted for several hours, up until they nearly reached the harbor mouth. After an additional 30 minutes or so of battling near shore, the hunters gave up and the dolphins were able to escape. An extremely close call, and an amazing victory for the pod! 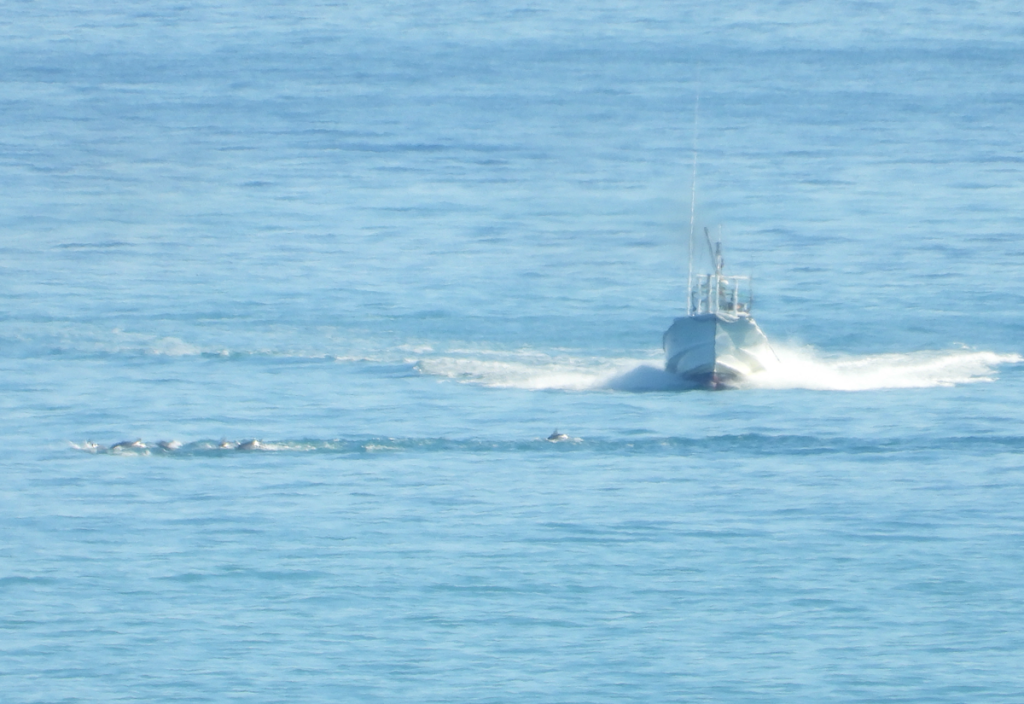 This lucky pod of dolphins was able to escape after the hunters gave up on chasing them. | Credit: DolphinProject.com

On January 31, luck was not on the dolphins’ side –  at least, not for Risso’s dolphins. After leaving the harbor, the hunters quickly found two groups of dolphins not very far out. They created two separate drive formations and began pushing the dolphins towards the Cove. The first group was a small group of Risso’s dolphins. The second group appeared to be a fairly large pod. The hunters struggled to bring in the second group, and ultimately lost these dolphins seemingly due to a large ship that crossed in front of their path.

The Risso’s dolphins fought to get away, going down on long dives and surfacing in various directions. These dolphins spend much of their time in deep offshore waters, and resisted to go into the coastal shallows. But eventually the hunters resorted to putting out a net behind the pod, pulling it in closer and closer to the Cove until they were sealed in. Even dolphin trainers joined this process on an additional skiff, harassing the pod into the Cove. 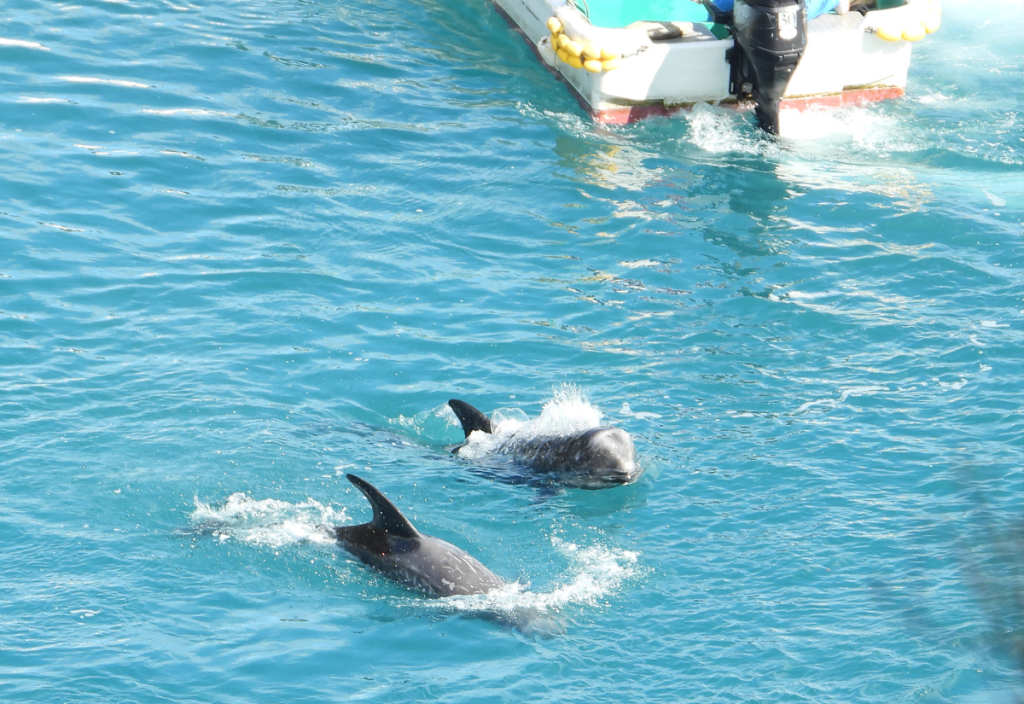 Risso’s dolphins are chased deeper into the Cove by a hunter’s skiff | Credit: DolphinProject.com

As the hunters and trainers started to bring dolphins onto the beach for the captive selection process, two of the dolphins panicked and got caught in one of the nets. One got free fairly quickly, but the other was severely entangled. Two divers came to disentangle it, only to place it in a new net, dragging the mammal onto the beach for inspection by the dolphin trainers. The trainers ultimately chose one dolphin to take for display purposes, and left the remaining pod to be slaughtered. 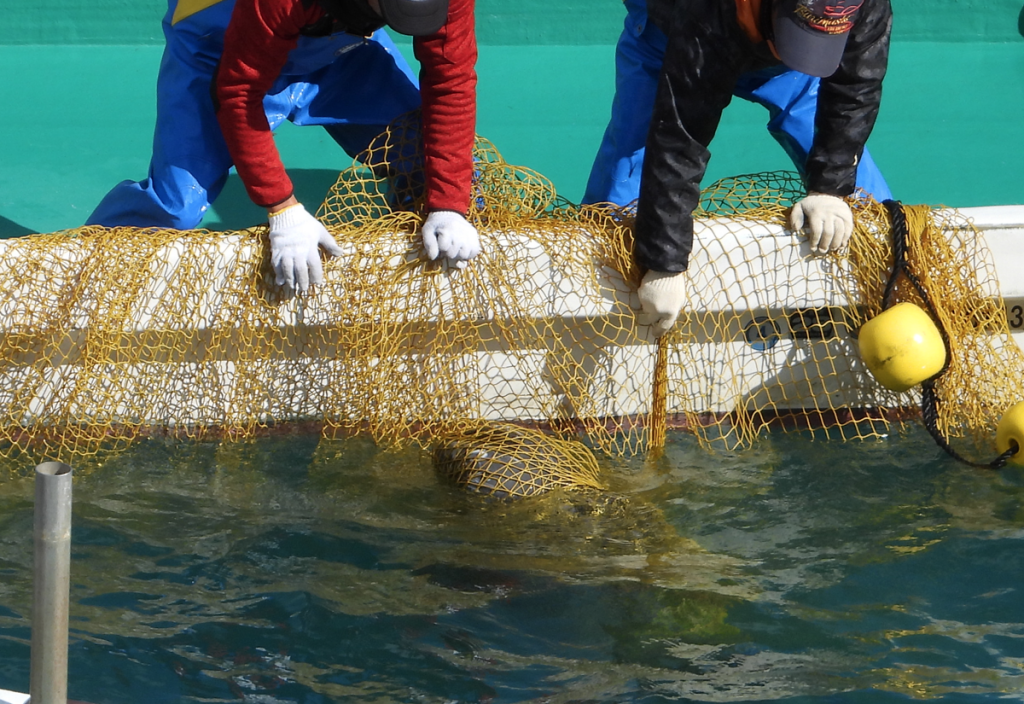 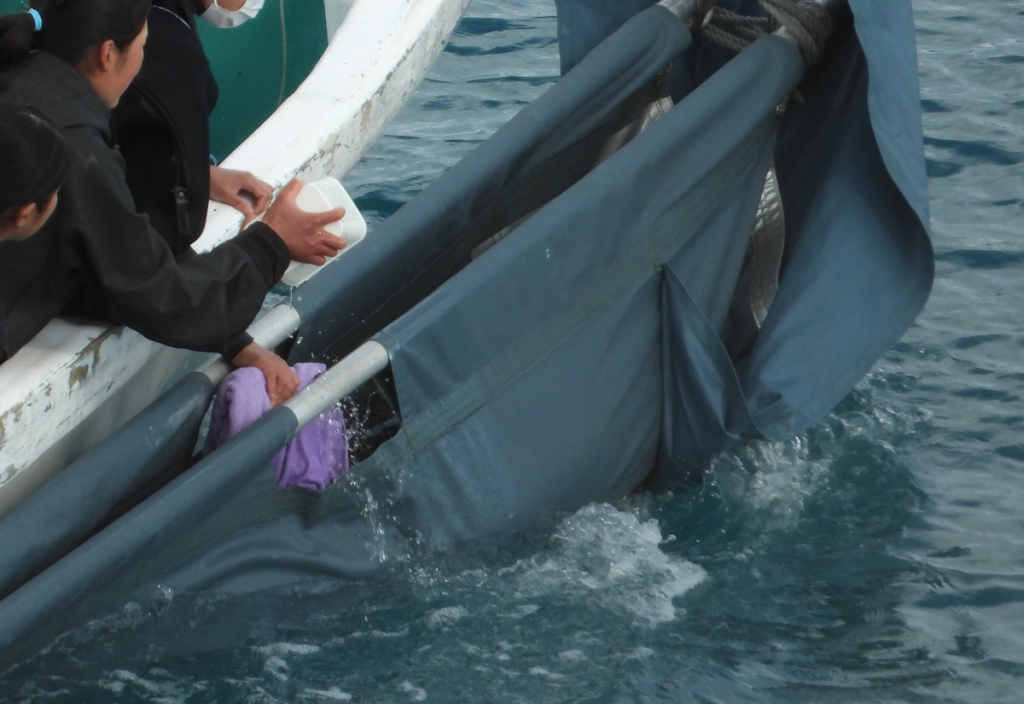 Several Japanese activists joined us in the following days, monitoring the dolphin hunts and doing outreach within Taiji. A few of the activists put out an educational display on the drive hunts and their connection to dolphin captivity, and performed several powerful speeches as spectators of the Taiji Whale Museum dolphin show were in earshot.

The group was made up of a variety of individuals from different backgrounds, some of which travelled several hours just to be in Taiji. Word of mouth is a particularly powerful tool among Japanese communities. The culture and mannerisms of Japan are very nuanced and differ greatly from individualistic Western culture; outreach and education presented by Japanese people themselves are vital. 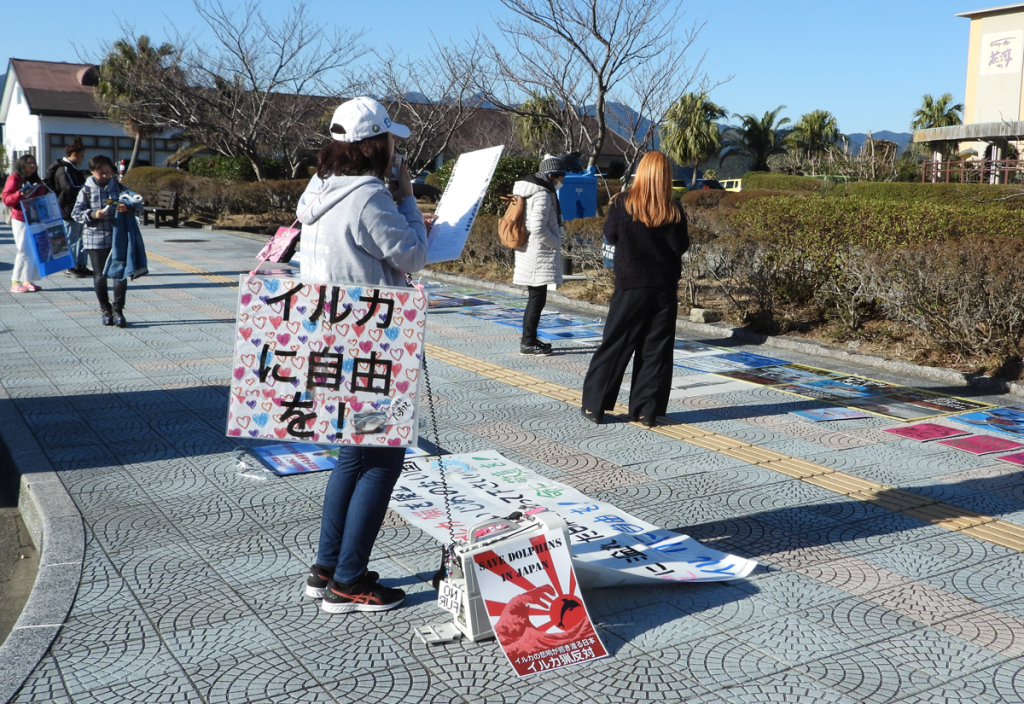 An anti-captivity demonstration put on in front of the Taiji Whale Museum by Japanese activists | Credit: DolphinProject.com

On February 2, the dolphin hunting fleet happened to find a fairly large pod of striped dolphins. All twelve boats relentlessly chased after the dolphins until they reached the shallow waters near the Cove. Some of the Japanese activists stood on the public area surrounding the Cove and continually cried out to the hunters, begging them to stop killing dolphins and to give the dolphins’ freedom back. 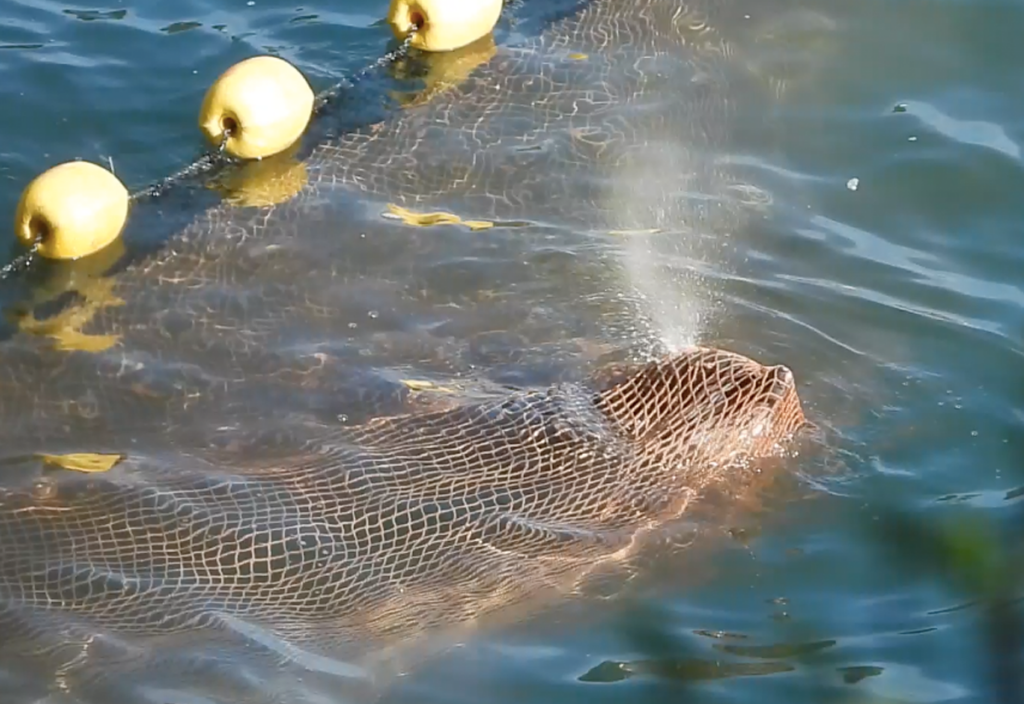 A striped dolphin takes a breath as it swims into a net. | Credit: DolphinProject.com

As a primarily offshore species, coves and beaches are a foreign environment for striped dolphins. These small yet robust dolphins are capable of diving great depths, but unfortunately these features are overlooked by those in the captivity industry. The Taiji Whale Museum’s current dolphin show features a segment with striped dolphins, as the narrator brags that the facility is essentially the only place in the world to “successfully” tame and train striped dolphins. A striped dolphin is also depicted on the cover of their latest brochures. Several Taiji Whale Museum trainers participated in the striped dolphin hunt, by selecting three individuals to take from the family group for captive display. 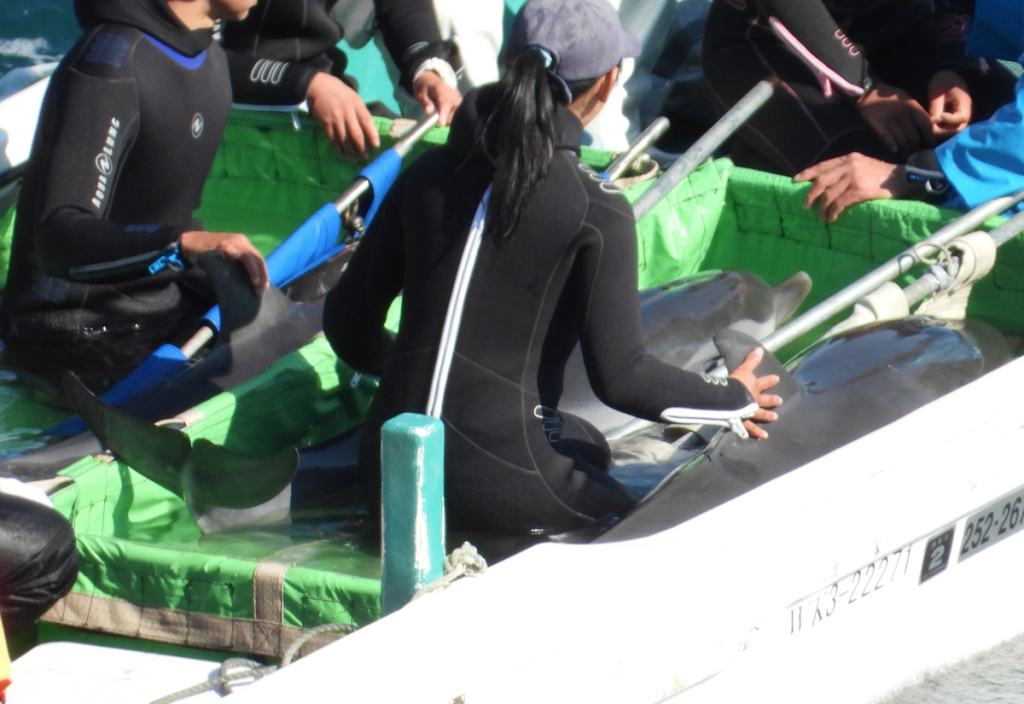 The remaining pod of roughly thirty seven dolphins was heartlessly slaughtered over the course of several minutes under the cover of the hunters’ newly re-arranged tarps. For sentient, self-aware, highly social and incredibly intelligent marine mammals, their suffering while watching family members being killed is unimaginable. 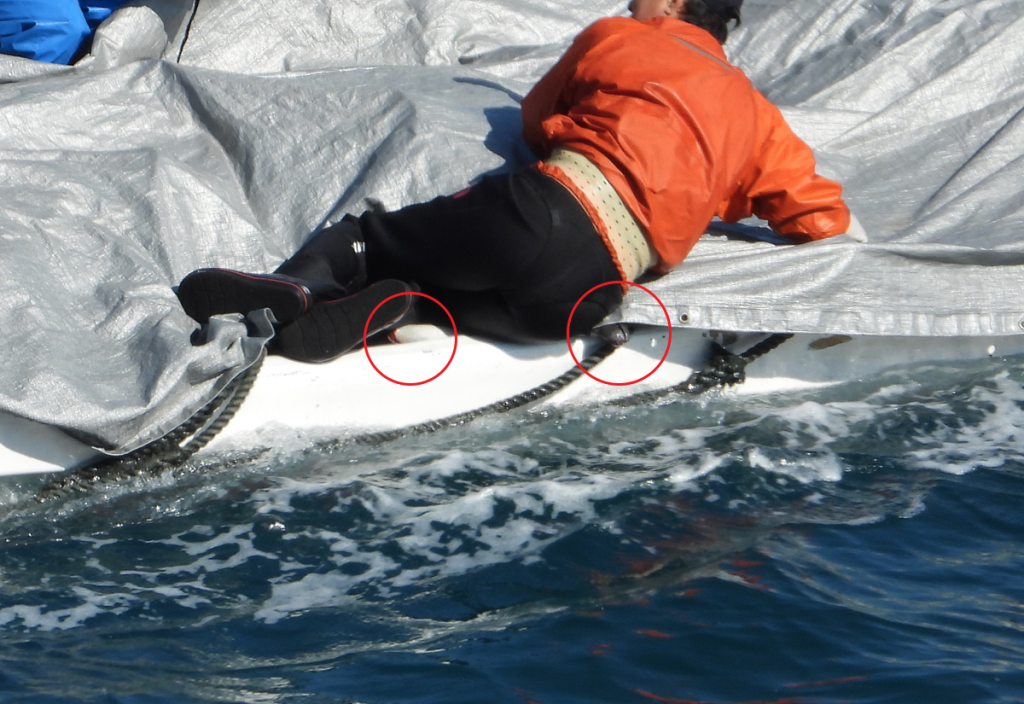 It is up to those of us who are aware of Taiji’s dolphin hunts to continue to spread awareness and ignite action both within Japan and all over the world, particularly in countries with dolphinariums that purchase Taiji’s dolphins. Together, we are a voice for dolphins.