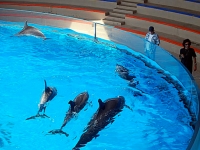 As you know, SeaWorld has been being pummeled over the past week as a judge hears from the US Occupational Safety and Health Administration (OSHA) and witnesses about the accident in 2010 in which trainer Dawn Brancheau was killed by a captive orca named Tillicum.

SeaWorld is fighting being fined by OSHA and by proposed regulations from OSHA that would effectively bar trainers from entering the waters with captive orcas, threatening SeaWorld’s profits of which 75% is attributed to the orca shows alone.

Many former SeaWorld trainers have come forward expressing their concerns that SeaWorld was covering up the dangers trainers faced in working with orcas and that orcas are simply not suitable for captivity.

Now, SeaWorld, in addition to fighting in court, is trying to snow the public with a new press release, entitled: “SeaWorld Uses Ingenuity to Save Rescued Whales, Dolphins, Sea Lions.”

The PR statement says: “Few are aware that SeaWorld operates one of the world’s most respected wildlife rescue programs and has treated more than 18,000 animals over the last four decades.”

You can read the full SeaWorld press release here:

Yes, SeaWorld saves some marine mammals. This is true.
But everything is relative.

Relative to the profit that SeaWorld makes every year ($1.4 billion last year) their rescue program is but a token effort.

And contrary to their claims in their press release that the “goal for every rescue is to be able to successfully return the animal,” SeaWorld often keeps these animals in captivity for their displays and shows instead of releasing them back into the wild.

(The federal Marine Mammal Protection Act states that captures of marine mammals for captive purposes must be done in a humane manner.  This is why SeaWorld and other aquariums in the US have not captured any new dolphins in the wild for a number of years – capturing dolphins and orcas in the wild is inherently an inhumane practice involving nets, chases, and often drive hunts that kill many of the animals outright.  On a complaint filed in 1992, the federal government blocked the import of cetaceans from Taiji to Six Flags Discovery Park (formerly Marine World Africa USA) in Vallejo, CA, due to this law, and ever since US marine parks like SeaWorld have had to either breed their own dolphins and orcas in captivity or retain stranded animals by claiming they could not be released back.)

If they were here in Thailand helping the Dolphin Project Team and I stop these two new dolphin abusement parks from starting up, and in the Solomon Islands and Taiji, stopping the trafficking and slaughter of thousands of dolphins, or in the desert of Egypt speaking out against captive dolphin abuse, or in Indonesia doing something to end the extreme suffering of captive dolphins in traveling circuses, then SeaWorld might have some credibility.

But they choose to pretend the abuse and suffering are not associated with their industry.  They refuse to police their industry and help abolish the dolphin trafficking conducted by “Ocean Embassy” (former SeaWorld trainers Ted Turner, Robin Friday et al).

They refuse to help crack down on fellow member aquariums in the World Association of Zoos and Aquariums (WAZA) which, as we speak, are getting dolphins from the inhumane and bloody dolphin drive hunts in Taiji, Japan.  Indeed, the Taiji Whale Museum, which supervises the hunts and trains wild dolphins for captivity is a member of JAZA, the WAZA affiliate in Japan!

Theirs is an industry of hypocrites.