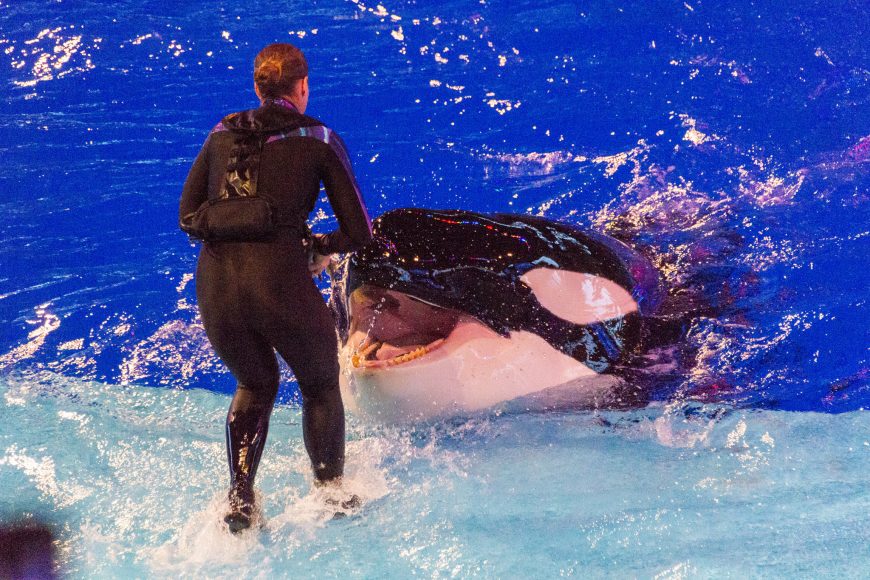 On Monday, SeaWorld San Antonio announced that Unna, an 18-year-old captive orca, had died earlier in the day. Just shy of turning 19, Unna had been under intense medical treatment for a resistant strain of candidiasis, which had inflamed her bladder since September. She is the third cetacean that has died at the San Antonio park in the past six months, following the death of a two-year-old beluga named Stella, in November, and prior to that, a premature calf born died in July, after failing to gain weight during it’s first month of life.

An official cause of death has not been announced, but her infection could have been an influencing factor. Candidiasis is a common mycotic infection, forming lesions and ulcers in and around bodily orifaces. Marine mammals with the affliction, exhibit concerning behavior such as “gastric or esophageal distress, reluctance to swallow food, vomiting, head shaking and retching.” Needless to say, Unna had likely suffered greatly over the past three and a half months.

When caught early, a patient has a greater chance of recovering. According to the Merck Veterinary Manual, the key causes of fungal infections are “stress, unbalanced water disinfection with chlorines, or indiscriminate antibiotic therapy.” Given Unna’s chronic tooth issues (several of her teeth needed drilling), it is plausible antibiotics were liberally prescribed as a preventative measure. Unna in October; the candidiasis ‘tattoo’ can be seen in the highlighted area. Photo: SeaWorld

Unna was given medical treatment since news of her diagnosis broke in autumn. Over the next two weeks, when it became clear the initial barrage of anti-fungal medications were not making any progress in slowing the infection, veterinarians chose a different anti-fungal treatment that had been used intravenously for more than a decade to treat infections in humans but never on a cetacean. The last update on December 11th, hinted at a “cautiously optimistic prognosis” but was dampened by news of the alternative therapy’s results: Initial urinalysis results following the treatments were encouraging, but subsequent lab work showed she hadn’t fully cleared the infection. While Unna had been at the San Antonio park for much of her life, she was not raised there. Born on December 27, 1996 at the Orlando park, she was the fourth calf for Katina; with her father being Tilikum, the subject of the 2013 documentary “Blackfish.” She grew up amongst her brother, Taku, and older sister Kalina, for the first five years of her life. In December 2002, she would be separated and sent westward to San Antonio, which was in dire need of replenishing their pools after losing three of their female orcas (Katerina, Haida 2, and Winnie) in the span of four years.

While described as “good natured and energetic” in her SeaWorld animal profile, her physiological and psychological health might have reflected a different reality. Former SeaWorld and Marineland Antibes killer whale trainer, John Hargrove, has spoken before about Unna’s habit of stripping paint off the tank walls, a probable contributing behavior to her broken and worn teeth. As stated in Hargrove’s book, Beneath the Surface:

“Unna went at the wall paint with such a frightening vigor that she bloodied and bruised her jaw. She would strip so much paint off the floor of the pool that I had trouble figuring out where I was while performing with the whales underwater, all the familiar geography of the pool having been transformed by Unna’s peeling.”

In addition, Hargrove elaborated how she had been on medication since 2006, following a miscarriage. Originally slated to be sent to Loro Parque along with Keto, Tekoa and Kohana, when it was discovered she was pregnant (in 2005), SeaWorld instead chose to send Skyla in her place. Veterinarians recommended that trainers separate her from the males during her estrus cycles, in order that she not become pregnant again. Other fungal infections stumped the most experienced veterinarians, who at one point suspected a food allergy and thus, smelt was eliminated from her diet.

With Unna’s passing, SeaWorld cancelled the rest of Monday’s shows. Yet on Tuesday, it was business as usual, as if nothing happened. The show must go on and indeed, it did, as the SeaWorld circus continued to profit at the expense of the animals.