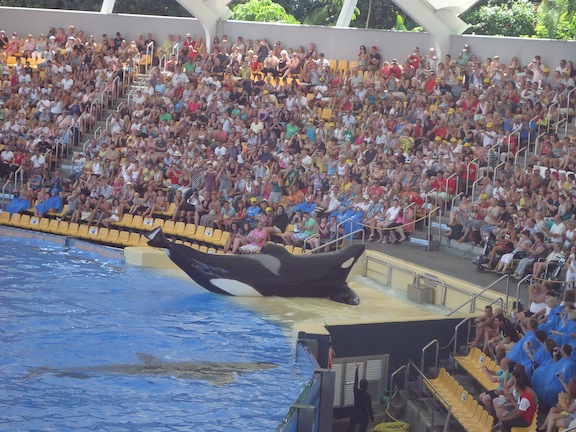 We at Ric O’Barry’s Dolphin Project are considering giving SeaWorld’s PR team a special prize for their unintentional promotion of the riveting new documentary,Blackfish, a film by Gabriela Cowperthwaite that was just aired on CNN last week (CNN will air the documentary again, so watch your local listings if you missed it).

I saw Blackfish earlier this year in Florida and was very impressed.  Apparently, SeaWorld has decided to fight against the film, sending a detailed criticism to fifty film critics just in time for the film critics to realize the film was controversial.  Good timing!  SeaWorld claims the film is “shamefully dishonest, deliberately misleading, and scientifically inaccurate.”  Blackfish’s makers have responded point by point to the SeaWorld criticism.

Needless to say, SeaWorld’s 11th hour attack on Blackfish garnered many more stories in the media nationwide, ensuring a strong run in film theaters and on CNN.

Blackfish is about SeaWorld’s largest orca, Tillikum, who in 2010 killed orca trainer Dawn Brancheau before a shocked audience.  Tillikum has been involved in the death of two other people.  Yet, knowing how dangerous this animal is for trainers, SeaWorld continues to use Tillikum both for his semen in their artificial breeding program and for conducting shows for the tourists who come to see Tillikum and other orcas do stupid tricks.

Tillikum has been tortured enough.  He’s no longer a good candidate for release back into the wild, but he should be retired to an ocean sea pen near his family pod, to live out his life and stop having to perform tricks.   The only reason to breed more orcas is to make sure more captive orcas are available to do meaningless tricks for the tourists to line the pockets of SeaWorld.

Incredibly, there is no record of an orca ever harming a human in the wild.  How ironic that SeaWorld, Miami Seaquarium and the many other dolphin abusement park industries refer to them only as “killer whales”.  Marine mammal scientists and others who know and understand these free-ranging social animals refer to them as orcas.

There are many well-documented incidents of “killer whales” attacking, injuring and killing humans in captivity (and there are sadly likely to be more), but not in the wild.

I think it is because they become psychotic in captivity.  “Habitat dictates behavior” – that’s a given in science.  And the habitat of these giants, even in the best of the sea parks, is horribly constricted and boring beyond words for a highly intelligent animal.

I trained the very first orca in captivity in the eastern United States.  That was way back in 1968.  Hugo was his name.  The young orca was violently captured in Vaughn Bay near Puget Sound, WA.  Hugo would smash his head against the tank at the Miami Seaquarium where I was training him to become a circus clown.  He died in his sub-standard tank of an aneurism.   Did his new concrete habitat cause him to become psychotic and suicidal?  I think so.  Why else would he continually crash his head into the walls of the tiny concrete tank?

I realized back then that orcas do not belong in captivity.  It was so obvious.  That was a long time ago.

Seeing this global debate on captive orcas, spurred by Blackfish, happening in theaters, CNN, online, and in newspapers around the world is very special for me, probably more than anyone on the planet.  This is because I’m seeing many very brave young trainers do what I did back in 1970:  They are quitting the dolphin and orca captivity business and speaking out against it.  You will hear several of them in the filmBlackfish explain what life is really like behind the scenes at SeaWorld and other facilities.

These former trainers are under a great deal of pressure from SeaWorld.  Many will face litigation, as likely will Blackfish.  They are to be commended and supported in every way possible.

My voice for captive dolphins and orcas has been blowing in the wind for 43 years, too often falling on deaf ears.  Finally I feel I’m not alone anymore.  I can’t describe the feeling of joy this brings me.  In a word: Vindication!  Not to mention hope for the orcas and dolphins in captivity and the many in the wild who face the prospect of being ripped from their families to be put in small tanks for the rest of their lives.

At least 49 orcas have died at SeaWorld parks since I first met Hugo.  How many more have to die before the government outlaws this failed experiment?

And how many more killer whale trainers will be injured or killed before the public stops buying tickets for killer whale shows?
What You Can Do:

Be sure to go and see the documentary Blackfish which is being shown on CNN and will be out on DVD on November 24th.