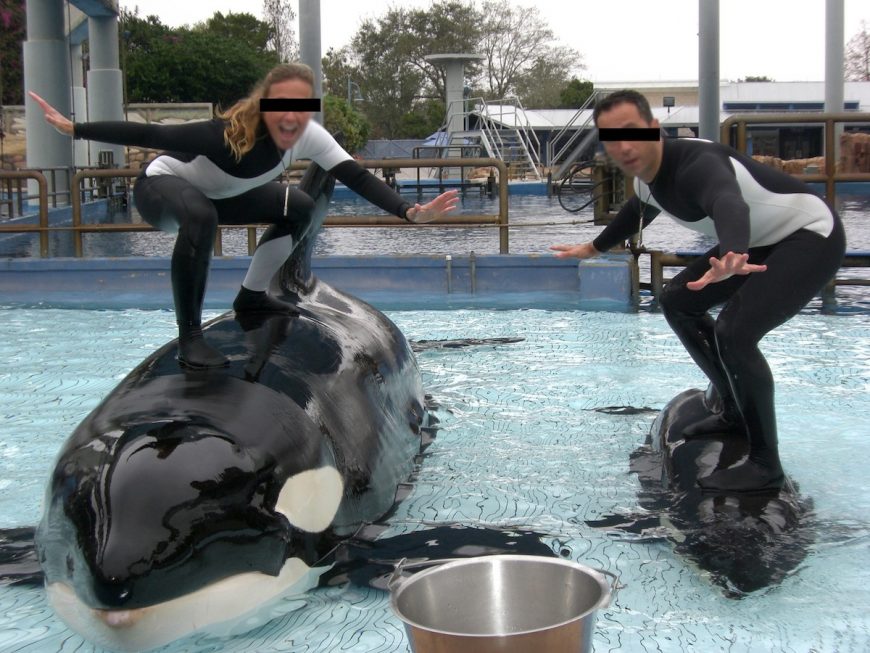 Two orcas are beached on a concrete platform. Their trainers have given them the command to beach themselves, even though this is not a natural behavior for orcas, unless they are hunting for seals or sea lions. And even then, it is only seen in an extremely limited number of populations. Beaching like this is one of the many abnormal tricks that SeaWorld employees have trained orcas to do in front of cheering audiences at its killer whale stadiums. One of the pictured orcas is reportedly Taima who died in 2010 from complications while giving birth to her fourth offspring. A female trainer, wearing a black and white wetsuit and grinning widely, is standing on top of Taima, pretending to be riding her in the exact same way one would ride a surfboard in the ocean. The other orca is Taima’s daughter Malia, who was just a year and a half old—still a baby—when the image was taken at SeaWorld’s amusement park in Orlando, Florida. Another SeaWorld trainer is standing on top of Malia, positioned on Malia’s spine and neck. Part of Malia’s head is submerged underwater. So, while gravity is pulling on Malia’s inner organs and skeleton, she carries the weight of her male trainer, who is wearing a “Look at me, I’m riding an orca, and it’s so much fun!” expression on his face.

The image of SeaWorld trainers using beached orcas as living surfboards is one of several taken by an anonymous whistle-blower at SeaWorld and sent to the Facebook group Boycott SeaWorld! A total of 13 images show the appalling treatment SeaWorld’s orcas and other animals have had to endure. Among the examples of animal cruelty depicted is the use of medication as a way of managing stress and aggression. SeaWorld’s captive orcas have a habit of regurgitation in reaction to the monotony and boredom of confinement. Rake marks and even a broken jaw have resulted from the trapped orcas’ aggression toward one another.

Several images and video clips exist online of SeaWorld trainers riding on the backs of orcas or standing on their rostrums during theatrical shows. Using orcas and other dolphins as props to attract crowds of paying spectators illustrates a complete lack of respect for these highly complex and sentient beings. Going one step further and turning their powerless predicament into a “fun” photo-op by standing on them while they are helplessly beached on the concrete floor is simply outrageous.

SeaWorld trainers no longer perform in-water stunts during killer whale shows, not because the company finally realized the obscenity of humans taking thrill rides on orcas, but because the company in 2012 was ordered to get its orca trainers out of the water. That order came two years after Tilikum, who was captured in Iceland at the age of two, reacted to nearly three decades of confinement under severely constrained and oppressive living conditions and killed his trainer. Authorities upheld the 2012 ruling in 2014, and SeaWorld had to change the content of its shows. There is no doubt in my mind, however, that SeaWorld, if it could get away with it, would still be exploiting orcas in stunts based on them posing as ride-on toys.

SeaWorld has not changed. The public’s attitude, however, has changed, and it changed despite SeaWorld’s repeated attempts at convincing us that orcas thrive in tanks and perform because they enjoy it. “Killer whales are the perfect ambassadors for the ocean,” SeaWorld declares on its website. SeaWorld has used that grandiose statement for decades as part of a corporate marketing strategy aimed at justifying the violent capture, confinement and captive breeding of orcas. But many people are finally realizing the lie.

The image of Taima and her young calf, defencelessly aground on the concrete floor and each carrying the weight of a laughing SeaWorld trainer, says it all. The lifelong incarceration of these free-ranging and immensely intelligent marine mammals has nothing whatsoever to do with teaching respect for nature or encouraging animal welfare. It has all to do with celebrating human sovereignty over nature and taking control over one of the most formidable and magnificent beings that has ever lived.