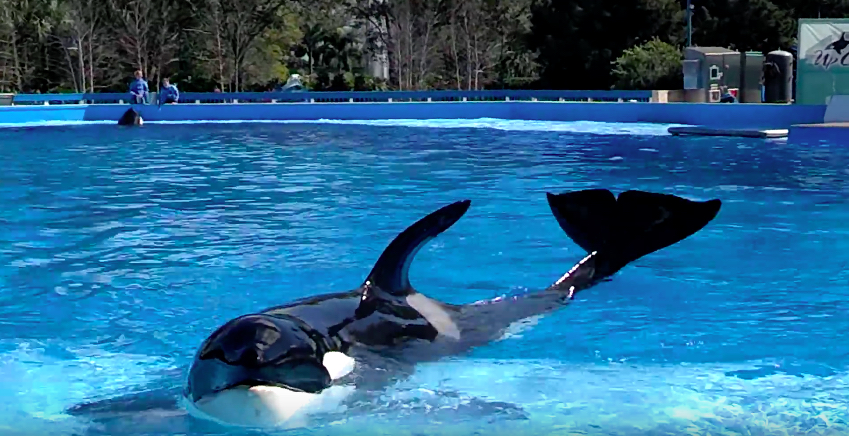 February 25, 2016 – SeaWorld Entertainment, Inc. (SEAS) released its financial results for the fourth quarter and full year of 2015, reporting a net loss of $11 million and an adjusted net loss of $9.6 million in the 4th quarter. For the full year 2015, generated revenues were reported at $1.37 billion, a decrease of $6.8 million. SeaWorld’s revenues missed Wall Street expectations, with a reported loss of 13 cents a share. Adjusted losses averaged 11 cents per share.

The message is clear: the public has said NO to the dolphin show. If SeaWorld wants to remain viable as an entertainment corporation, they need to modernize their business practices, utilizing revolutionary technologies such as virtual reality, which truly allows one to get “up close and personal” with these remarkable mammals.” ~ Ric O’Barry

In another bombshell, SeaWorld Chief Executive Officer Joel Manby publicly stated that company employees posed as animal rights activists in attempts to garnish information. Continuing, he said that the company’s board of directors has “…”directed management to end the practice in which certain employees posed as animal rights activists.”*
* Source: SeaWorld conference call, 2/25/16

SeaWorld has acknowledged “brand challenges” as a result of the 2013 documentary ‘Blackfish,’ which illustrates the tragic plight of captive orcas. In its latest attempt to overcome the “Blackfish effect,” the company has recently announced a change in management as well as new directions on future projects. Yet, while SeaWorld plans to phase out the “theatrical killer whale show” at their San Diego park in 2016, orcas will remain captive, despite public condemnation.

The solution might seem simple but it’s in line with SeaWorld’s own stated pricing principles. When captive dolphin displays are no longer a profitable business model, the industry will be forced to change. Plus, with emerging technologies such as Dolphin Project’s and Ryot’s Virtual Reality Wild Dolphin Immersive Experience where one can “virtually” swim with dolphins from the comfort of home, live animals no longer need to be sacrificed in the name of profit.

Don’t Buy A Ticket to a Dolphin Show