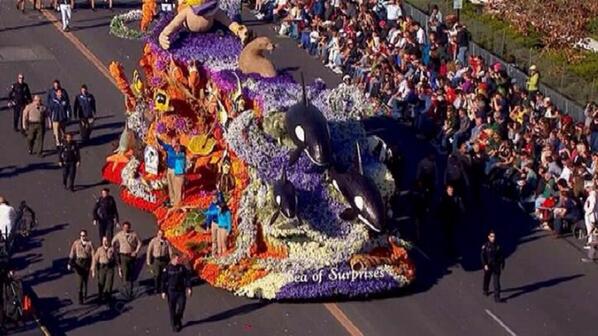 If orcas and other dolphins were able to swim down the streets of Manhattan, you can be sure they wouldn’t be celebrating their incarceration at SeaWorld, or at any theme park. Still under fire from activists worldwide, SeaWorld plans to have a float – “Waves of Conservation” – in this year’s Macy’s Day Parade, being held in New York City. Last year, activists petitioned to have SeaWorld removed from the parade altogether. While SeaWorld prevailed, protestors, led by 12 year-old Rose McCoy, jumped the barricades and disrupted the float, one which required a police escort!

A bad sign when riot police protect a corporation with a track history of polluting Mission Bay & killing #Blackfish pic.twitter.com/mjpTgDfqsD

This year Macy’s is again touting “WAVES OF CONSERVATION,” SEAWORLD®.

From sea turtles, penguins and angel fish to sharks and breaching whales, amazing oceanic sculptures abound in a stunning undersea landscape. Marking 50 years of entertaining, educating and inspiring millions of guests to help conserve ocean life, the float is a vibrant depiction of aquatic marvels.

Float Facts: Sculpted out of foam but as lifelike as the original, rolling ocean waves, the gentle movement of swaying kelp and bright tropical fish take spectators on an extraordinary undersea journey.
Performance by: SeaWorld Animal Ambassadors “

There is nothing educational about keeping dolphins imprisoned in concrete tanks, cut-off from fresh air, sunlight, natural rhythms of the sea, normal socialization and the complete sensory experience living in the wild provides. Nothing. There are no “waves of conservation” gained by creating fictitious sets where dolphins are mere props to be made fun of, or gawked at. None. You are told dolphins swim 50-100 miles in the open ocean yet you see animals swimming in endless circles. You are told dolphins will use sonar, or echolocation to hunt their prey yet you see animals being fed dead fish, often stuffed with antibiotics and other medications.

Simply put, this IS brainwashing for dollars.

SeaWorld has no place in a family-friendly traditional event such as the Macy’s Thanksgiving Day Parade.

If You’re In New York, Consider Bringing A Banner to the Parade In Support Of Dolphin Freedom.

Take Other Actions Below