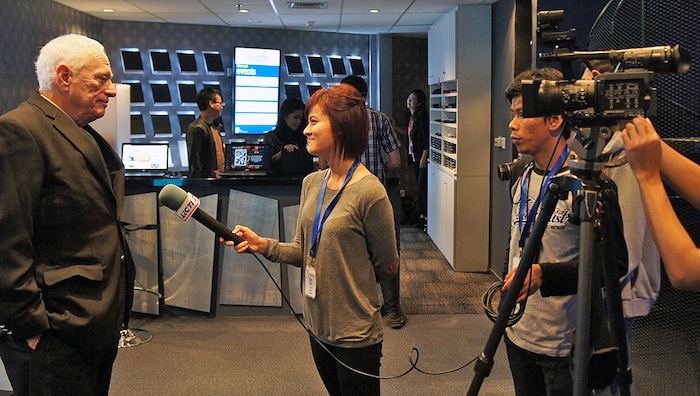 I’ve been speaking out for dolphins for forty years, but this is the first time I’ve ever had to wear a bulletproof vest!

But things are hot in Indonesia, and not just the climate.  We’ve been working for more than two years with our partners, Jakarta Animal Aid Network (JAAN), to free dozens of dolphins whom are illegally being held in captivity, caught from the wild in Karimun Jawa national park.

We signed an MOU with the Indonesian Forestry Ministry to allow us to confiscate these dolphins and move them to a sea pen we built in Karimun Jawa to rehabilitate and release them back into the wild.  One of the most egregious dolphinariums has a traveling circus where a small dolphin tank is trucked around Indonesian towns, featuring the dolphin jumping through a flaming hoop!

But when push came to shove, the MOU has been a victim of intransigence.  Our rehab facility lies empty.  We have sent letters and held numerous meeting with underlings in the Forestry Ministry, to no avail.

So it was with great hope that I agreed to attend a reception on Monday evening at the US Embassy, hosted by US Ambassador Scott Marciel, to discuss dolphin protection in Indonesia.  More than 350 people showed up, including media and many school children, and many had to be turned away at the door.  And I was seated right next to the Minister of Forestry himself, Dr. M. E. Zulkifli Hasan.

Ric O’Barry and friends at the US Embassy in Indonesia.  Note the bulletproof vest Ric is wearing.

What blew me away was that Minister Hasan got up and spoke first, stating publicly, for all the media that were there, that transporting dolphins around for a circus in Indonesia was illegal, and thanking NGOs like Dolphin Project and JAAN for helping the Ministry deal with the many wildlife issues confronting the nation.

It was my turn, and I took full advantage of the moment.  I first apologized for wearing a bulletproof vest and took it off.  I fortunately did not have to explain to the media why I was wearing it, because outside the Embassy a group of a dozen black-clad thugs were heckling people going into the meeting.  We believe they had been hired by the captivity industry for one reason:  to intimidate us.  Indeed, the threat goes beyond just heckling and yelling – JAAN’s veterinary clinic had been broken into and trashed just a few days before, and the thugs had been visiting houses asking for Femke and Pram, JAAN’s two leaders.  We hired a bodyguard for my stint in Indonesia.

I told the crowd: “All we got was Intimidation and harassment from these circuses.  Some of them are outside this room right now!  They threatened JAAN members, even one of their mothers.”  Fortunately, the media is on the issue:  “Circus Mob Threatens Dolphin Activists” blared the headline of the next morning’s Jakarta Globe.

In my presentation, I explained to the Forestry Minister and the media that JAAN and the Dolphin Project had been in touch repeatedly with the Ministry, but had had no luck in getting the law enforced.

Ric is interviewed by Indonesian television, getting the word out all over the country about the importance of protecting dolphins.

I told the crowd that there was still time: we had a win-win solution that would give Indonesia a big boost in tourism and world esteem with our rehab project, as we had built the only permanent rehab and release facility in the world for captive dolphins.  All we need are the dolphins!

Minister Hasan told me he wanted to meet with me in his office and go with me to see the traveling circus, which he vowed to shut down.

In a word, we got the truth out, with the Minister of Forestry promising us, in front of the media, to take action against the dolphin captivity industry.

Here’s keeping our fingers crossed that the Ministry will at last take action and help us get these captive dolphins out of the inadequate tanks they are housed in and send them home to the ocean where they belong.  It is likely their family pods can be located, and the captives restored to their families.