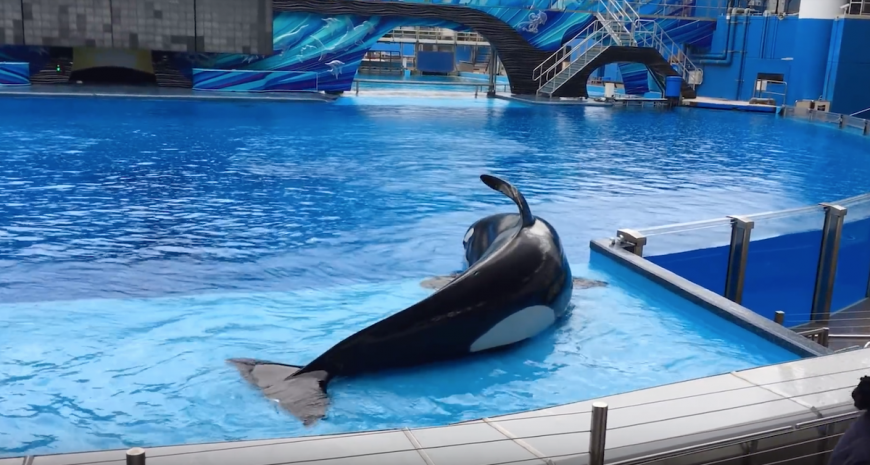 “The entire SeaWorld family is deeply saddened by the loss.”

These words are part of a statement put out by entertainment giant SeaWorld on January 28, 2019. When SeaWorld announces that it is “deeply saddened” by something, it is often because one of their orcas has died. The victim this time was Kayla. She died at SeaWorld’s theme park in Orlando. Had she lived in nature, she would have been in the prime of life: She was just 30 years old.

Born in captivity at SeaWorld San Antonio in 1988, Kayla was torn from her mother and sent to the now closed SeaWorld in Ohio when she was just two and a half years old. She was later sent back to San Antonio before being relocated in 2006 to Orlando, where she remained until her death.

Kayla was the result of SeaWorld’s captive orca breeding program. Her mother was Kenau, who was yanked from her mother’s side off the coast of Iceland. According to an online source, she was two years old at the time of capture. Kenau died when she was about 17 years old, at SeaWorld Orlando. According to the necropsy report, Kenau was carrying a still living 12-month-old male fetus when she died. Kayla’s father, Orky 2, was captured in Canada when he was about six. He, too, is now dead.

While at San Antonio, Kayla was artificially inseminated and had a calf, whom SeaWorld named Hylan, in 2005. But she had lived without her own mother’s guidance and protection for so long, she never learned how to care for an offspring. Hylan had to be hand-raised and died in 2008, before her third birthday. 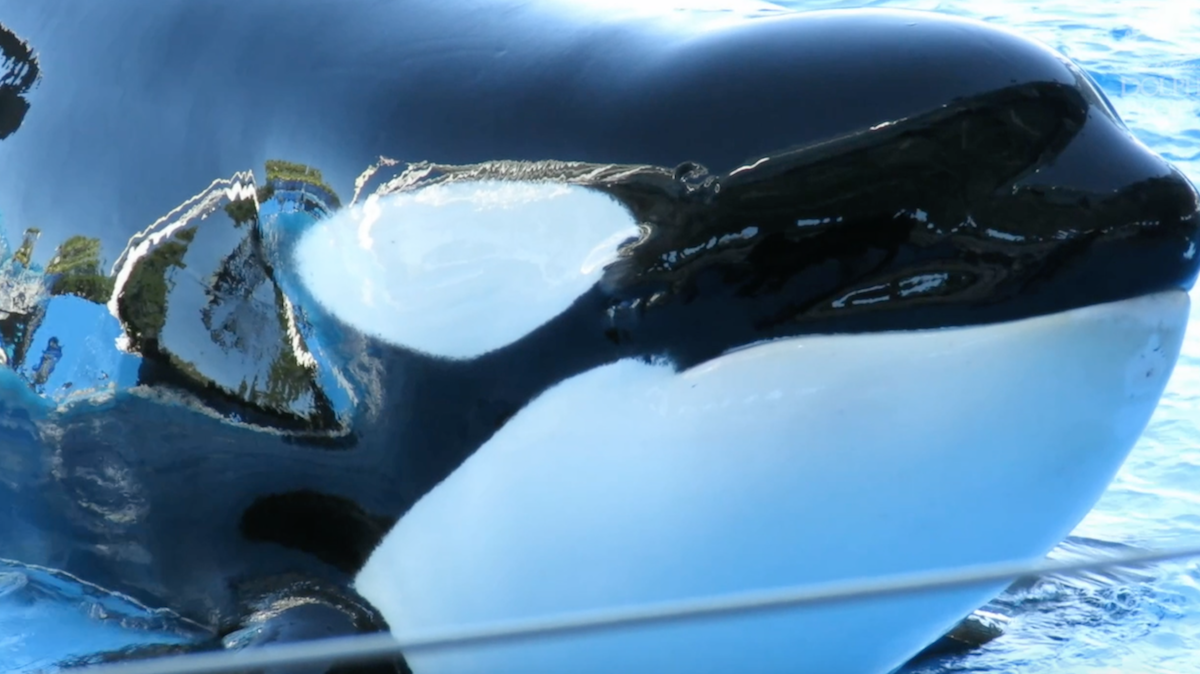 Kayla is the forth orca to die at SeaWorld in little over two years. The others are Tilikum, Kyara, and Kasatka.

Tilikum was captured off the coast of Iceland when he was two years old. When he died at SeaWorld Orlando a little over two years ago, SeaWorld stated: “The SeaWorld family is deeply saddened to announce that one of its most well-known orcas, Tilikum, has passed away.” The company continued: “Tilikum had, and will continue to have, a special place in the hearts of the SeaWorld family, as well as the millions of people all over the world that he inspired.”

Kyara died at SeaWorld Antonio in July 2017. She was three months old. On Twitter, SeaWorld announced: “We are extremely saddened to announce the passing of Kyara, our newest killer whale calf.”

Kasatka, who was wrestled from her family off the coast of Iceland, was euthanized at Sea World’s San Diego park in August of 2017. In a press release, SeaWorld said: “We are saddened to share the passing of Kasatka.” They added: “All of us at SeaWorld are deeply saddened by this loss, but thankful for the joy she has brought us and more than 125 million park guests.”

One of SeaWorld’s favorite words seems to be “saddened.” For example, when Sumar died at the age of 12 in 2010, this was SeaWorld’s announcement to the media and the public: “The entire SeaWorld team is deeply saddened by the loss.” Taima died from complications while giving birth that same year, and SeaWorld said: “We are very saddened by this loss.” When Unna died in 2015, SeaWorld posted on its website: “We are saddened to share the passing of Unna today.”(At least they are varying the degree to which they are saddened.)

The list goes on and on. According to the website Seaworldofhurt.com, Kayla was the 42nd orca to die at SeaWorld since the entertainment giant put its first wild-caught orca on public display in 1965. This number does not include stillbirths or miscarriages; nor does it include the death of Kenau’s 12-month-old male fetus.

Born within the walls of an amusement park, Kayla’s life was a far cry from the life that orcas are meant to live. In nature these free-ranging and highly social marine mammals swim up to a hundred miles per day. For 30 years, though, Kayla was able to swim only a few feet before a concrete wall stopped her. Just like her wild-caught parents, she was incorporated into the company’s marine mammal training program, which transforms these independent top predators of the sea into performing pets dependent on their human keepers for food and attention. Over the years, SeaWorld has repeatedly claimed that captive orcas are “ambassadors of the sea” whose role is to “inspire millions.” But how are spectators supposed to learn anything about the true nature of orcas by looking at SeaWorld’s performing orcas that were violently captured from the wild or were born inside a tank and have never seen the ocean? 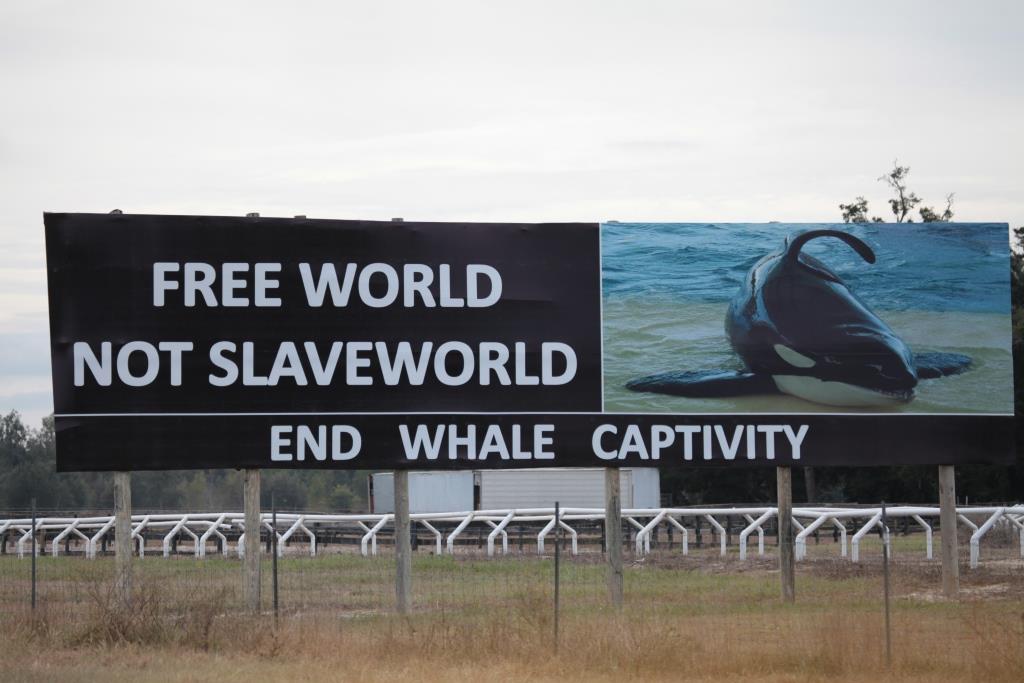 Today, 20 surviving orcas remain at SeaWorld’s three amusement parks. As they die, the world will immediately be kept abreast of SeaWorld’s devastation. It’s predictable. SeaWorld will also mention how the deceased orcas inspired those who watched them perform, just like it did with Kayla: “While today is a difficult day for all of us at SeaWorld, Kayla inspired generations of guests and employees to care and learn more about this amazing species.”

SeaWorld’s reaction to Kayla’s death pays no attention to the agony she experienced during her three decades of incarceration. There is no mention of her calf, whom she did not know how to care for, and who died far too young. There is no mention of the miscarriage that she suffered in 2007, whereby she lost her male calf. SeaWorld’s statement focuses solely on SeaWorld. But rather than feeling sorry for itself, SeaWorld should be saddened at how it has treated Kayla and its other captive orcas.

In 2016 SeaWorld finally put a stop to its captive orca breeding programs, but that does not help the ones who continue to languish in SeaWorld’s stadiums. As they die, SeaWorld will tap into its prefabricated announcements. There will be no mention of the sacrifices captive orcas are forced to make in the name of superficial entertainment. Nor is it likely that SeaWorld will ever feel compelled to acknowledge the many losses that each of them endured in the hands of humans.