Sad News, But Signs of Hope

Home/Blog/Japan/Sad News, But Signs of Hope 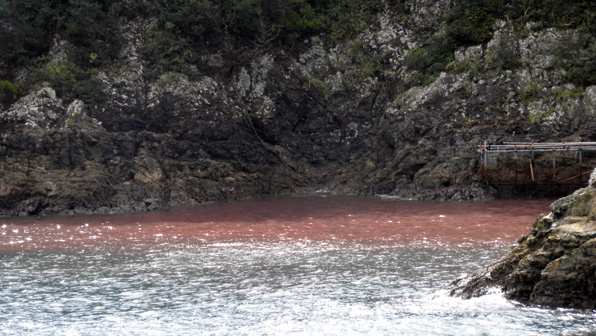 I just heard from our Japanese volunteer Sakura in Taiji that another 30-40 pilot whales were brutally slain in the Cove yesterday.  A large pod had been driven into the Cove a few days ago, and many are still in the Cove, waiting their turn to die.  Altogether, Sakura reports, the number of pilot whales killed was devastating.  Today (Sunday), the dolphin hunters apparently took the day off, and the pilot whales remain in the Cove, four days without any food or succor.

UPDATE: Sakura tells me that the dolphin killers did not come around on Sunday, and on Monday only about ten pilot whales were removed from the large pod in the Cove for slaughter, probably because there is not enough storage space or buyers for the pilot whale meat.  A small pod of bottlenose dolphins are also being kept in the Cove.  Some animals died and were hauled off to the butcher factory next to the Fishermen’s Union.

“I’m so sad,” she tells me.  Sakura went to the butcher factory in town next to the Fishermen’s Union yesterday, and reports “There are so many buyers for pilot whale meat!”  She’s also checking shops in town to see if it shows up on shelves.

Sakura was one of eight Japanese nationals who joined us at the Cove this year on Sept. 1st, talking to the media in Japanese and being with their many new friends from Hong Kong, the US, South Africa, Brazil, the Philippines, Canada, Australia, and Bolivia.  They were a great group of supporters!

She has also become our first Cove Monitor from Japan.  We are so proud of her!  Having grown up in Japan, her command of the language will be very helpful to us in keeping track of things in Taiji and seeking out new friends and contacts there.

Two Japanese friends from our group will join her in a few days.

Sakura at the Cove on Sept. 1st with Ric’s Save Japan Dolphins nobori banner; in the background, two boats of Japanese Coast Guard stand watch.

I have always said that it will be the Japanese people who end the dolphin hunts, not us Westerners.  We are already seeing many Japanese voting with their pocketbooks – they are refusing to buy dolphin and whale meat contaminated with mercury, and as a result, fewer dolphins are being killed in Taiji over the past four years.

With Sakura and her friends helping us in Japan, I know the hunts will end soon!

For updates from our Cove Monitors in Taiji, #Tweet4dolphins.