Rizzo’s Dolphins Die in the Cove

Home/Blog/Japan/Rizzo’s Dolphins Die in the Cove 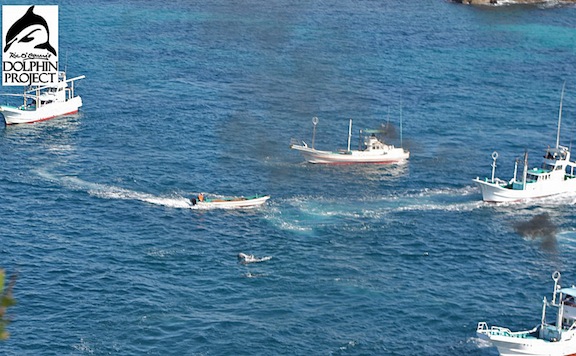 I arrived back in Japan to monitor for the Dolphin Project a few days ago and was nervous to be coming back to see the violence of the killings and capturing of dolphins, but excited to be working with Sakura, the amazing Japanese Cove Monitor here.

I arrived with Johanna, my friend and fellow Cove Monitor who I have worked with here before several times, and we are making a great team here.  After a couple of days of no violence in the Cove due to a mixture of bad weather and the hunters not going out, yesterday I woke up feeling very uneasy looking at the weather and the winds.  I also knew that the hunters would be eager to find a pod as they had not had any luck for a few days.  Sadly I was right, and I witnessed another day of carnage and suffering here in Taiji.

Around 9AM, three hours after the boats went out, we spotted the banger boats in drive formation – the sickly sight that I have seen so many times for the past three years of coming to this place.  In an instant my stomach was in knots, as we moved position to the lookout point directly over the Cove, and I could see the dolphins being driven in closer, but not clear about what species they were.  These dolphins gave the hunters a good chase, and as I was updating social media, my hands were shaking as I was trying to type, letting the world know what was going on, and my stomach churning with fear.  You can never get used to seeing what goes on here.  Ever.

Soon enough, the dolphins were at the point where there is no return close to the harbor, and I was preparing myself for witnessing yet another slaughter and possible captives to be taken away from their families.

We could see they were beautiful Risso’s dolphins, around nine with juveniles swimming close to their mothers, and desperately trying to get away from the boats, which were pushing and bullying them towards the Cove.

I know at this point there would be no escape for the dolphins – they have to face the evil Cove.  I had a feeling of helplessness and was just going through the motions, knowing what is going to happen to them.

Soon enough the nets were strung, and the Risso’s were all in the Cove.  The tarps were already up (which are simply there to block our views and our cameras), and we witnessed dolphins fighting not to go under them.  A dolphin got stuck in the net, one of the most upsetting things to see, and one dolphin also crashed itself up against the rocks desperate not to be pushed under the tarps to slaughter.

A Rizzo’s dolphin and her calf are caught in the Cove in Taiji.  Photo by Johanne Aa Rosvoli.

The slaughter began, and a skiff boat emerged from under the tarps with additional tarps hiding whatever was underneath them.  The skiff boat went back out to sea, and soon enough I realized it was taking the juveniles back out to the sea to be dumped – a scene that I saw quite a few times last year when I was here.  I cannot confirm if they dump the juveniles out there after killing them, or if they dump them out there alive.  But I do know that the chances of them making it alive without their pod are slim.

No captives were selected for captivity this time.  But in my view they are better off going under the tarps and slaughtered then put in a tiny pen only to entertain in pain for humans and be slaves for the rest of their lives.  But that is only my opinion.

Taiji banger boats and a skiff circle around a pod of Risso’s dolphins.  Photo by Tia Butt.

It was an emotionally draining day for all, but as I always say, the dolphins suffer so much more, we are here to tell the story, and be their voice.  No slaughter is the same; all these animals have a family.  A pod, which they are all close with, these families are ripped apart, and we must carry on being their voice until this ends.

The good thing is that every year I have been coming here the killing numbers are declining, as the Japanese people don’t want to eat toxic dolphin meat!

I usually volunteer here every year for a month or so, but can only be here for a couple of weeks this time due to my own work, but I am so glad I managed to volunteer again this year.  I am very proud to be a Cove monitor for Ric O’Barry and Dolphin Project, and I am hoping to be able to post and update only good news for the rest of my time here (no slaughter today, as the dolphin hunters went out but came back with nothing).

I am updating the Dolphin Project Facebook page and Twitter daily so look for the updates, and let’s hope it’s only good news!