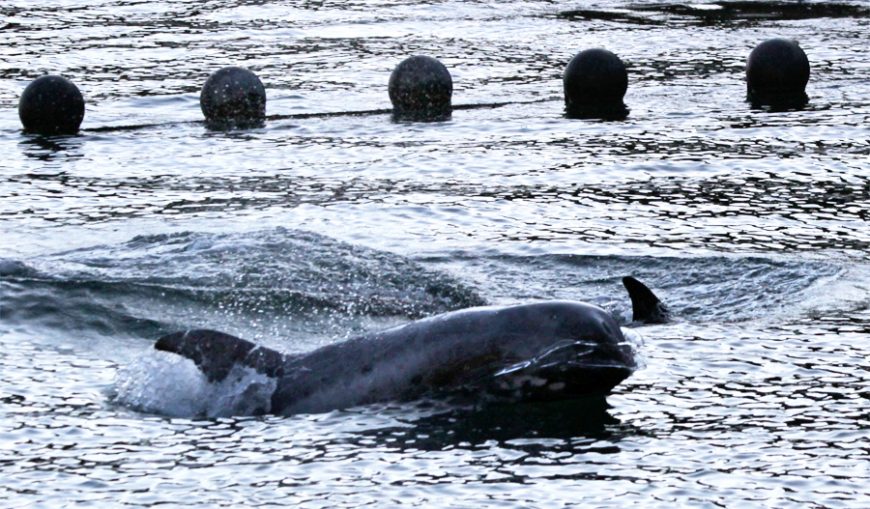 December 18, 2015, Taiji, Japan: After 16 days of dolphins being able to swim free and safe past the infamous cove, the tide turned.

A couple of hours into the hunt, a pod of approximately 8-10 Risso’s dolphins migrating offshore were spotted. For the next five hours, they were chased, harassed, terrified, bullied and ultimately driven into the cove where they were slaughtered. Their bodies, hidden under tarps were taken away, a so-called “traditional” practice that appears to operate in shame. This marks my 12th visit to Japan, witnessing too many slaughters to mention by incident and date. Even so, today’s kill of Risso’s was one of the tougher slaughters I have documented. It was no more gruesome or bloody, but nonetheless, a very, difficult one to watch.” ~ Tim Burns, Dolphin Project Cove Boss and Monitor

Back in 2010, I witnessed a large slaughter of Risso’s with friend and fellow cove monitor Hans Peter, from Switzerland. That night he asked me to remind him about a story he wanted to share with me. It would be many months before I did remind him, but one evening, via SKYPE, Hans told me the story of Pelorus Jack. Pelorus Jack was a Risso’s dolphin who lived in the waters of Cook Strait, New Zealand – marking a very, rare sight in the area. He was famous the world over for guiding ships through the rough waters of French Pass, with ships following him as he swam just past their bows. From 1888 until 1912, ships would look to him to provide safe passage through these rough and often foggy waters.

In September of that same year, Pelorus Jack became the first sea animal to ever be protected by law. Eight years later, 1912, he disappeared.

While no one knew for certain what had transpired, no one will ever forget all that he did. Some speculate he may have been harpooned. Others believe he died of old age. In places such as New Zealand, Pelorus Jack will always be remembered, and will continue to be the source of many fond stories. People traveled from all over just to catch a glimpse of him. Fast forward to September 2015, when the first slaughter of the season took place in Taiji. The species was none other than Risso’s dolphins. Unlike any, other time, some of the Risso’s broke through the nets in the killing cove, and ended up at the feet of Dolphin Project Founder/Director, Ric O’Barry. Ric and I shared about a three-second look while we were in the middle of live streaming, but honestly it felt like several, long minutes. Our unspoken words involved us trying to decide which one of us was going to be imprisoned in Japan for jumping into the water and pushing this cut up and suffering Risso’s off the rocks. Micro-seconds before we both started to move, one of the hunter’s skiffs raced in, with divers jumping into the water. Ric began yelling at them to hurry up and get the animal off the rocks. *

*View the raw footage of our Live Stream from that fateful day below.

I’ll never forget how close I came to possibly spending years in a Japanese prison. Today, I couldn’t help thinking about Pelorus Jack and of the brutal slaughter of Risso’s this past September. Perhaps this is why today’s events were particularly difficult to document.

This isn’t tradition – it is the greed of a few men. Cultural traditions wouldn’t involve the police, Coast Guard, politicians, news media, and a hidden killing cove in the back of a national park covered in tarps and fences with security cameras. It wouldn’t involve dragging dead Risso’s under tarps into roped-off buildings, surrounded by security. No other fishery in Taiji operates this way. In my family, traditions are sacred, something we are proud of, and nothing we hide from or draw from immense resources to do. We take pictures of our traditions and willfully share then with family and friends. In other words, we are proud of our actions and know we are creating memories that can be cherished years from now.

As you are reading this blog, I hope you want to be a part of our collective Dolphin Project family. Wondering what you can do to end this madness?

Take the pledge to not buy a ticket to a dolphin show.

The captive industry fuels the slaughter of nearly 1000 dolphins a year right here in Taiji, Japan. You can help us by taking that first step. I did it nearly 6 years ago, and I’ve never looked back since!