Risso’s Dolphins: One of Taiji’s Many Commodities On January 20, Taiji’s dolphin hunters located a group of 16 Risso’s dolphins shortly after departing the harbor. And, just over an hour later, they had already driven the pod close to the Cove. 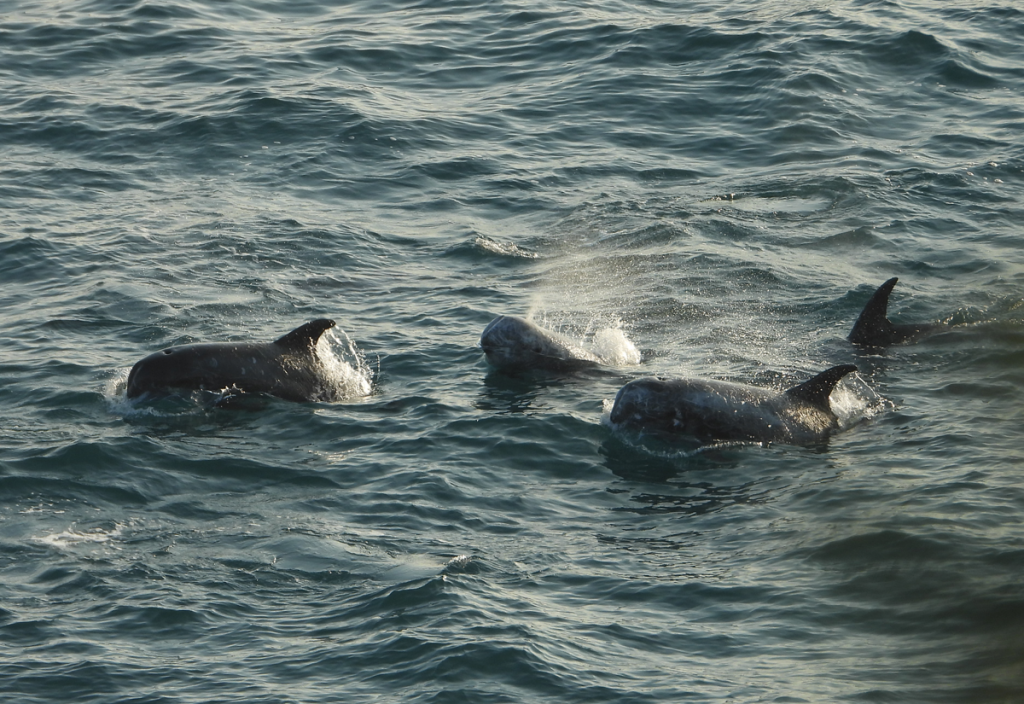 Risso’s dolphins swim for their lives in the early morning light. | Credit: DolphinProject.com

Within this group, there was one very young calf that swam close to its mother. There were also many other young individuals, identified by their dark grey body color. Due to depigmentation that is unique to this species, Risso’s grow lighter in color as they age and gather scars from hunting squid and socializing with one another.

After being harassed, chased and netted in the Cove, the dolphins were left for several minutes. They swam extremely close together, at times stopping and rubbing against each other, as if in effort to comfort. Although I have seen Risso’s dolphins many times in the wild, I have never seen this type of behavior before. Risso’s dolphins appear to comfort each other in their final moments together. | Credit: DolphinProject.com

Soon after, dolphin trainers arrived. As the captive selection process commenced, the hunters used skiffs to further drive the dolphins into the shallows so that divers could grab individual dolphins for the trainers to inspect. The dolphins panicked, and a few of them got caught in the nets. 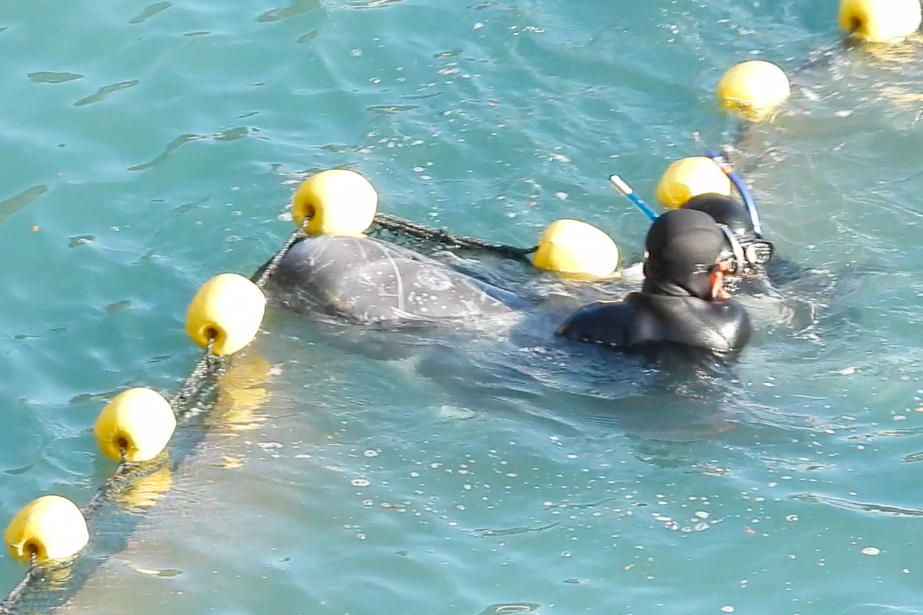 A panicked Risso’s dolphin gets caught in the hunters’ nets | Credit: DolphinProject.com

Eventually all of them were dragged onto the beach. Two juveniles were put into slings aboard a skiff with hunters. The skiff lingered in the Cove for several minutes, and then, with the dolphins still in slings, drove the remaining pod members under the tarps. Eventually trainers got on board this skiff and carried the captives away to sea pens in Moriura bay. A young Risso’s dolphin is put in a sling to be taken captive. | Credit: DolphinProject.com

The rest of the pod was relentlessly slaughtered. The thrashing was audible as the hunters delivered a painful and less-than-instant death to each individual. For a self-aware, sentient and intelligent marine mammal to watch members of its pod die right next to them, the cruelty is immeasurable. The bodies of slaughtered Risso’s, including a very young individual, are visible as they are taken to the harbor. | Credit: DolphinProject.com

The following day on January 21, the hunters found another pod of Risso’s dolphins. This time, they came from very far offshore in a drawn-out drive. By the time they reached the Cove, the dolphins had been chased for miles. This pod was made up of older individuals, many with layers of white scars. 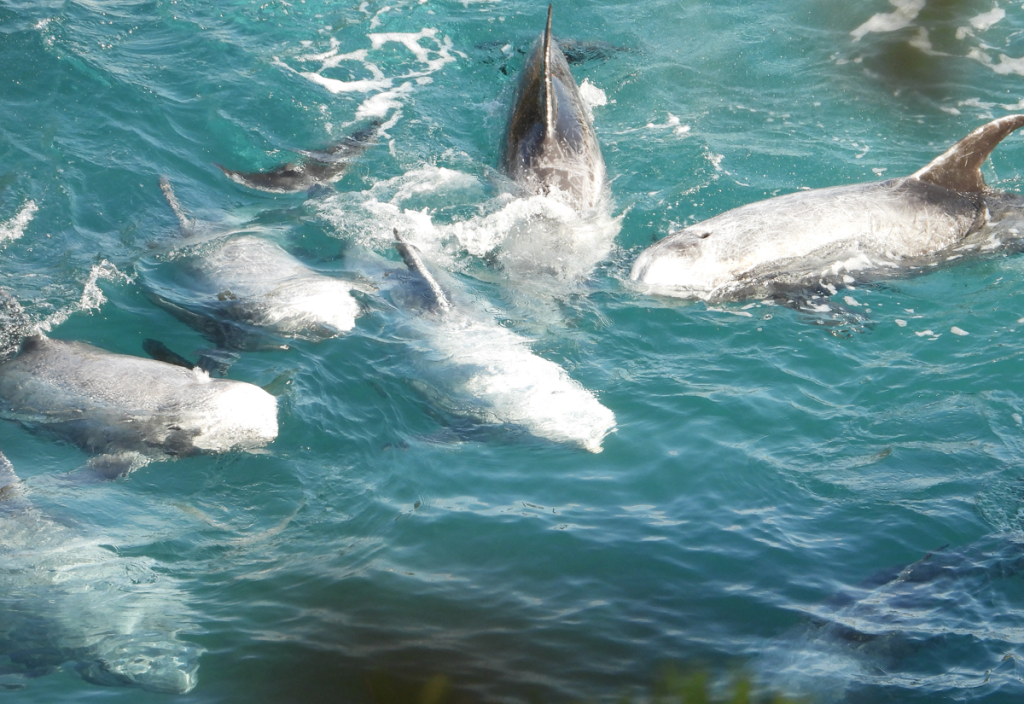 Several adult Risso’s dolphins swim closely together as they are driven in to the Cove. | Credit: DolphinProjetc.com

Almost immediately after trapping the pod in the Cove the hunters pushed them onto the beach, but two dolphins resisted. The hunters aggressively chased after them on skiffs, using the noise of their engines. A few times the dolphins seemed in danger of being run over. The two persisted for several minutes, looking for a way to escape. Eventually they tired from prolonged harassment and were forced under the tarps, where they and their entire family group were slaughtered. Many of the bodies of these Risso’s were visible as the hunters dragged them back to the harbor. Decades of roaming the open ocean and contributing to the marine ecosystem were extinguished in a matter of minutes. 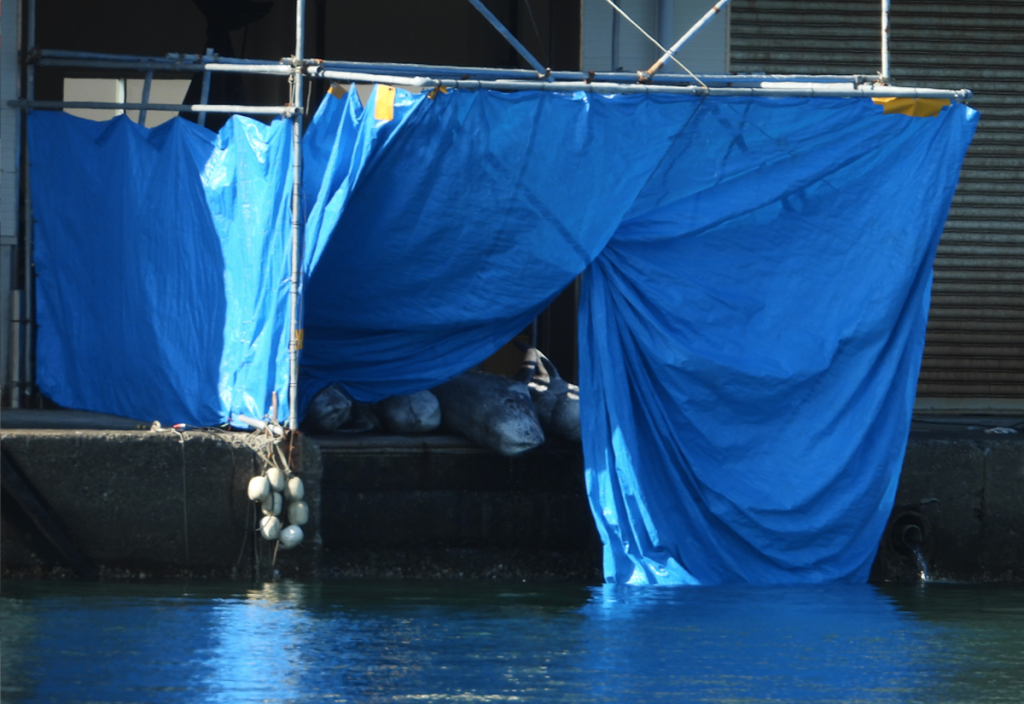 Combined with the striped dolphin slaughter on the last day of the previous week, this put us at three red cove days in a row. Thankfully, the following day the hunters were unsuccessful in bringing in a pod of dolphins. And the day after that, inclement weather kept the boats in the harbor.

On January 24, the boats got into formation a few miles from shore. Although they were not too far out, they struggled to drive the pod. Nearly three hours later, they gave up and all of the boats returned to the harbor, one after another. The following day the hunting boats departed but were ultimately unsuccessful in finding dolphins. The day after, the boats remained in the harbor because of high winds from an approaching storm, rounding out the end of the week with a streak of blue coves!

In the handful of local markets that carry cetacean products, there always seems to be an excess of meat labeled as お買得品ゴンドウくじら or bargain “gondou whale.” These could be either Risso’s dolphins, pilot whales or melon headed whales, all of which have the suffix of “gondou” in their Japanese species’ names. We are left to wonder which sentient individuals were reduced to these small packages, which customers appear to seldom purchase. Packaged dolphin meat for sale at a local market in Japan | Credit: DolphinProject.com

The money made from dead dolphins would not sustain these hunts. We must persist in continuously exposing these hunts and the money trail that leads to marine parks and aquariums that display dolphins. The captivity industry is based on the supply of captive dolphins and the demand of consumers who purchase tickets to see them. If there is no demand, there is no supply.