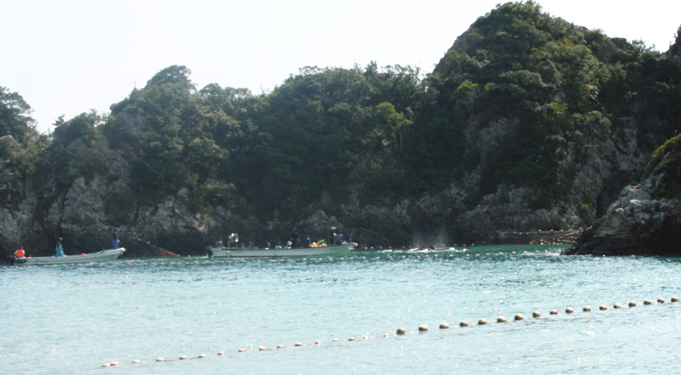 Today’s events were surreal and heartbreaking.  I have been paying close attention to every slaughter for the past 2 years.  I also watched a dolphin drive in 2010 of bottlenose dolphins, and I thought I was well prepared to endure the events that would I would soon face.  But when we drove up to Taiji harbor and saw the boats just getting ready to head out to hunt dolphins, I felt like I got kicked in the stomach and had a frog in my throat.

Nothing to do but watch and wait.  Hanging on to hope and faith that they would return empty.

The boats quickly disappeared from sight and stayed out of sight for a few hours.  Then slowly but surely they re-appeared far off in the horizon.  Closer and closer they got, and it was clear they were driving in a pod of dolphins.  Seemed like forever…every second felt like minutes.

We watched the boats fight with the clever dolphins that just refused to cooperate.  The closer they got to Taiji the more they fought.  A few times they made a dash in the opposite direction that the hunters were pushing them towards.  The boats would scramble to gain control, and I would see a little glimmer of hope.  But the reality was there was no way they were going to be able to out-swim those relentless hunters and boats.

By the time the dolphins were netted into the Cove, they completely stopped fighting and just kind of huddled together in the corner.  The boats left the Cove, and the Cove was quiet for a few minutes after the nets were put up.

I thought maybe the hunters were going to take a lunch break.  I was able to catch my breath and gather my thoughts.  I originally thought they were Pilot Whales because they looked dark with melon shaped heads.  But Hans Peter quickly pointed out that they were in fact Risso’s Dolphins. I t was really hard to get a clear visual of them because there were no good lookout spots.  I still never even got a good picture of them after reviewing all my pictures.

Within 10 minutes about 3 or 4 skiffs filled with hunters and trainers came around the corner straight into the Cove.  I saw the boats push the pod deep into the Cove where they disappeared.  They did not try and flee.  It was pretty quick.  Not too long after a skiff came out with dolphin slings on the side.

Complete silence filled the area.  I was not sure what was going on.  I felt weak in my knees, as I had to sit down and just stare into the Cove.  Just imagining what was going on around the corner to those innocent gentle dolphins.  Couldn’t help but cry quietly to myself.  Nothing I could do but sit and wait.

Felt disappointed in myself feeling so helpless.

Never get used to it.

No matter how may dolphin hunts I have witnessed by now, I never get used to it.  After a longer time span with no hunts like the last three weeks, there is always a spark of hope; there would be another blue day and another and another, until the dolphin hunters finally decide to stop the hunts for good.

This will be the case some day in the not too distant future.  I know it!  But not today.  As cove monitor Ruth describes, the heart sinks when you see the boats leave port.  And even more when you observe them line up near the horizon and then slowly but surely approach, chasing a pod of exhausted dolphins towards shore and Cove.

The dolphin hunters were desperate for a catch today, it seems.  Saturday is normally their day off.  But after three weeks, with such good weather today, they did not let up on this opportunity.  The victims are about a dozen Risso’s Dolphins.  Trainers selected 3 dolphins, 2 adults and a juvenile, and took them to the harbor for captivity.   The rest, about 10 animals, were slaughtered quickly – which does not mean their death is quick though – it’s not.  By noon it was over.

The helplessness one feels during the drive and the killing, combined with lack of sleep and the subtle hostility we face from the locals, are not exactly mood lifting.  The local government and dolphin hunters, in combination with the authorities, have become ever more elaborate in blocking us from seeing anything over the last few years. It is amazing to see the extent of energy and money they put into this.  The police and Coast Guard presence alone literally must cost millions every year to cover up a subsidized business with no future, contaminating customers with mercury laced dolphin meat.  Yes, it’s a bizarre world sometimes.

Yet hope and confidence always remain strong.   This WILL end.  We help everything we can to contribute to this together with our Japanese friends.  There is much progress already, looking at the dwindling capture numbers of dolphins here and of Dall’s porpoises up North.  We are getting there!

On the way back out of Taiji, we briefly parked in front of the small supermarket opposite the Taiji slaughterhouse.

There was an odd and intense stench in the air.   It was the smell of boiling dolphin meat from the freshly caught Risso’s, we were told.  A few hundred yards down the road there was a dolphin show going on at the same time, at the Taiji Whaling Museum.  And less then a mile further down, some trainers were teaching some “cute” tricks to captive dolphins at Dolphin Base.

It would be the best remedy for my Blues if tomorrow were the next “Blue Day”.