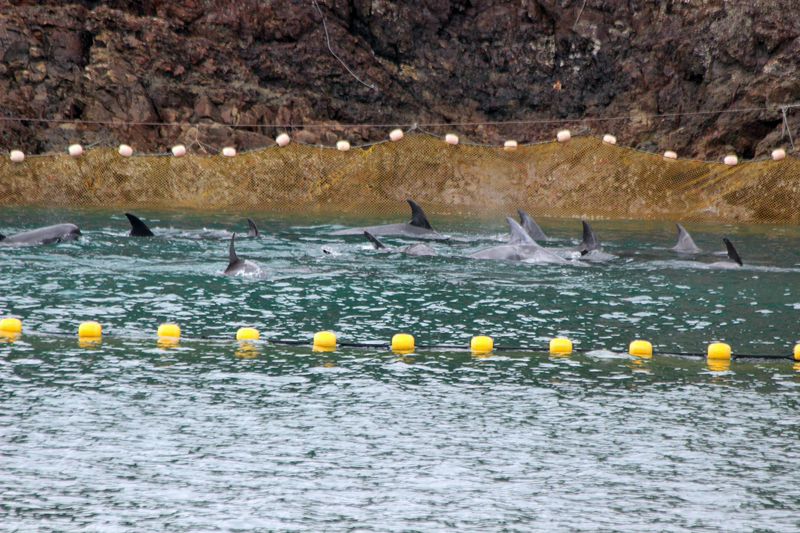 For 17 consecutive days the Cove has run blue, but that streak ended today. As the sun rose this morning, 12 dolphin hunting boats filed out of the Taiji Harbor while a pod of Risso’s dolphins swam off the coast, unaware of the danger they were in. After less than two hours, the hunters located this pod.

Five boats came together in drive formation, with the rest of the fleet hurrying to join the chase. The boats steadily drove the pod closer to shore — but as they approached the harbor, the weather turned in favor of the dolphins. Heavy rain reduced visibility, and for several minutes both the boats and the pod disappeared in the fog. Those few moments were filled with hope and impatience.

If the dolphins could disappear under the water for long enough, perhaps the rain would hide their position from the hunters and they could escape! But instead, the fog lifted, revealing the hunters driving the dolphins through an obstacle of rocks and fishing nets at the entrance of the harbor. There would be no escape today.

The pod was pushed the final distance into the Cove and a net was laid behind them. Several more nets were strung to separate the family pod, and as some were being killed in the shallows, the rest were forced to watch and wait for their turn to die. After the hunters had killed the first group, the remaining dolphins were pushed onto the beach.

Similar to the previous slaughter on October 3rd, the entire pod of Risso’s was not killed. About a dozen dolphins continued to swim in the Cove as skiffs towed the dead bodies away.

Boats continued to drive in and out until all of the bodies had been transported to the butcher house and extra nets were removed. The remaining family of Risso’s were left in the Cove for another hour, and spent that time pacing back and forth along the net, spyhopping, breaching, and thrashing just beneath the surface.

When the boats returned once more, the hunters began to remove the net and the dolphins immediately swam through the narrow exit — without any coaxing. Banger boats were driving the dolphins once again, but this time, back out to sea. After about 30 minutes, the Risso’s found their way through the obstacle course — to freedom.

The boats returned to port — another day’s work finished. They left behind a now-broken dolphin family forever affected by this unimaginable tragedy.

If they survive the trauma, they will be forced to live with the memory of today, without any understanding of why it happened.

The Dolphin Project has been on the ground in Taiji since 2003 and will continue to do so until this senseless slaughter ends.