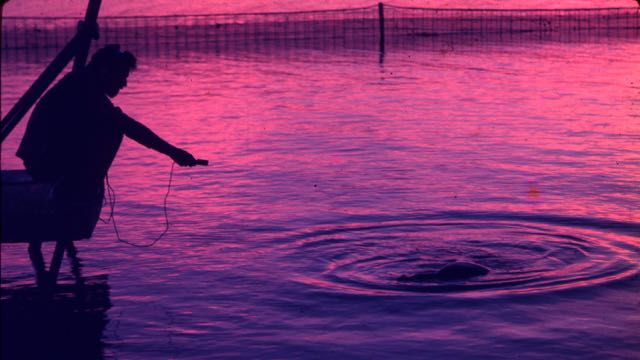 Ric O’Barry was about to experience an epiphany. Kathy, the most beloved of the dolphins that he had trained for the hit television series Flipper, had died in his arms of a broken heart. Six days later, in the spring of 1970, he was on a flight to Bimini … “as if on a pilgrimage to try to undo at least in part the mess I had made of things,” Ric wrote in Behind the Dolphin Smile. Much to the amusement of the reader, the Dolphin Project director got himself in quite a pickle during his Bimini trip. He had gone to rescue Charlie Brown, one of four dolphins he had captured seven years previously for the Bimini Lerner Marine Lab. The other dolphins were deceased now, but Charlie Brown was in Bimini, blind in one eye and very much alone.

Earth Day eve was a moonless night. Touting his green armband for Earth Day, Ric took his diving gear, a bolt cutter and a wire cutter, and rented a Boston Whaler. The plan was simple. He would cut away a section of the fence holding Charlie Brown captive, and the dolphin would swim free. At least, that was the idea. Charlie Brown had other ideas.

The dolphin was “being contrary,” Ric wrote in his book. “For at least an hour I tried to get him out of the pen. I chased him, I grabbed his flukes and tried to drag him.” Exhausted, he finally dragged the Boston Whaler into the pen with Charlie in an attempt to run the dolphin out.

“When I went left, he went right. Or down the middle or someplace.” — Ric O’Barry, Behind the Dolphin Smile.

Then the tide went out.

When Earth Day dawned, Ric was sat on the dock exhausted. People stared at him and the whaler, still stuck in the pen with Charlie Brown.

Ric spent a week in the Bimini jail as authorities determined what to charge him with. Under the stern gaze of the devout Sgt. Pepper (Ric’s nickname for his custodian), the sergeant was convinced that his prisoner could be charged with stealing a fish, a federal offense. Richard OBarry being released from the Bimini Jail 1970

Fortunately, heightened media attention coupled with the desire to keep things “low key,” settled the case into a simple charge of trespass. Ric was fined $5 and ordered to be on the outbound plane leaving at noon.

After the Bimini trial ended, O’Barry returned to his home in Coconut Grove unsure what to do next. Fred Neil, the American folk singer-songwriter of 1960s and early 70s dropped by with a friend. That friend was Stephen Stills, the American musician and multi-instrumentalist of Buffalo Springfield and of Crosby, Stills & Nash (and Young) fame. The original Dolphin Project readaption center in the Florida Keys circa 1971.

Out on a boat observing wild dolphins, Stills offered to help fund O’Barry’s research with dolphins, and the readaption program for returning dolphins to the wild. There was one stipulation.

“The only problem I have,” Stills told Ric, “is that business of yours in Bimini. If I’m in it, it’s gotta be totally within the law.”

“Bimini happened,” Ric responded, “because it had to happen. But it won’t happen again.”

With a new cause in hand, O’Barry needed t-shirts. When he went to have them created, he had no ideas for a logo.

“It’s a project of some sort?” asked the shop owner.

“What kind of project?”

“Then why don’t you call it the Dolphin Project?” Consider joining the Dolphin Project as we set off on the next 48 years.

We are completely funded by your generous support.

Consider Making a Donation to help with our ongoing campaigns.