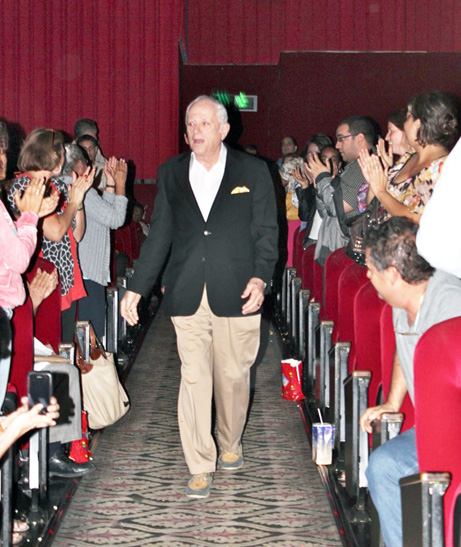 Ric O’Barry visited Puerto Rico last week, to speak to the public at a special screening of The Cove in San Juan, and to offer his support to the local activists who have been campaigning against a dolphinarium being planned for the city of San Juan.   The main local groups mounting the opposition against the project, and that hosted Ric, are Animal Concerns Puerto Rico and El Comité por Delfines Libres (The Committee for Free Dolphins).

Plans were announced earlier this year by Mr. Jorge Santini, Mayor of San Juan, to build a dolphinarium near the popular Escambron Beach in San Juan.  The Mayor said the dolphinarium would be a prime tourist attraction as well as a center offering so-called “dolphin assisted therapy” for those with disorders such as autism and Down syndrome.

On the evening of the 13th, a packed theater of interested people came to view The Cove.  I spoke to the audience before the film began, to talk about our efforts fighting the planned dolphinarium, to tell the public how they could get involved in helping to stop the dolphinarium and to contextualize the larger meaning of The Cove in terms of such efforts to keep all dolphins free from captivity.   At the end of the film, which received a standing ovation, as I understand it usually does worldwide, Ric entered the theater to thunderous applause.   Ric spoke for nearly an hour, talking about his life and work and answering many questions from the public.   Ric explained that there is no scientific evidence whatsoever supporting “dolphin assisted therapy”, and he announced that he would challenge San Juan’s Mayor Santini to a debate about the dolphinarium.

He also explained that, since Puerto Rico is a territory of the United States, the island must follow all US laws regarding the importation and care of dolphins, so it would be considerably more difficult for such a project to come into existence with the ease that it does in many foreign nations and in other islands of the Caribbean, which may have regulations that are much less strict.  He also said at one point in the evening:  “We should not educate children into the culture of dominance over animals by justifying it with centers of ‘conservation and research’. The worst illusion of nature is the presumed smile of a dolphin; it seems to be happy when in reality is suffering.”    I believe that Ric’s presence and enthusiasm may have inspired quite a few audience members to become activists on that very night.

The next day, activist Carla Cappalli escorted Ric during a long day of media interviews with local print media, television and radio networks.   The local journalists were very interested in what he had to say, and as a result, great numbers of Puerto Ricans were educated about dolphins, with information from Ric that they may not have been exposed to before, as a result of the widespread coverage in the media.

We would like to offer our gratitude to Ric O’Barry for taking the time out of a very hectic schedule of travels to come to Puerto Rico to offer his support to help keep Puerto Rico free of captive dolphins.

There is also a petition you can sign at:

http://www.delfineslibres.org/peticion/
(Click the orange button there that says “FIRMA”).

Ric O’Barry and the team here at Dolphin Project have been quite busy as of late, what with new dolphinariums and captive
read more