Ric O’Barry and the Dolphin Project Team are in Japan 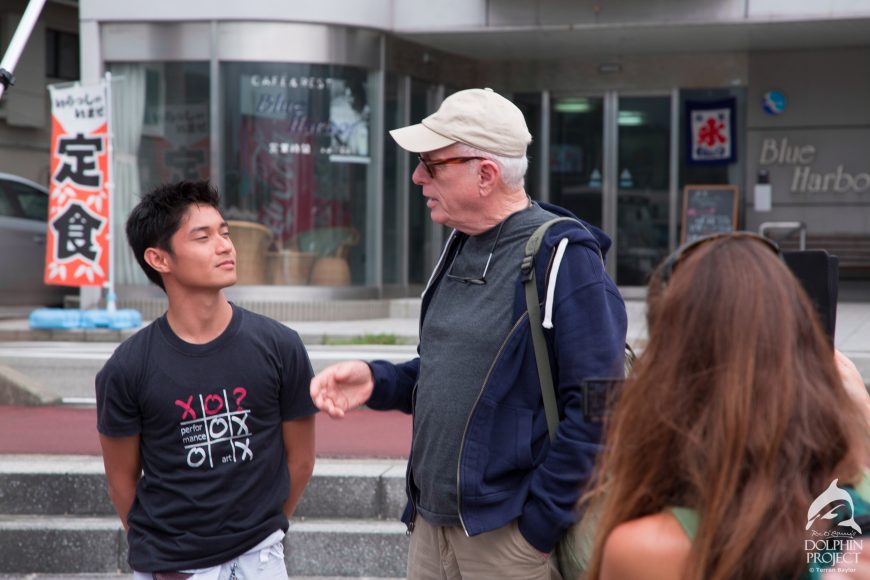 Ric O’Barry and the Dolphin Project Team are in Japan for a series of events in Tokyo and Taiji to oppose the annual dolphin hunts, which once again officially on Sept. 1st.  The Taiji dolphin hunters have a quota of 1,938 dolphins they can kill, although, in the past, the numbers of dolphins actually killed is less than half the quota, about 835 last year.

According to our sources in Taiji, the reason for the decline in the kill is that the market for dolphin meat has fallen sharply.  Our campaign, begun in 2004, helped highlight the fact that dolphin meat is heavily contaminated by mercury, methyl mercury, and PCBs.  It is unfit for human consumption, but Japan, under the influence of the powerful Japan Fisheries Agency, does not label the meat nor ban its sale.  But due to our publicity and the publicity around the Academy Award-winning documentary The Cove, the threat of mercury contamination is now well known in Taiji.

Our strategy is to continue to raise the mercury issue while condemning the hunts as inhumane, immoral, and destructive of the ocean ecosystem.

We are working with the Japanese – with the activists and with local support – not against them.  Because of our support for Japan generally, we open doors, educate the pubic, and help bridge the wide gap between the insular Japanese (who are kept ignorant by their government, not to mention intimidated) and the West on the plight of the dolphins.

In keeping with that effort, Ric and Team will be joined this year by Mr. Izumi Ishii, the former dolphin hunter from Futo who helped train the Taiji hunters to drive and catch dolphins in 1969 and later years.  He now believes dolphins should be protected and will join with Ric in speaking to the media, the office of US Ambassador Caroline Kennedy, and (attempt to speak to) the Mayor of Taiji and the Town Council.

Representatives from several countries traveling with them as volunteers will join Ric and Mr. Ishii.  Several volunteers will also stay on in Taiji after Sept. 1st for training as Cove Monitors, led by Tim Burns, Masako Maxwell, and Terran Baylor.

Here is their schedule, shared with Japanese media:

TOKYO, Friday August 29th, 2014:  NOON:  Mr. Ishii and Mr. O’Barry will present a copy of Mr. Ishii’s photos of dolphin hunting from his time in Futo, Japan, to a representative of the US Ambassador, in front of the US Embassy, Tokyo.

TAIJI, Sunday August 31st, 2014:  11:00 AM:  Mr. Ishii and Mr. O’Barry with supporters from Japan and other countries will be on the beach in Taiji at the Cove, where dolphins are slaughtered for food and caught for captivity.  They will hold a rally and special ceremony for the dolphins.

TAIJI, Monday September 1st, 2014:  10:30 AM:  Mr. Ishii and Mr. O’Barry will go to the Taiji Town Council office to attempt to meet with the leaders of Taiji to recommend alternatives to the dolphin hunt, such as dolphin-watching cruises, eco-tourism, sustainable fishing, and other ideas.  A request for a meeting has been sent to the Mayor of Taiji.

Japan Dolphins Day is an annual event headed by renowned activist O’Barry. He has succeeded in creating worldwide pressure against the Japanese dolphin slaughter through investigations and monitoring in Taiji, exposing toxic mercury in Japanese dolphin meat products, rehabilitating and releasing captive dolphins, and generating millions of signatures on petitions.