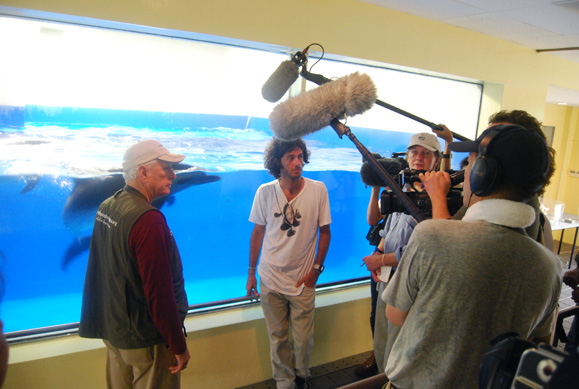 Who would refuse the chance to speak with Ric O’Barry, renowned hero to millions of people and dolphins around the world? No one in their right mind would– that is, unless you are a company trying to exploit dolphins for profit.

This was the unfortunate scenario that played out in Singapore on Monday. Ric wished to appeal to Resorts Word Sentosa’s compassion in order to convince them to discard their plan to enslave the 25 remaining dolphins currently being held in the Phillippines (two of the original 27 that were caught have already died in captivity). These dolphins, which were taken from the wild off the coast of the Solomon Islands, are slated for a life of mundane servitude and sterile environments at RWS – and are also anticipated to bring in millions of dollars each year for the company.

Ric attempted to schedule a meeting with the company’s chief executive, Tan Hee Teck. Upon arriving at their offices, however, Ric was informed that neither he nor any of the senior management staff were available to meet him. On a Monday morning, no less!

Ric will continue his work against companies like RWS, alongside organizations such as ACRES who initially brought the Sentosa 25 dolphins to international attention. While Ric may have experienced on small setback on Monday, public outcry against RWS will ultimately save these dolphins and the many others in captivity around the world.