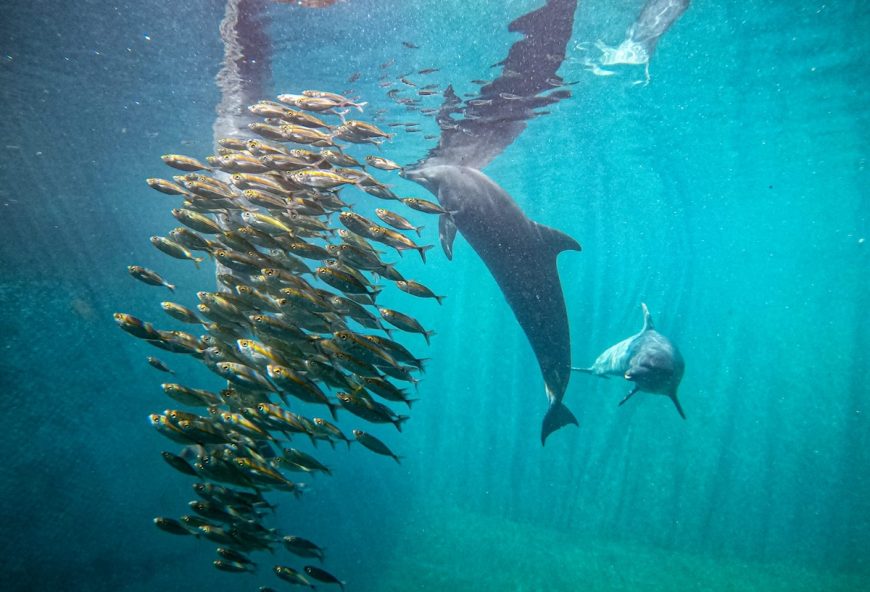 Three years ago in 2019, Johnny was rescued from a life of servitude. He was critically underweight, his right pectoral fin was injured, and every one of his teeth was worn below the gum line. Captured in the Java Sea, this older bottlenose dolphin was carted from town to town, and forced to perform in Indonesia’s now-defunct traveling circus. His next stop was a heavily chlorinated concrete tank in the Melka Excelsior Hotel in North Bali, where, for many years, he was held in isolation.

Fast forward to 2022: Under meticulous round-the-clock care at the Umah Lumba Rehabilitation, Release and Retirement Center, the world’s first and only permanent dolphin rehabilitation, release and retirement facility for formerly performing dolphins, Johnny is the picture of vitality. No longer underweight, he spends his days exploring his underwater world, swimming with Rocky and Rambo, the two other rescued dolphins at the Center and has recaptured his joy of living.

For three years his caregiving team closely evaluated him for a possible release candidate. But one problem remained: While Johnny was able to chase fish, he was not good at grasping and repositioning them to swallow, the fish slipping through his bite. This was attributed to the lack of teeth protruding above the gum to grasp the fish, giving rise to the concern that Johnny might not be releasable. As Johnny is the alpha male of the pod, releasing Rocky and Rambo in his absence could have compromised the success of the release. Leaving Johnny behind and in solitary confinement was clearly not an option.

“The thought of freeing Rocky and Rambo and having to leave Johnny behind—and in isolation—was unbearable for all of us. But what could we do? Johnny’s teeth were worn down to the gums. He couldn’t catch fish properly. So we got busy, we got creative. “Leave no dolphin behind” became our new mantra. And we turned Johnny into a bionic dolphin!” ~ Ric O’Barry, Founder/Director of Dolphin Project

Discussions began to take place on the possibility of placing artificial crowns in Johnny’s mouth. Dolphin dentistry is in its infancy, with such a procedure never before attempted. We worked closely with Dr. Paolo Martelli, who, since 2009, had carried out a variety of dolphin dentistry procedures, including endodontic and orthodontic techniques. For the past eighteen months, Dr. Martelli, in consultation with dentists and veterinarians across the world, developed the first-ever technique to give Johnny his much-needed crowns.

After careful planning, including running full bloodwork on Johnny, and taking a comprehensive set of x-rays to ensure his teeth were suitable for the procedure, a decision was made to go ahead. Under Dr. Martelli’s training and close supervision, our staff veterinarian, Dr. Deny Rahmadani placed a total of 22 artificial crowns over a period of three days – 14 on his bottom jaw and eight on his upper jaw. As the drilling was done in a part of the teeth that no longer had nerve endings, Johnny experienced no pain. In fact, during the procedure, Johnny willfully came to us, and required the use of neither sedation or nor restraints. (We had previously exposed Johnny to an electric toothbrush, in order to familiarize him with the sound of drilling and the vibrations). The materials used were made with a light-colored resin and molded into new teeth, similar to how humans receive fillings. Follow-up x-rays confirmed the crowns Johnny received were of very high quality. 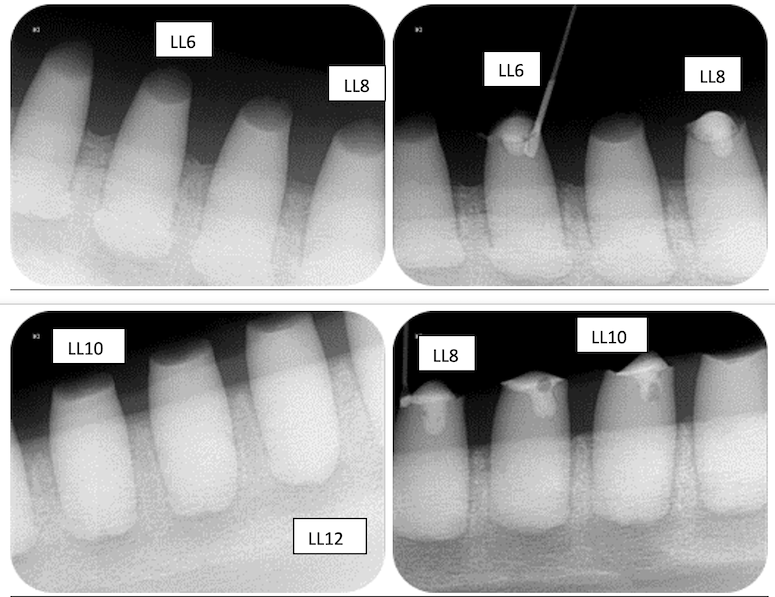 A sampling of Johnny’s dental x-rays, before and after the crowns were placed. Credit: DolphinProject.com 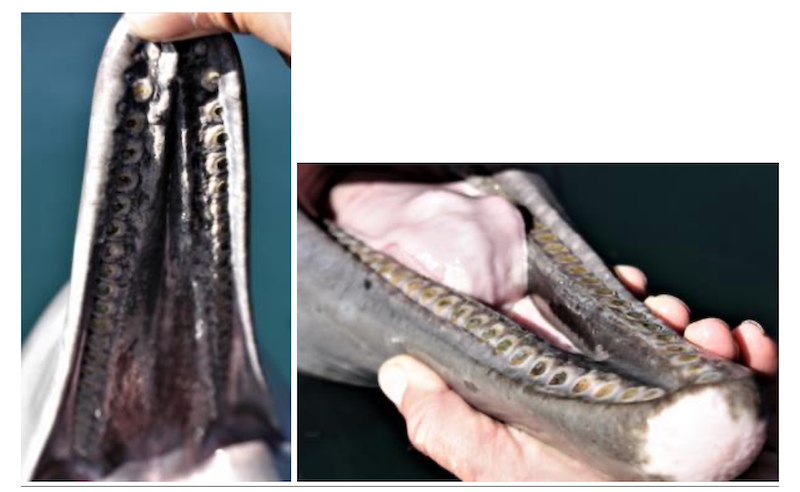 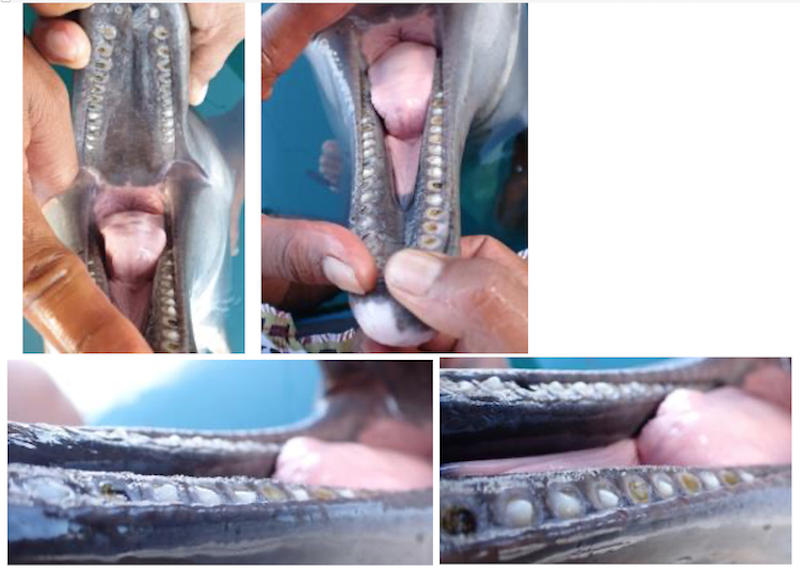 Johnny’s jaw after crown placement. Teeth with crowns are recognizable by their white color and protruding above the gum line, offering grasping power to the bite. Credit: DolphinProject.com

Approximately one hour post-procedure, our team witnessed Johnny successfully hunting and catching live fish in the foraging pen (a specially constructed pen for live fish feedings). It was immediately apparent he was experimenting with his new crowns. To our delight, his grasping power and manipulation of the fish dramatically improved to within the normal behavior of his species, with Johnny now capable of catching and positioning fish in order to swallow them head-first!

It’s been three months since Johnny’s crowns were placed. In other species that use their teeth much more forcefully (i.e., seals and sea lions) the dental material has lasted over five years. We are optimistic that these crowns will remain in place even longer in Johnny. And, unlike human teeth that rub together, a dolphin’s teeth are interlocking. We had originally planned on placing 16 crowns, but placed 22 in case any are lost over the years.

As a result of this successful procedure, coupled with Johnny’s excellent mental and physical health and well-being, he is now being actively prepared for release.

During Johnny’s years in captivity, so much had been taken from him. We are so grateful for this opportunity to have helped restore his independence, and soon, return him to his proper home in the sea, wild and free. But none of this would have been possible without your loyal support. Please consider Adopting a Dolphin today as much work still needs to be done as we prepare Johnny, Rocky and Rambo for release. In addition, post-release tracking will be conducted for one year so funds are still urgently needed.