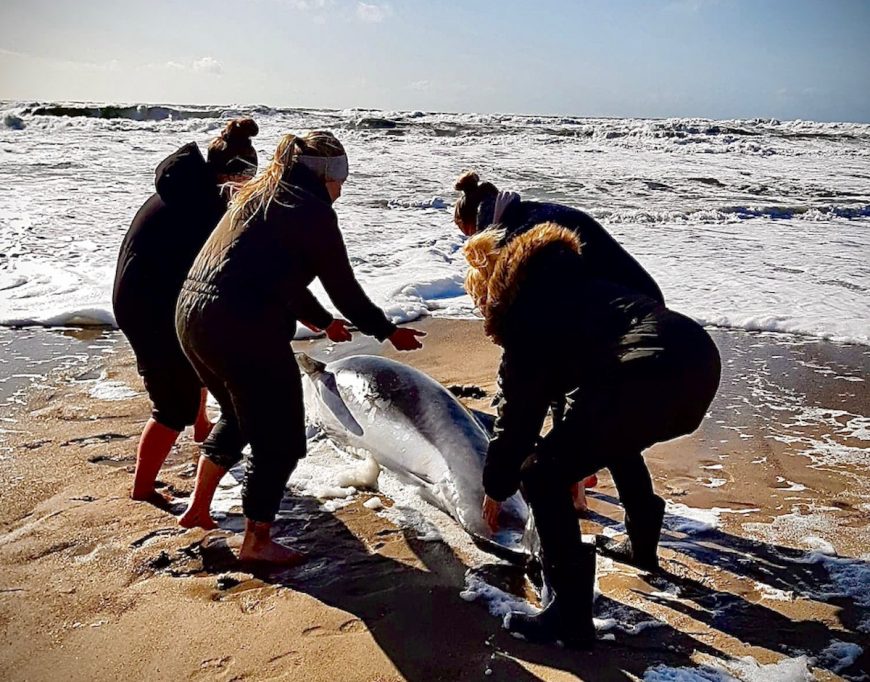 If you went for a walk on the beach and all of a sudden saw a dolphin lying in the sand helplessly stranded what would you do? I know what I would do. I would do everything I could to help that dolphin. If there was no one else on the beach, I would call for help. A woman in Denmark found herself in that exact situation on April 9th. Her name is Rikke Soelberg Hansen, and she was vacationing in a summer house in Vejlby Klint, which is located on the west coast of Denmark. Earlier that day, she went for a walk at about 3:00 p.m. This is when she saw a dolphin that had become stranded on the beach. She immediately called a Danish animal welfare organization. The lady who answered the phone suggested she find a raincoat and try to haul the dolphin back into the sea that way. It was obviously an impossible task for one person, and the animal protection group then said it would make use of its contacts to get someone from the Danish Nature Agency to help.

The Danish Nature Agency is an agency under the Ministry of Environment and Food and manages various tasks in forests and along the shores of Denmark. When Rikke had called the Nature Agency herself, all she got was an automated voice service saying to call back on Monday. To Rikke’s relief, several other beachgoers came along, and they all tried to get the dolphin back into the water. But the dolphin was too heavy for them, and the sea too rough, and so the attempt was unsuccessful. Growing increasingly desperate, Rikke kept calling whomever she could think of. Apparently, the animal protection organization told her numerous times that help would arrive on the scene in just an hour. But no one showed up. Rikke posted a plea for help on Facebook, and her post was shared multiple times. At 4:40 p.m., Rikke finally got through to someone at the Danish Nature Agency. The person she talked to promised to relay the message to the proper person. This gave Rikke much hope that assistance was finally on its way.

I didn’t know about any of this until I saw Rikke’s post on Facebook Saturday evening. I called the animal protection group to get an update. I was told by the person who answered that the local beach warden was on the case, and that this kind of thing was his job to deal with. In my naiveté, I thought the dolphin was getting the help it needed. But I still felt uneasy about it, knowing the dolphin had been stranded for hours, and authorities had been slow to act, so my daughter, Mai Li, and I decided to drive there ourselves to see how the rescue operation was coming along. It was pitch dark when we arrived at the beach, which is about a three-hour drive from where we live. We expected to see a team of people, flashlights, and activity on the beach when we arrived in the middle of the night.

But there was nothing. Just darkness and the sound of roaring waves that came crashing against the shore. We walked up and down the beach with our flashlight but couldn’t find the dolphin. At first, I was relieved. The rescue team must have been successful, I thought. We waited in the car for a while, and just before sunrise ventured down to the beach again. I was hoping that, once again, we would find nothing. Then we saw the outline of a dolphin lying in the sand several meters from the water’s edge. As we got closer, we could see that she was still alive. She was breathing and moving her tail fluke just slightly. She was a white-beaked dolphin about two and a half meters long. So, there we were, Mai Li and I on the beach, by ourselves, and with a helplessly stranded dolphin in front of us. Where were the authorities? Why didn’t they come? 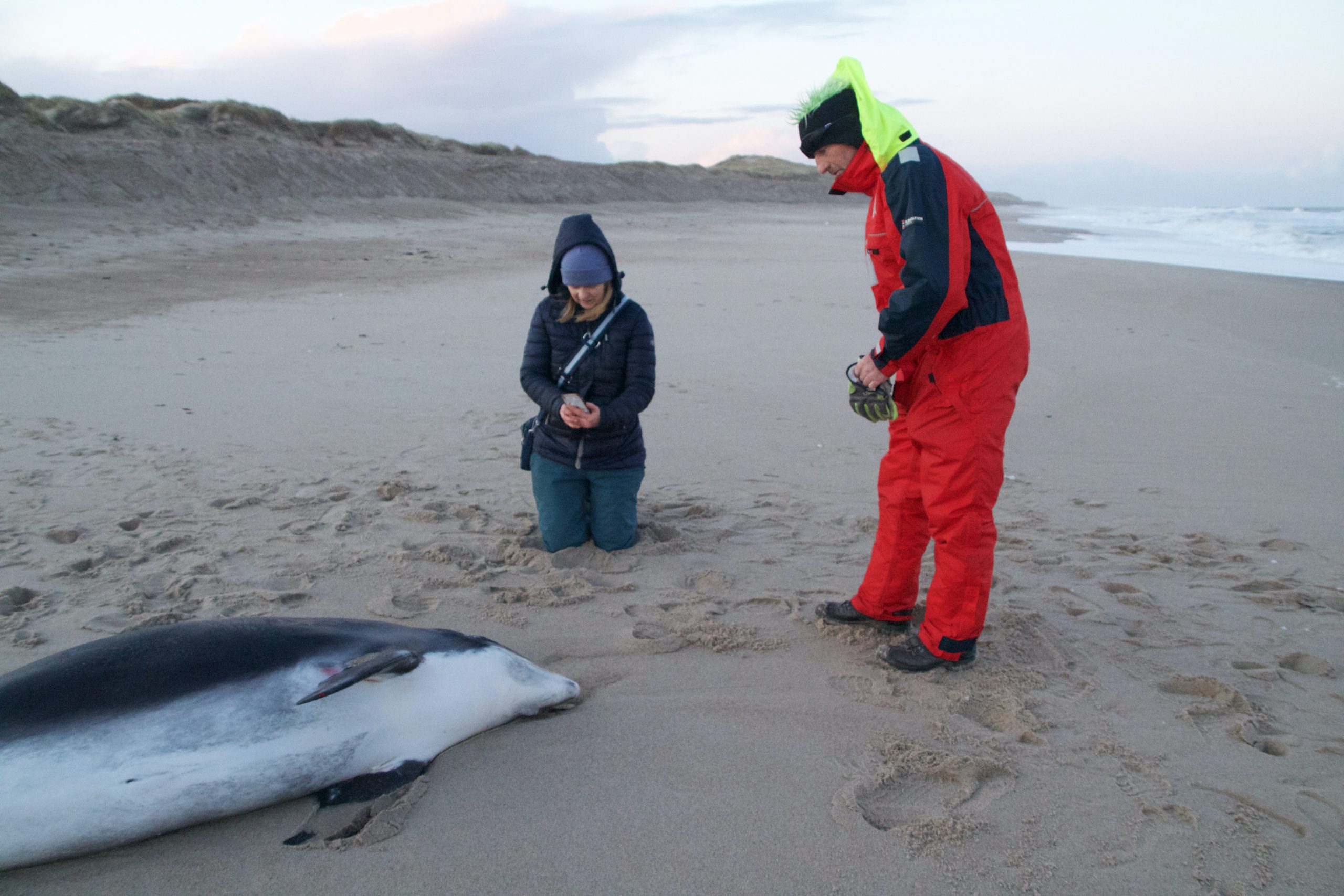 Then we saw an approaching figure, and I immediately knew who it was: His name is Jesper Stig Andersen. I had met him last November. He founded the Facebook group Delles Venner, which is dedicated to providing protection for a lone, sociable dolphin that showed up near the Danish town of Svendborg in 2019. That dolphin is known as Yoda in Moray Firth of Scotland, where he originally comes from. (In Denmark, he is known as Delle.) Jesper, too, had decided to show up to see for himself how the rescue operation went. So now we were three.

It would have been impossible for us to get the dolphin back into the sea. I also don’t think she would have made it. By that time, she had spent at least 18 hours out of the water. She appeared weak, and there was foam coming out of her blowhole. Her tail fluke was bleeding. It was the most desperate feeling in the world seeing her like that and not being able to help her. We fetched water from the sea and poured it over her. We sat by her side and tried to comfort her. Mai Li started to dig a trench in the sand with her bare hands, hoping that the dolphin could find its way back into the ocean that way. It was useless, of course. The surf was raging, and the water was ice-cold. We had no dry suits and no equipment. It was an exercise in frustration and anguish not being able to help this dolphin and having no place to take her to stabilize her. We needed help. 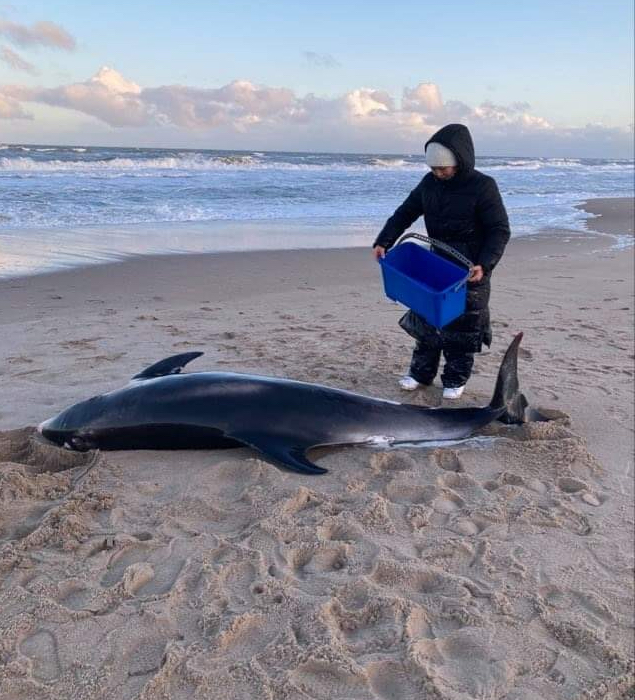 Mai Li O’Barry participated in an agonizing effort to save a stranded white-beaked dolphin off the coast of Denmark on April 10, 2021. Credit: Helene O’Barry

There was no beach warden in sight, and no one from the Nature Agency had shown up, either. We called whomever we could think of. We got in touch with an employee at Fjord & Bælt, which is a facility in Denmark that keeps harbor porpoises in captivity. I am obviously not a supporter of keeping harbor porpoises captive, but the woman I spoke to was the most empathetic and helpful person I had encountered throughout this whole ordeal. She promised she would help. She got in touch with an employee at an aquarium in Denmark where they keep seals and various fishes. He called us and said a wildlife consultant who worked with the Nature Agency was finally on his way, and this time it was for real.

The wildlife consultant arrived at about 9:45 a.m. He said he would have come a lot sooner if he had known about it. He also said the Nature Agency had decided the dolphin had to be euthanized, as it would not survive being reintroduced to the ocean. She had been out of the water for too long, and her organs were likely damaged. He insisted the dolphin was sick when she stranded. “Most of them are, and they can’t be saved,” he said. He euthanized her with a bullet to her head. It was hard to watch, and I hope she died right away. A local TV crew came right after the wildlife consultant was about to leave the scene with the dolphin in a bulldozer. She would be taken to the aquarium for an autopsy, he said.

According to next day’s media reports, the proper person at the Nature Agency did not hear about the stranded dolphin until 8:00 p.m. on Friday. At that time, he was in Copenhagen and unable to find anyone in the area who could come to the scene. He determined the dolphin was sick and would probably just die on her own during the night. For him to make that decision without even having seen the dolphin makes no sense at all. And for authorities to think it is okay to leave a stranded dolphin to suffer for so many hours is objectionable. She was no doubt stressed, scared, and in pain during the ordeal.

The autopsy has revealed that the dolphin wasn’t sick at all. She was healthy when she stranded. Most likely, she was pushed ashore by the storm and unable to get back into the water on her own.
If Denmark had a real stranding network, like they do in the United Kingdom and, as far as I know, in Holland, the white-beaked dolphin might still be alive and swimming in the ocean this very moment.

A group of people in Denmark are now trying to create such a stranding network, hoping that what happened to this ill-fated dolphin will never happen again. Some people who followed the situation closely on social media have said that one needs to let nature take its course in situations like this. “Animals die all the time in nature; it’s part of life,” they say. Yes, for animals to die is part of the life cycle, but when one encounters an animal that is clearly suffering and in need of help, what would be the point of not trying?

In our thoughtless self-indulgence, humans are taking so much from nature every day; we are destroying the oceans with our fishing nets, pollutants, and noise pollution. For dolphins to have to face all these humanmade threats is clearly not part of nature’s life cycle, and it seems that we would grab every opportunity we can to give something back and show some much-needed compassion. It is easy to sit behind a computer screen and talk about letting nature take its course, but when you meet a dolphin in person that is helplessly stranded and needs help getting back into the water, what person in their right mind would chose to look the other way and do absolutely nothing? Wanting to help is called empathy. The world needs much more of that, not less.

Featured image: Rikke Soelberg Hansen and other beachgoers make a desperate attempt at saving a dolphin that had become stranded on the west coast of Denmark. Credit: Oscar Soelberg 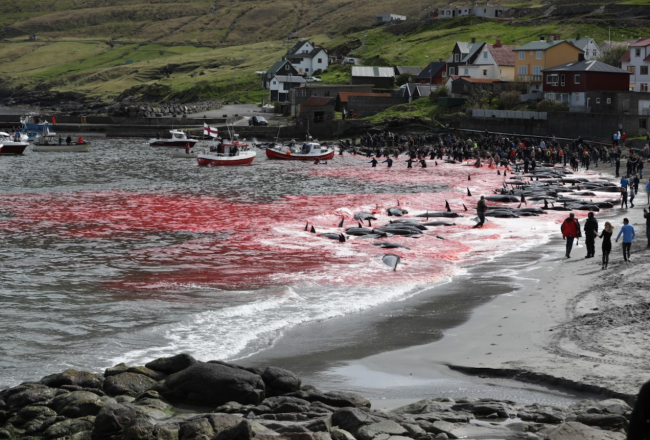 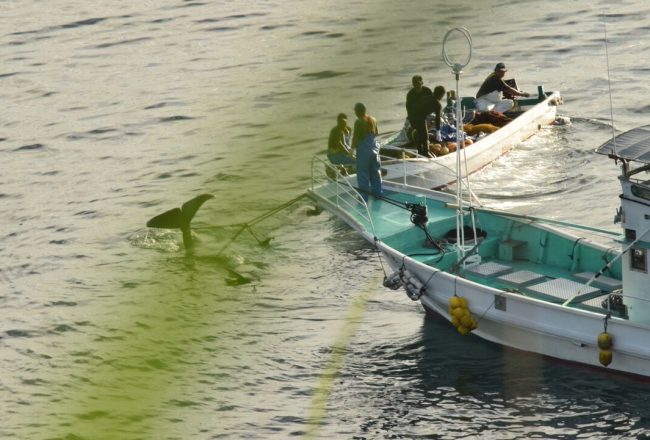 Taiji to Unite with Faroese in Sister City Agreement

One might say that Taiji and Klaksvik deserve one other, given the extreme cruelty both towns inflict upon dolphins and other whales.
read more