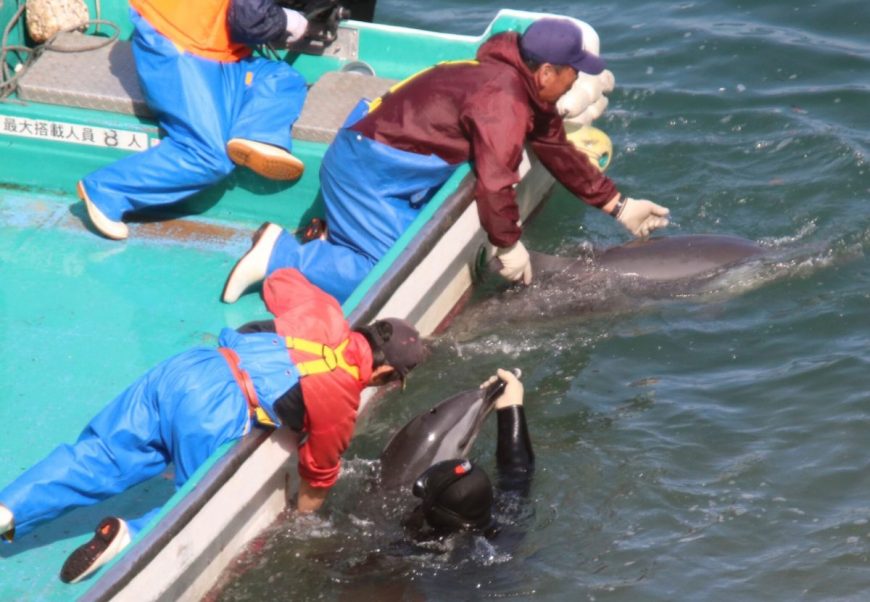 Taiji, 2-26-17: The dolphin hunting fleet of Taiji left early in the morning (6:30 a.m.), with 11 boats fanning out from north to south in search of dolphins. At around 9:00 a.m. we noticed two fishing vessels (similar to bangers) heading towards the south, still very far out. We were able to get a long distance photo and verify they indeed had banger poles on them. At this point, it was clear a drive was happening, and by 9:20 a.m., we saw the typical formation line.

We could see the pod was very large, jumping completely out of the water as they attempted escape. It was a breathtaking – albeit tortured – sight as they were literally swimming for their lives. The next time we were able to see the pod they were just outside the Taiji harbor. With their signature white-tipped rostrums, we confirmed they were pantropical spotted dolphins. This would be the second time this species would be driven in, the first taking place on December 12 of last year.

The banger boats drove through the pod, splitting them approximately in half, and these dolphins were driven back out to sea. The remaining dolphins were once again, pushed towards the cove, but suddenly, they too bolted in the opposite direction! Sadly, our hopes were dashed as the bangers raced to encircle them, and within minutes, nets sealed off their final chance at freedom.

As skiffs arrived with trainers, it became clear what the fate of these dolphins would be.

Taiji’s profits grew yet again as the captive selection began. As we live streamed on Facebook, the world watched as both hunters and trainers picked out dolphins, pushing them into the selection area. The mammals stuck very close to one another, and in the process of pushing them in, many were visualized with bloody injuries due to damage to their rostrums. Some of the dolphins turned towards the outside portion of the nets, watching the hunters as family and other pod members were ripped away from the group.

By the time it was over, 17 dolphins were taken via skiffs into a “life” of captivity. They will be trained, sold, then used for entertainment. The balance of the pod (approximately 65) were pushed back out to open water, as the same banger boats that drove them in now drove them out. We can only hope the terrified pod that was forced to go through a very aggressive, manhandling selection process will find the other half of their family.

Continue to follow us on our social media for breaking news and live updates from #The Cove.