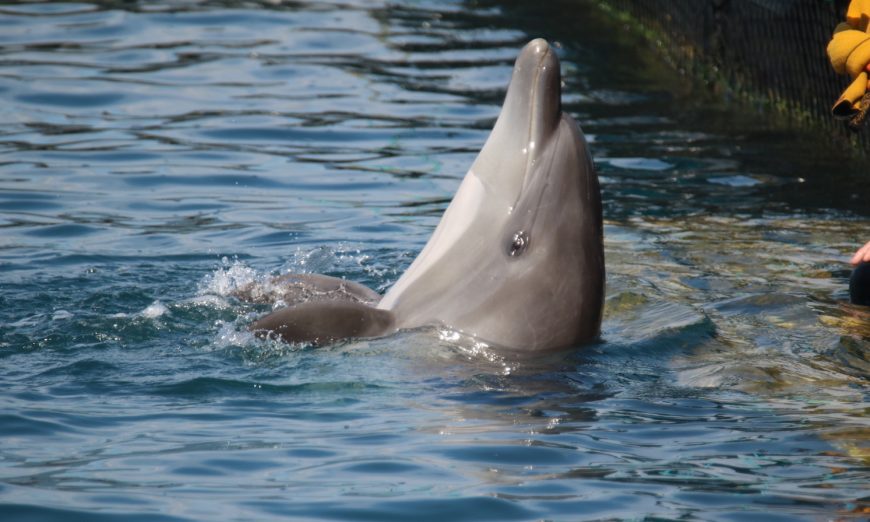 Thought by many Japanese to be the birthplace of Japan, this sleepy, little fishing village located at the base of the Katsuura mountain range has seen more than its share of horrors. And while we are reminded this is a spiritual place for both the Buddhist and Shinto religions, the dolphins who swim off the coast of Taiji are routinely subjected to anguish and horror. It’s a dichotomy that’s difficult to digest: on one hand, the Buddhist symbol for good luck has been placed in the nearby mountain top overlooking Taiji and yet on the other, it’s been marred by the visuals of black smoke and the bleak sounds of hunters banging on “banger” poles as dolphins are driven into the cove.

The movie of the same name won an Academy Award in 2010 for Best Documentary. It featured Ric O’Barry, Founder/Director of Dolphin Project who had been visiting Taiji for 13 years, multiple times per year to draw awareness to this issue before his unwarranted deportation in February. And while the world’s eyes are on this infamous village, it’s business as usual for the hunters who capture dolphins for profit. With upwards of $152,000 USD per mammal and a seasonal quota for 2016/17 of 150 live captures of bottlenose dolphins, it’s easy to see how lucrative this trade is. But what isn’t seen by the paying public who supports dolphin shows is the hidden cost to those captured.

What is best described in photos, we’ll show you where your entertainment comes from:

Taiji, 12-19-16: We watched as the hunters went out in the early morning in search of dolphin pods. The ocean was flat and the weather, beautiful – not a good sign. Our fears were confirmed as the undeniable line of boats began pushing a pod of bottlenose dolphins towards the cove. Forty-five minutes was all it took for the nets to be drawn, preventing the mammals from any chance of escape.

The hunters took a break for their lunch and returned with three skiffs filled with buyers and trainers. They all disappeared under the tarps.

Taiji’s hunters have been claiming the dolphin hunts are a tradition, something they are proud of, yet they are covered up in attempts to hide the goings-on here from the rest of the world. No tradition is worth covering up unless you are ashamed of it.

We listened via a microphone as hunters, trainers and buyers conducted their business. They began weighing the dolphins as the mammals were sorted and picked through. After several minutes, four dolphins, typically the most unblemished were selected for captivity, destined to entertain at a marine park until their demise. Skiffs soon emerged with the four dolphins secured in slings, forever removed from their wild world. Everyone was smiling and laughing in celebration of their bounty. The tarps were pulled back (the ones they use to conceal their proud “cultural” tradition) and we wondered what had become of the remaining mammals.

We noticed two dolphins had bright, green tags attached to their dorsal fins. Earlier this year, scientists in Tokyo confirmed that the tags are placed on the dolphins so hunters know these mammals have already been sorted and not to drive them into the cove at a later date. We were also told this was a practice learned from SeaWorld, when they used to take captive dolphins from the wild.

The nets were then pulled back and hunters banged on metal poles positioned over the sides of the boats. As they had done during the drive, this acoustic wall of sound was used to “drive” the dolphins back out to sea. Local fishermen, concerned with dolphins eating “their” fish, ensure the hunters push them as far out as possible.

Tagged bottlenose dolphins before being driven back out to sea, Taiji, Japan
Credit: DolphinProject.com

We moved to the harbor to check on the new captives. They were difficult to visualize as there was a large presence of police. We eventually saw two of the dolphins as they huddled together in fear. We observed another captive, clearly underweight as it was put through training practices.

Once these dolphins are acclimated and trained to follow human direction, they will be shipped to facilities around the world. There, they will have to adjust to a new environment, a new set of trainers and subject to endless performances in order that they receive food. Many will die during the training process, many will perish in transit while others will simply “disappear” from shows, only to be replaced by other dolphins. The reason? Profit.

We ask that you share this blog and educate others on the grave reality of dolphin captivity. Follow us on social media for live updates as Dolphin Project Cove Monitors continue to document from Taiji, Japan for the duration of the hunting season. Together, we WILL end this madness.