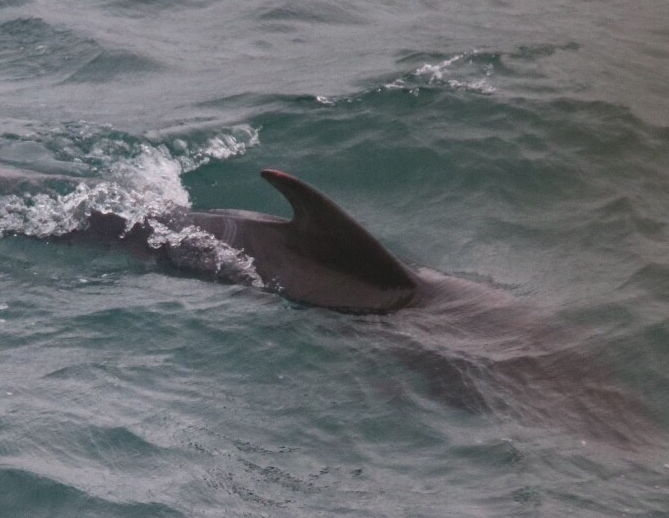 The level of cruelty witnessed these past, four days should be unspeakable. As I heard mentioned today, thoughts such as these don’t normally enter healthy minds.

On the fourth day of this horrific ordeal, with the remaining pilot whales suffering from hunger, dehydration, exhaustion and torture, it was impossible to predict how many would survive through the night. The first thing I saw this morning was one of the adult pilot whales floating in the cove – dead.” ~ Cynthia Fernandez, Dolphin Project Cove Monitor

Predictably, divers slipped into the water, and began dragging the dolphins under the tarps. Soon, the thrashing began, caught on Dolphin Project’s Livestream and the water once again, ran red with the blood of the dead.

All the adults had been slaughtered. Gone was the matriarch who comforted the juveniles when the pod was first driven into the cove. Gone were the large males who protectively circled the rest of the group. In fact, most of this pod, with the exception of approximately 15-20 animals from a pod now estimated at around 60, were no longer. The dolphins who had survived the ordeal were all young, comprised of babies and juveniles. They appeared lethargic and their breathing, uneven. Yet, they hovered close to the area where their family members were killed, refusing to leave. They took turns spyhopping as skiff after skiff of dead pod members passed them. Once all the bodies were removed from the cove, the skiffs and banger boats prepared to drive the youngsters out to sea. That’s when an entirely new level of torture began.

The release itself is an entirely separate story. In some ways, it’s as horrific, if not even more so, than the actual slaughter itself.” ~ Cynthia Fernandez, Dolphin Project Cove Monitor

Metal slings carried the juveniles and babies out of the cove, still murky from blood. But the release went horribly wrong. A small pilot whale escaped the sling, swimming back towards the cove, presumably to look for its family. Another dolphin became entangled in the sling and drowned. Yet another animal slipped out of the sling, thrashing wildly against the boat amidst rough waves and wind. Notably, there was much time between each release, with the dolphins not being released as a pod. The chances of their survival amidst such extreme trauma is minimal. Babies won’t be able to nurse. There will be no adults present to protect and teach the youngsters. In fact, several appeared near-death at the time of release.

It’s hard to put into words the horror of what transpired over these four days.

The bonding and loyalty the pilot whales displayed towards one another was heart wrenching. Who could forget the demonstrations of care and affection? The moment they used their heads to push the divers away from the one captive whale taken from the group? The screams as each dolphin’s life was extinguished, to be reduced to packaged, toxic meat? This is the final update of a family of pilot whales, who once swam in the open sea and was driven into the cove in Taiji, Japan – only to endure three days of torture and eventual death. Out of approximately 60+ animals, only 15-20 young dolphins were released. Out of this number, we estimate several will not survive. At least one, if not two animals died during release.

You can help stop this. We’re asking for your help on December 18th in London. Ten thousand voices are needed for the dolphins. Can you be one of them? See here.

Thank you to Dolphin Project Senior Cove Monitors Vicki Kiely and Cynthia Fernandez for their accounts in documenting this travesty in Taiji.