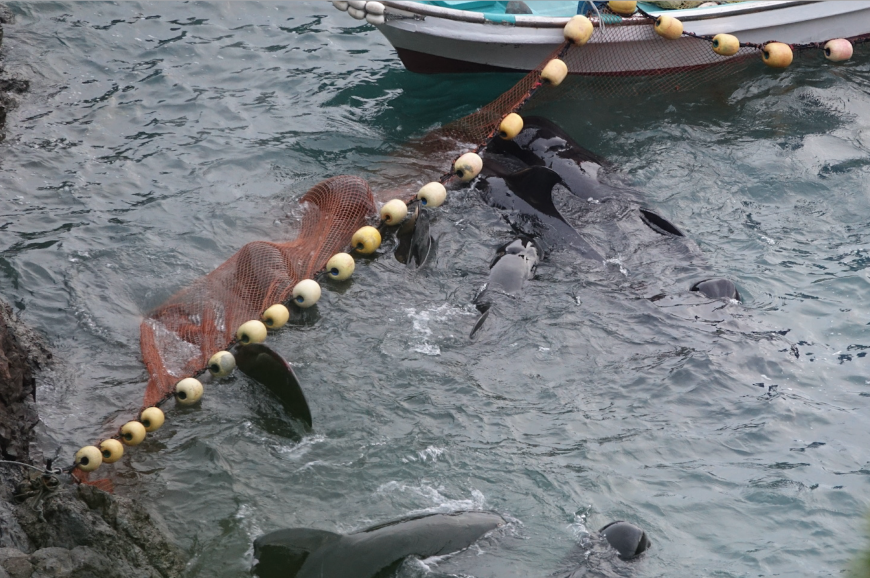 Taiji, Japan, 9/5/17: After three days of being held against their will in the shallow waters of the cove, with no access to food or water, and suffering from multiple injuries, the pilot whales’ torment was palpable. Their breathing, normally coordinated and steady, was uneven and rapid. Several of the dolphins were floating on their backs; lifeless, near death or having already perished from the stress and trauma of the hunt.

The drive process is brutal. Hunting down a nursery pod full of juveniles, holding them for three days without access to food or water, and then manhandling the terrorized dolphins to their slaughters…what a savage and barbarous way to go.” ~ Tim Burns, Dolphin Project Cove Monitor

Hunters proceeded to drag the bodies of every adult dolphin under the killing tarps, where they were tethered and slaughtered. The dolphins did not die quietly, their cries and violent tail slapping documented on our live broadcasts. Waters turned a murky red, with the surviving young swimming in the blood of their dead family members. When the bodies were eventually towed out through the cove, the juveniles, spy hopping while huddled close together, watched, occasionally vocalizing in a high-pitched manner consistent with extreme stress.

Twenty adults were killed, with one younger dolphin succumbing to injuries, for a total of 21 documented deaths. Trainers, while claiming to love and care for dolphins, worked alongside the hunters, selecting desired animals for “life” in captivity while others were slaughtered. Three young pilots were taken during the captive selection process. The remaining juvenile pilots, approximately 20 in total, were eventually pushed out to open water. Pilot whales are comprised of a matriarchal society, complete with their own cultures and traditions. With no adults or “pilot” to guide them, their chances of survival are minimal at best.

With Dolphin Project Cove Monitors documenting each day of this three-day drive, we were able to capture in video and audio the extreme cruelty of Taiji’s dolphin hunts. We have included some of this media below and ask that you watch and share these videos.