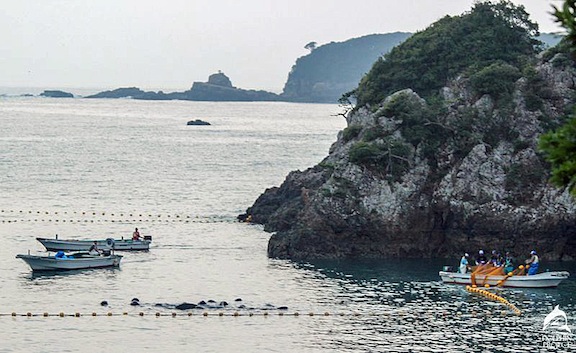 Earlier this month only bottlenose dolphins were being driven into the Cove.  The bottlenose species are at the top of the cetacean captivity business shopping list.  “No bottlenose dolphins are to be killed for food during the month of September” is a basic (and very weak) agreement between the international captive industry and the wild-caught captive dolphin fishermen of Taiji.  The World Association of Zoos and Aquariums (WAZA) inked out this deal – so the captive dolphin business could say the dolphins came from non-killing dolphin hunt.

We found WAZA doesn’t include losses of dolphins in the capture process, such as a baby dolphin that died during the brutal captive drive a week ago.  This agreement also doesn’t cover other dolphin species, which we found out on September 12th.

By 6:45AM, we could see a line of hunting boats encircling a pod fairly far out on the horizon.  Three hours later we could see the pod just a mile or so away.  By 10:30AM the pod was being netted into the cove.  A pod of pilot whales was caught, and within this family unit was a very big animal – possibly the grandparent of the rest.

Dolphin hunters typically end their working day before 2PM, so they could start selecting pilot whales for captivity or possibly slaughter them for food.  In either case they netted off the cove, and placed signs up indicating the whales were now OWNED by the Taiji Fishermen’s Union.  Doesn’t make any sense to say these were once wild creatures with lives, and then after being driven for long distances and pushed around – they are now the property of human beings.

The next day, September 12th, was what we call a Red Cove Day.

At the crack of dawn, the dolphin hunters were already at work.  No selection process for captivity – just divers manipulating the scared and tired pod deeper into the killing Cove.  We knew at this point that today was not going to be a blood-free day at the Cove.

I had a great pair of fellow Cove Monitors with me.  Both Melissa Thomson Esaia and Vickie Collins started documenting the pod being decimated in the Cove.  Vickie Collins took all the photos herein.  She really did a great job considering this was her first Red Cove day – it takes a lot of heart to keep your emotions in check while documenting something as extreme as mass dolphin killing.

Pilot whales are very family oriented and fiercely loyal, even more so than most other species of dolphin.  Overnight the pod stayed very close to each other – creating a tight-knit group – most likely trying to keep their family safe.  Safety is fleeting here in Taiji for dolphin/whale pods, as they were about to learn quickly.

While the hunters and divers were leading groups of the pod into the killing area, a lone juvenile was able to get past a net and headed toward the beach and rocky shoreline, away from the pod.  A diver was pulled along with no control as the scared lone pilot whale tried to find a way out while almost beaching itself.  Luckily Vickie was there to witness this event and relate the story for this blog entry.  Sadly the pilot whale was eventually coaxed back into killing Cove area.

A diver pushes a lone, frightened juvenile pilot whale back to the killing Cove.  Photo by Vickie Collins.

Standing above the Cove, we could clearly hear what sounded like constant waves crashing on the shoreline.  It made no sense since the ocean was very calm.  Then it was very clear – the pilot whale tails were thrashing hard while they were being killed slowly.  I’ve heard dolphin tails make a fast “swapping” sound against the water, but this was very constant and lasted for minutes.  While the Cove was turning red you could see pod members swimming through the blood of their family.

Skiffs would take the dead pilot whales dragging them alongside to a waiting hunting boat where they would transfer the lines attached to each tail.  Then hunting boat would take off to deliver them to the processing building around the corner in Taiji harbor.  Once processed, the wholesale butchers who work in other buildings around Taiji, will cut and trim the whale meat for sale.

Taiji town like all the fishing towns have a loudspeaker system, announcing all kinds of daily events. Maybe just the time, or tsunami – but today a friend there at the Cove translated the message and said it was to announce fresh whale meat and people should come with their “coupons”?  Coupons for whale meat.

The Cove was eventually netted off – still with six live pilot whales  – juveniles not worthy for butchering.  We are told that the hunting boats will then take these remaining and drive them out to sea.

Pilot whales in the killing Cove.