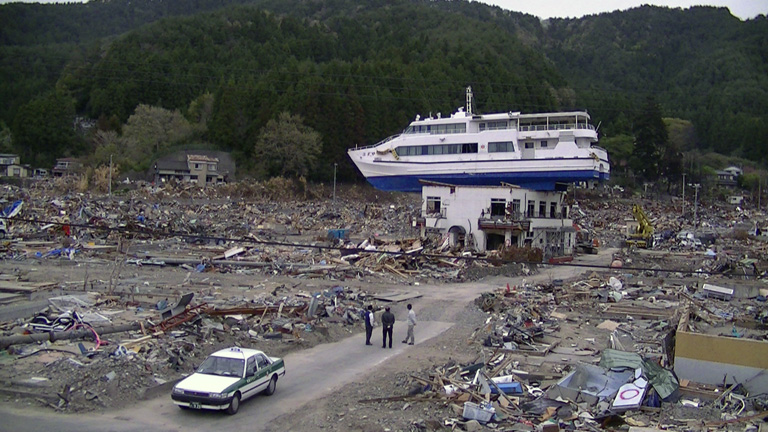 Around 20 were killed in the Cove this morning and will show up in markets as meat.  Probably around 20-25 were herded out to sea by the boats.

We believe two were taken into captivity to the Taiji Whale Museum.

We have found out why Taiji is killing pilot whales this late in the season, and it is indeed a shameful tale:

In the northern Japanese port of Ayukawa, catcher boats with harpoon guns are maintained to go out every spring to hunt whales offshore of Japan, as part of Japan’s bogus “scientific” whaling.  The hunts are targeted at minke whales, although other species like beaked whales and even small pilot whales are also hunted if they are found.  The dead whales are then towed back to the processing plant in Ayukawa.

However, that meat plant was destroyed by the tsunami on March 11th.  The catcher boats were dragged out of the harbor by the wave and ran aground down the coast, causing considerable damage to those vessels.

So the Japan Fisheries Agency, which now runs the whaling operations in Japan, borrowed the catcher boats that are normally based in Taiji to bring them north to the island of Hokkaido, where the minke whale hunts have been transferred this spring.  The catcher boats are not expected to return to Taiji until September.

(The Kyodo News Service issued a bulletin that the Taiji whale hunts had been canceled this year, but this does not apply to the drive hunts for dolphins and small whales.  It only refers to the offshore hunting of whales by these catcher boats.)

To just add to the madness, Taiji claimed that (1) anti-whaling groups hindered their catching their quota and (2) pilot whales and false killer whales didn’t come to offshore Taiji anyway.

Of course, the first claim by the government of Taiji is outrageous!  Dolphin Project and other organizations had representatives in Taiji during the hunts this year, but no one did anything to the dolphin killers to interfere with their hunts.  And the second claim just shows that pilot whales and false killer whales know better, after years of harassment, to come near Taiji.

All in all, a very sorry episode in Taiji, and once again the Japanese government will be condemned by the global public for its continued refusal to end the hunting of whales and dolphins.

WHAT YOU CAN DO:

Contact the Japanese Embassy in Washington DC and urge them to stop killing dolphins and whales.  Be polite, and urge them to protect Japanese consumers from mercury poisoning from eating dangerous whale and dolphin meat.