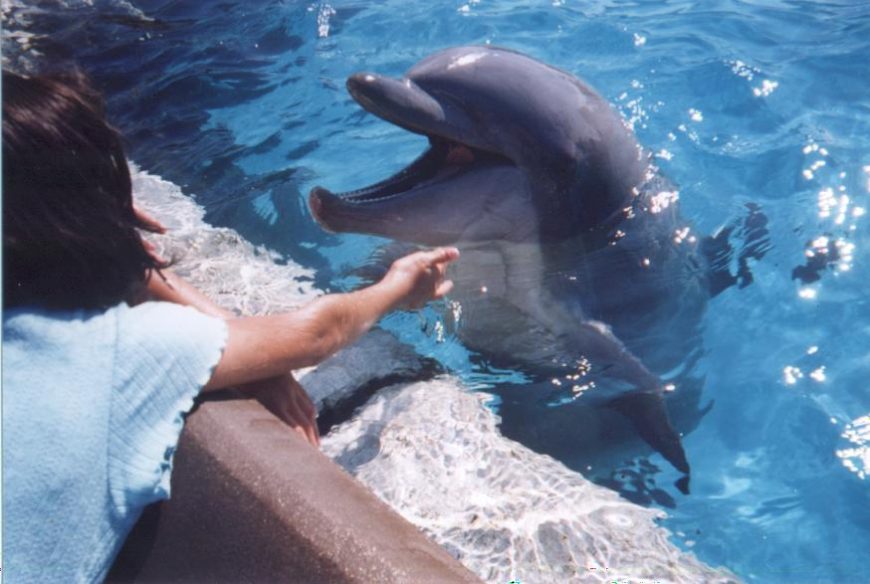 When I heard that eight-year-old Jillian Thomas was bitten by a dolphin at SeaWorld Orlando’s dolphin petting pool, I was not surprised. This kind of thing has happened before,  and it will likely happen again if dolphin petting pools remain open. What did surprise me, however, is that SeaWorld still allows this level of abuse to continue.

Many aquariums in the United States have already shut down their dolphin petting pools, citing their inherently abusive and unsafe nature. When you watch the video, you can see the level of chaos around the pool as dozens of yelling children hold out small fish for dolphins to beg for.

And beg they do. Captives are kept intentionally hungry, so that they are forced to interact with park visitors. As you can see, the fish portions are very small, to keep the dolphins constantly coming back for more and enduring the poking and prodding of thousands of hands on their bodies. In my opinion, these should be called ‘dolphin fondling pools’, for that is what they truly are.

Sometimes the dolphins are touched in rough or painful ways by well-meaning tourists. Inevitably, garbage is dropped in the pool, creating a choking hazard for dolphins. And visitors get injured by the dolphins. Clearly, the regulation of this facility is desperately inadequate, putting both dolphins and humans at risk.

Regulation of dolphin interactions can be difficult even when it involves experienced professionals. The recent death of SeaWorld trainer Dawn Brancheau demonstrates that cetaceans don’t always follow the rules – especially when they are stressed, frustrated and demoralized, as captives tend to be. Expecting children to follow the rules in an uncontrolled chaotic environment such as the Discovery Cove petting pool is a recipe for disaster – something that SeaWorld is hiding beneath a false sense of security and by laying blame on parents for not controlling their children.

Of course, there are big incentives for SeaWorld to continue to exploit dolphins in their petting pools. Charging exorbitant prices for the small feeding fish adds to the enormous profits that the dolphins already bring in. It’s really a win-win for Sea World and lose-lose for the dolphins – just business as usual at SeaWorld, I suppose.

It’s important to note that very few, if any cases exist of wild dolphins harming humans. Quite the contrary – there are thousands of stories and accounts of dolphins actually helping people. We are not returning the favor by keeping dolphins in these captive situations.

Jillian loves dolphins, which is why she and millions of others go to see them in the first place. But hopefully this experience has taught her that dolphin interactions like Discovery Cove at SeaWorld are not only cruel and unfair to dolphins, but are also dangerous for people. You should never buy a ticket to a captive dolphin show or experience. Instead, go out to the actual sea world – the ocean – and view them in their natural home, on their terms. This is a safe, rewarding and truly magical experience.