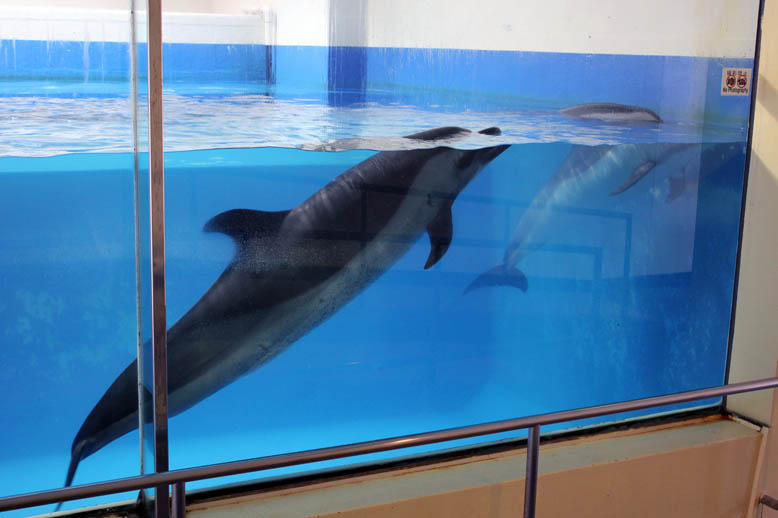 Sad and Lonely, the two spotted dolphins languishing in the smallest dolphin tank in the world in the Taiji Whale Museum, have been moved to a larger, open-air tank.

While the tank they are now in is not exactly huge, and lacks the stimulus of waves and natural seawater found in the sea pens, it is certainly better than the small dungeon they were locked in before.

A lot of the credit for this move is due to a mixed martial arts star, Enson Inoue, who has been visiting Taiji regularly to see for himself what the issues are around the dolphin drive hunts and captivity for dolphins.  Enson personally called the Mayor of Taiji about the problem of Sad & Lonely, and the mayor visited the Taiji Whale Museum’s smallest dolphin tank in the world to see for himself.

Taiji’s Mayor Kazutaka Sangen saw to it that Sad & Lonely were moved this past week to the larger outdoor tank, and the Mayor has renamed the two dolphins Hope and Faith.  Let us indeed hope that they do better in this new tank.

We at Ric O’Barry’s Dolphin Project would like to thank Mayor Sangen for his taking the time to make the changes at the Taiji Whale Museum.  (The museum is owned by the town of Taiji.)

Of course, Enson Inoue-san also deserves our most humble thanks for his efforts.   I have often stated that the plight of the dolphins will be up to the people of Japan to solve in the long run.   Enson appears to be taking the issues seriously.  He is a champion in more ways than one!

A big and warm thank you to all of YOU who signed our petition and have worked to end Sad and Lonely’s plight in the Taiji Whale Museum.  Sad and Lonely are not in a sea pen, much less free back into the waters of the Pacific Ocean, but things are better for them.

While handing out thanks, I want to also hand out a big “no thanks” to the World Association of Zoos and Aquariums (WAZA).  WAZA took no action whatsoever to safeguard Sad and Lonely, despite the efforts of thousands of grassroots activists.  It really is sad.  The organization should be ashamed of itself.  They did nothing.  And the Taiji dolphin slaughter, subsidized by the captivity industry that WAZA claims to represent, will continue.

I am grateful to all who helped the Sad & Lonely effort and the larger effort of ending the dolphin slaughter, once and for all.

Working together, we are making a major difference for dolphins.  Let us redouble our efforts in Japan and worldwide.