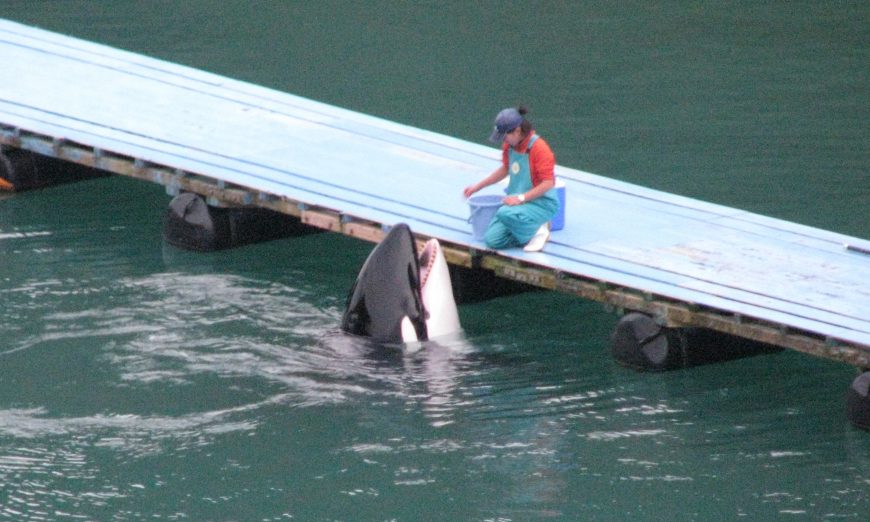 A photograph showing a SeaWorld dolphin trainer balancing a Pepsi paper cup on the rostrum of an orca was recently posted on Facebook.

The photograph, which was reportedly taken at SeaWorld’s amusement park in San Diego, has caused outrage among some Facebook users.  “SeaWorld’s world-class standard of care includes balancing trash on their animals!” one Facebook user comments.

Carol Currier, who advocates against dolphin captivity on her Facebook page, received a lengthy response from SeaWorld upon expressing her dismay at the photograph.  In response to Ms. Currier’s criticism, a spokesperson for SeaWorld refers to the paper cup incident as a “stimulation activity” where the trainer was having fun with the killer whale.  He describes SeaWorld´s philosophy that firsthand experience with marine life is “the finest way possible to create a lasting appreciation and respect”, and goes on to point out that the animals at SeaWorld are given daily enrichment and training activities.

I wonder if SeaWorld realizes what their response reveals about the lives of incarcerated orcas?  If SeaWorld takes the point of view that an activity as contrived as that of having a paper cup placed on its rostrum adds content to a captive orca´s life, then what does that say about that orca’s living conditions?   The fact that SeaWorld uses the term “enrichment” to describe the everyday handling of their orcas illustrates SeaWorld’s understanding that the lives of captive orcas are inherently impoverished and lacking in natural variety.

SeaWorld, of course, is not the only captive dolphin facility that makes use of such so-called “enrichment” activities.  A document explaining various training techniques at the National Aquarium of Baltimore, for example, describes how dolphin trainers use hula-hoops and Frisbees in order to “stimulate the animal´s brain.”

Orcas and other dolphins in the wild do not need paper cups or hula-hoops to occupy them.  Living in an ocean world rich in stimuli, orcas, according to whale researchers, have evolved complex cultures that are similar to those found in humans and chimpanzees.  Within these cultures, one generation of orcas passes down its specific survival skills, vocal behaviors, habits and preferences to the next.  Enjoying complete mastery of their ocean environment, orcas are known to employ sophisticated hunting techniques, and it is when chasing and catching live prey that all of their natural skills unfold: their speed and agility, their use of sonar, and their ability to communicate, cooperate and plan ahead.

In contrast, captive orcas are impaired by the restraints of their enclosures and unable to initiate any of the impressive tasks enjoyed freely by their wild counterparts.  They can´t hunt live prey and instead are fed dead fish as food rewards.  There is nothing for them to explore with their sonar in their concrete tanks, and they certainly can´t use their highly evolved navigational skills, since they aren´t going anywhere.  Confined in this way, with about as much diversity as one finds in a parking garage, captive orcas are not really living.  They are merely surviving, and monotony, no doubt, is a predominant factor in their lives.

SeaWorld uses the words “appreciation and respect” to explain away the photograph that has caught the attention of so many.  But the grandness of those words sounds hollow to me.  Indeed, it seems to me that balancing a disposable paper cup on one of the world´s smartest and most powerful predators in the animal kingdom and calling that “enrichment” constitutes the most condescending of insults against nature itself.