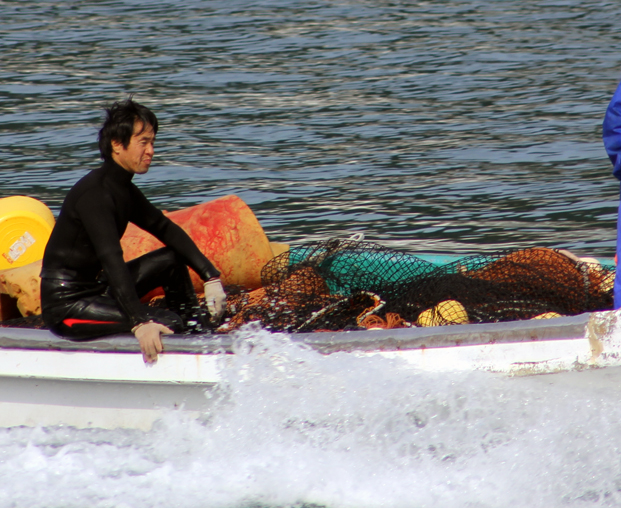 Today’s dolphin hunt supports the notion that the captive dolphin trade drives the slaughter more than ever.

Nine boats left the harbor this morning in search of dolphins.  Within an hour, some very odd things began to happen.  First we noticed five of the nine boats met just offshore.  Then one races at full speed back to the harbor.  As it passes we noticed there are five people on board.  The vessel left with 2 people from the harbor but is returning with 5?  Ten minutes go by, and another vessel races by us, this time with 3-4 people on board.  We watched very confused as the remaining boats got in a line and headed north.  By 8:45 it was clear, they had found a pod, a huge pod.  It was one of the largest pods I have witnessed in Taiji.  There were several hundred Pacific white-sided dolphins.

The skiffs began coming out of the harbor with nets on board, but not towards the Cove, which was a sure sign they were going to net them offshore.  By the time they had them netted at sea, only two dolphins remained.  The fishermen did not seem to be interested in reforming and chasing the fleeing dolphins.  They were very content with the two they had in the nets.  At one point ten divers were in the water.  Finally after several hours, the two dolphins were loaded into the skiffs on their bellies and brought into the harbor pins kicking the entire way.

It struck me odd, that this much work went into catching just two dolphins.  In the past the hunters have given up on pods of 30-40 dolphins within yards of the mouth of the Cove.  Almost as if they were annoyed that it was taking so much effort to get them into the killing Cove. Just a few weeks ago, we witnessed the hunters spend almost an hour trying to push 2 striped dolphins under the tarps, only to give up and let them go.  So why did they not just let these two go?  Why spend hours netting them, putting 10 divers into the water?  They had nine banger boats and 4 skiffs running in and out of the harbor.  This was a huge operation for just two dolphins.

You see, it really is pretty simple. They must use the argument that hunting dolphins for food is their tradition, and, since they have dolphins here already, they will just sell a few for captivity.  Selling live dolphins is not any tradition, so the argument is made that hunting and eating is.  If you remove the live dolphin trade from the equation, you will likely end the hunt.  There is no money in eating dolphins, and there is no tradition in selling them, so to be able to sell live dolphins, they have to keep the people of Japan interested in eating dolphin meat.

So sad that these 30 or so men can swindle their own countrymen into eating toxic meat, so they can thrive financially by selling the souls of these dolphins to the highest bidder.

Don’t buy a ticket, and these hunters go back to being Bonita/tuna fishermen, which is a very long and noble (and true) tradition in Japan.