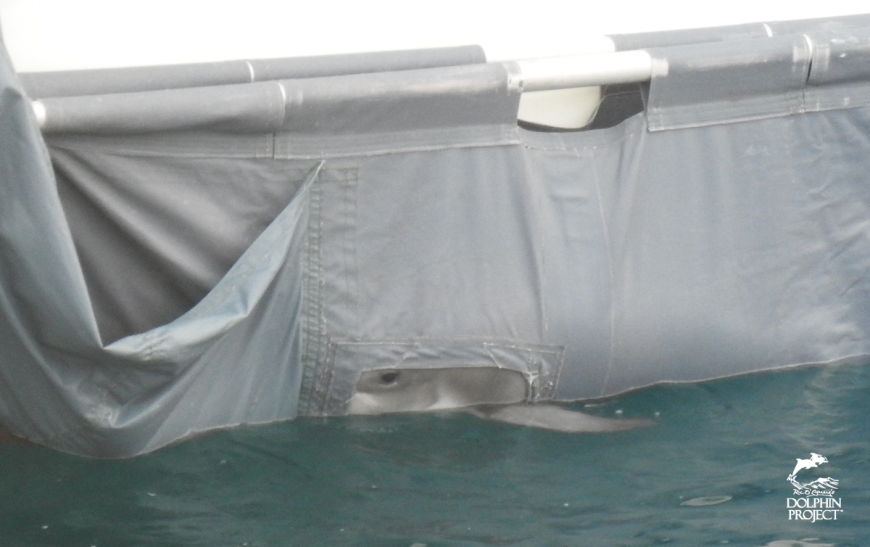 Tragedy struck again in Taiji on February 14 when the hunters captured a nursery pod of 10 Risso’s dolphins. Four of them were small calves. The mothers in a nursery pod will guide their calves to inshore waters to forage, play, and nurse their young, but above all, to protect dependent offspring from predators. According to their previous experiences, the inshore, shallow waters provide much-needed protection for their vulnerable calves. But not so in Taiji. There, swimming and foraging close to shore puts dolphins at great risk, and when the hunters spread across the ocean at daybreak, they quickly found the pod. With their fleet of motorized boats, they effortlessly chased the nursery pod down and forced it into the Cove. The hunters quickly netted off the dolphins’ escape, and their fate was sealed.

Science has established that cetaceans are highly complex, empathetic, and intelligent beings that share strong social ties. Mothers that have lost their offspring have been seen carrying their dead calves for days, refusing to let them go. It is evident that dolphins experience grief and that they mourn the loss of an offspring. 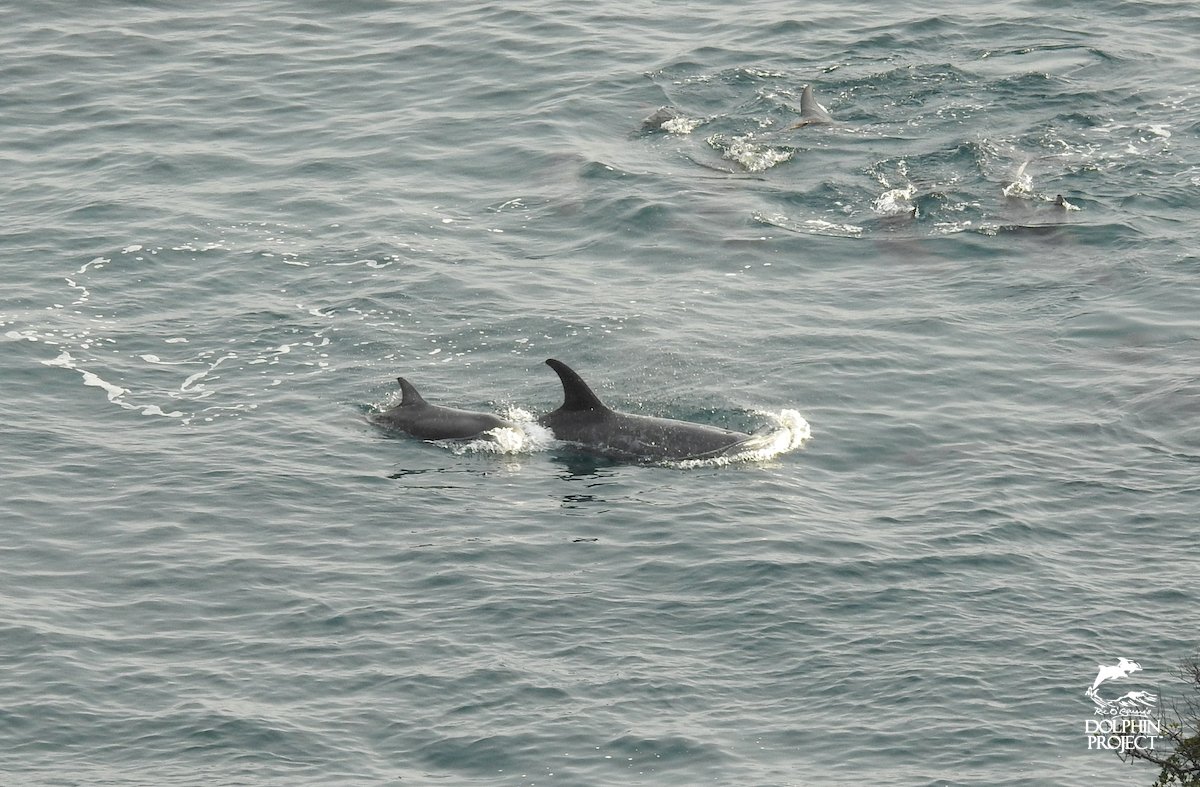 Risso’s mom and calf after being driven into the Cove, Taiji, Japan. Credit: DolphinProject.com

Risso’s dolphins have a cohesive social structure, and individuals remain together for long periods of time. The bond between a mother and her calf is particularly strong. The mother will care for, defend, and protect her calf by keeping it close to her side, and a calf will stay with its mother for several years. Calves that are still nursing require intensive maternal care. They cannot survive without their mothers.

The Risso’s dolphins trapped in the Cove no doubt knew that something was terribly wrong. The mothers would do everything they could to protect their offspring from harm, but once trapped in the Cove, all hope of escape is gone. These would be their last moments together.

Meanwhile, the hunters had pulled out the tarps at the killing beach to conceal the carnage. The scenes that followed were hideous. A calf got entangled in the net, its small body struggling to free itself from the orange mesh. An adult dolphin that also became entangled when trying to escape was helplessly trapped underwater, and after a long fight, it suffocated to death. A diver and several hunters working from a skiff pulled its lifeless body out of the water. That dolphin’s last moments were filled with agony and sheer panic. 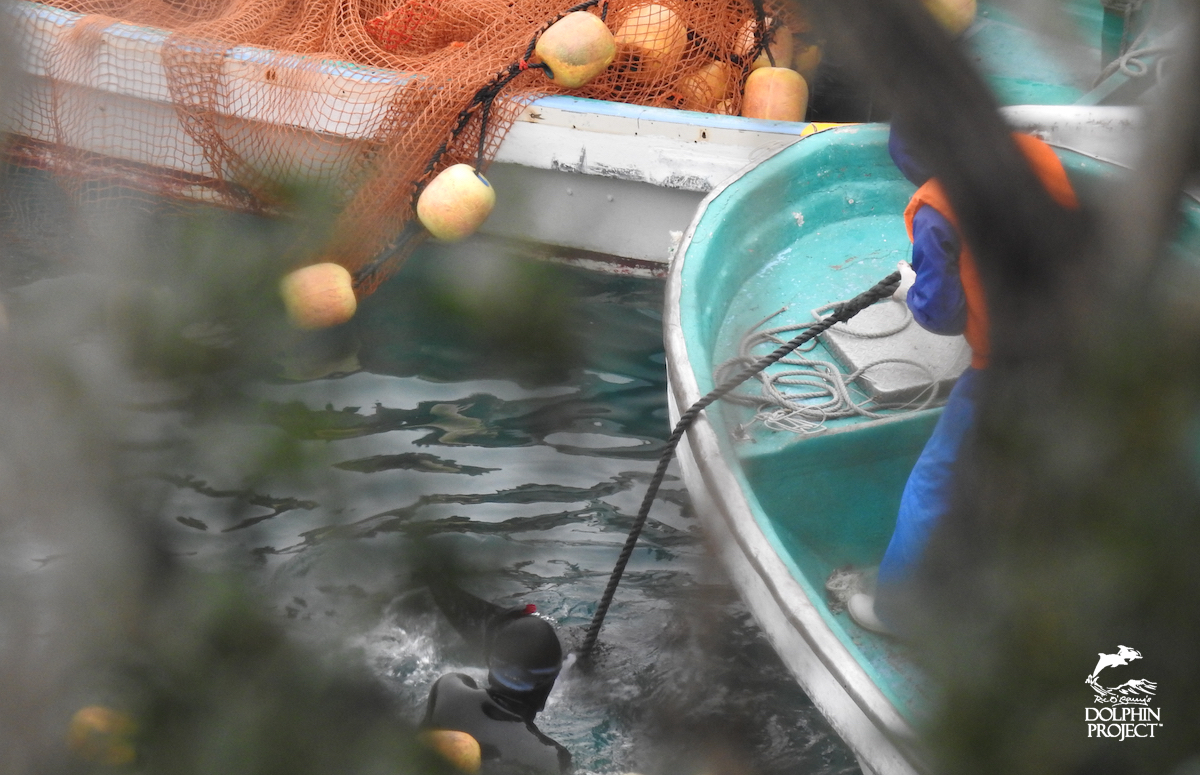 Risso’s dolphin being dragged underneath the tarps for slaughter, Taiji, Japan. Credit: DolphinProject.com

The hunters killed all the adults in the pod. When the massacre was over, they piled the dead bodies onto a skiff and dragged them to the butcher house. Imagine how the calves felt when they watched their mothers forcefully taken from them and dragged ashore, tied down, and killed. The calves were now left to fend for themselves against the hunters’ vicious assaults. They never had a chance.

On many occasions, we have seen dolphin trainers show up at the Cove during a dolphin capture such as this one. They have taken 24 Risso’s dolphins captive this season so far, and several of them were juveniles. This time, however, the trainers at Taiji Whale Museum and Dolphin Base apparently had no interest in selecting any of them. Perhaps they figured it wouldn’t be worth the hassle: These calves would be too young and too small to survive captivity for very long. Whenever dolphins are deemed undesirable for public display, the trainers let the hunters do with them whatever they want. We never see trainers at the Cove trying to help any dolphins.

Before long, another skiff with hunters entered the Cove. This one had four slings attached to it. Then we knew what kind of death the hunters had planned for the orphaned calves: They were going to dump them out at sea because the calves were too small to yield meat. Unwilling to let the calves count toward their quota, the hunters would tow them into the ocean and leave them to die there. 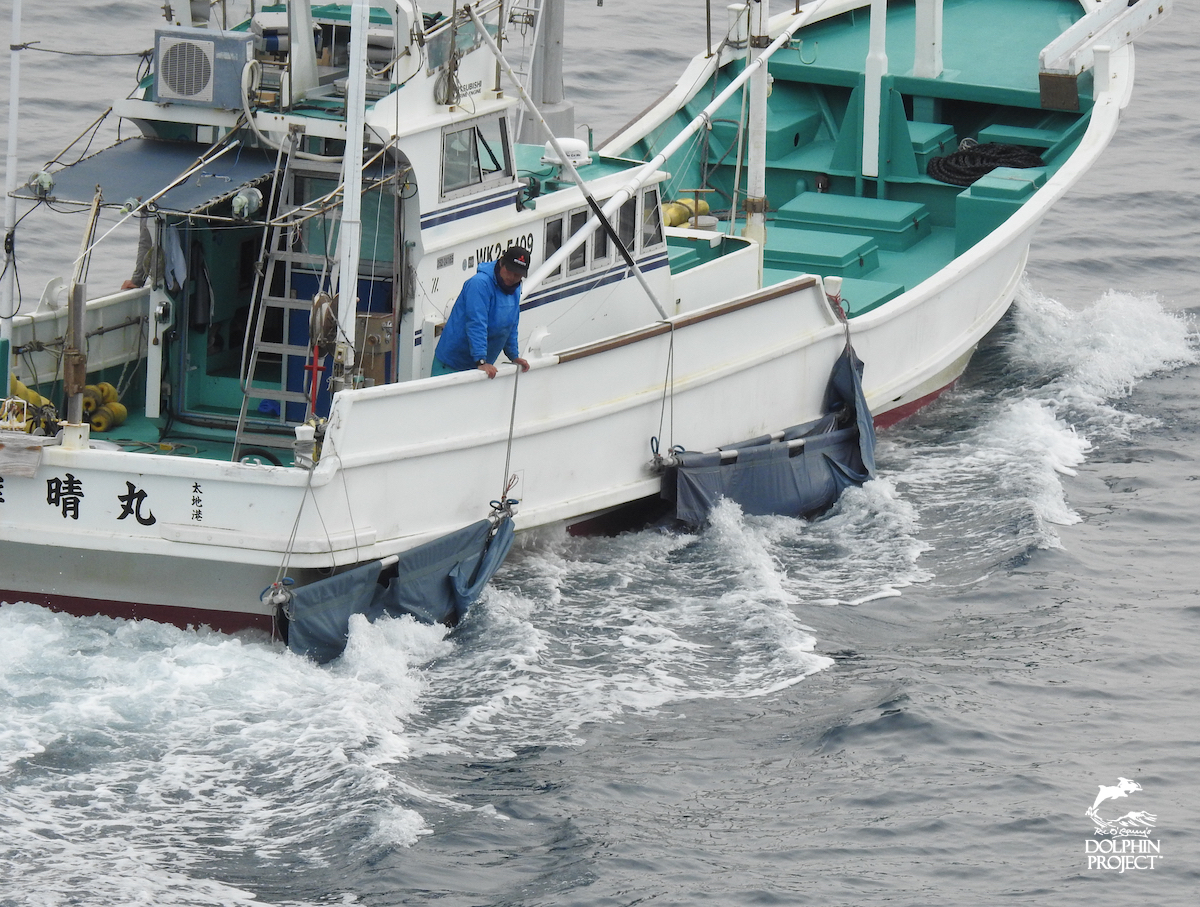 The waves crashing down on the slings violently pounded the calves as the banger boat rushed toward the open sea. At times parts of the slings were submerged in water, which would make it impossible for the calves to breathe. Some of these calves might have drowned or succumbed to shock on the way out. Imagine the horror they felt throughout this day. Watching their mothers being dragged ashore and killed. Being manhandled and wrestled into slings that were attached near the ear-deafening sound of a motor. Being hauled through the water at a fast speed, not knowing what was happening or when it would ever end. A tiny calf was looking out through a hole in the sling. There was so much fear behind that eye.

It is difficult to witness such cruelty and not be able to stop it. The law protects the hunters. During the hunt, Cove Monitors are surrounded by the coast guard and the police who make sure that no one interferes with what happens in the Cove. The banger boat raced farther and farther away from the Cove where the calves had last seen their mothers alive. 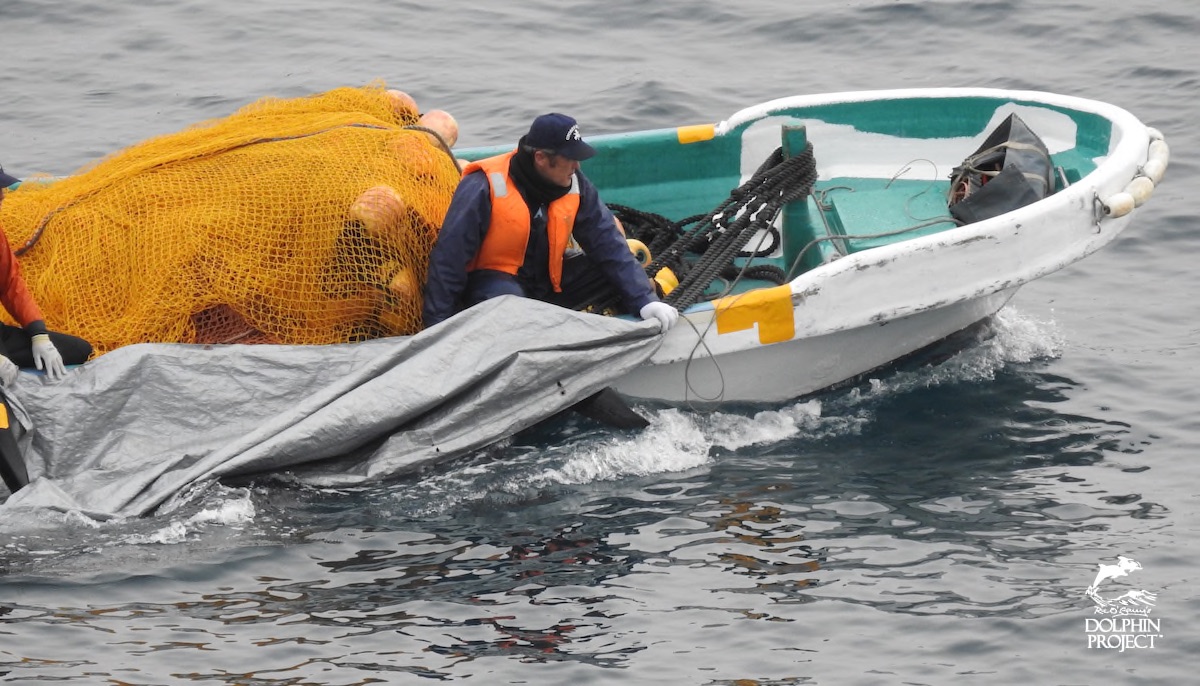 The hunters dumped them into the ocean’s waves. They left them there and returned to the harbor.

What took place in the Cove on Valentine’s Day is cruelty in its most crude and heartless form. Nothing can justify it. Four small dependent calves were helplessly lost out at sea. They could easily have sustained injuries as a result of the brutal treatment they endured. The hunters dumped them there without even the slightest chance of survival.

These calves no doubt suffered frightening deaths. The hunters tore their mothers away from them, killed them, and reduced them to chunks of meat on the cold concrete floor of the butcher house. When night fell and darkness descended, the orphaned calves on the ocean’s surface were fully aware that there is no comfort or protection to be found anywhere. Their mothers were gone. 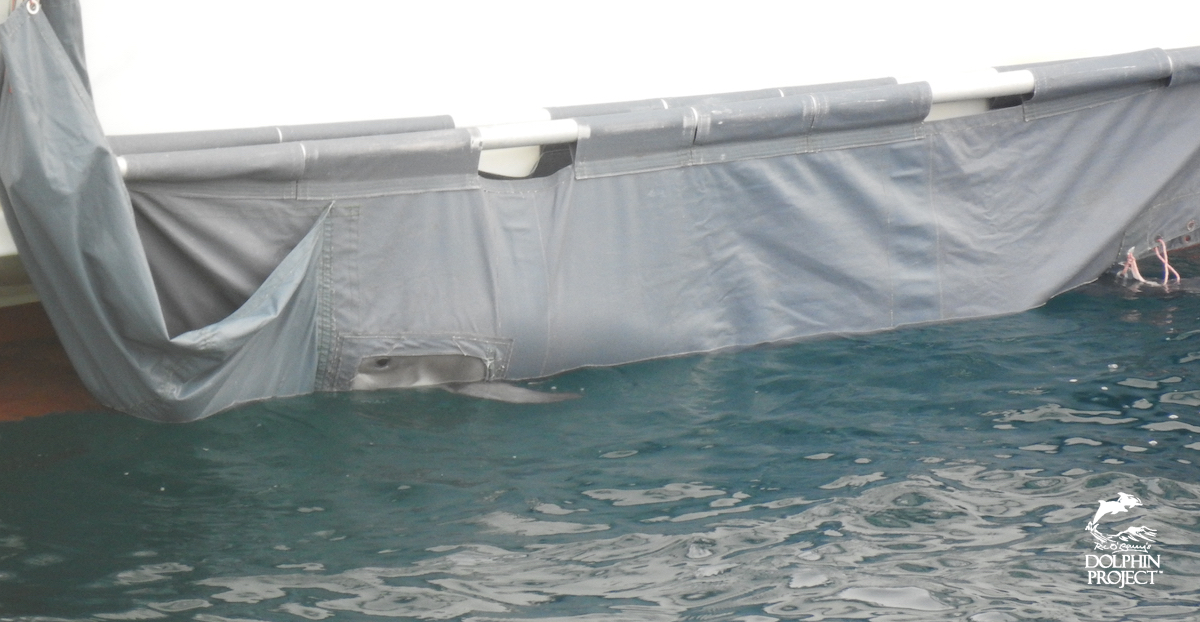