Open Letter to the Government of Mexico 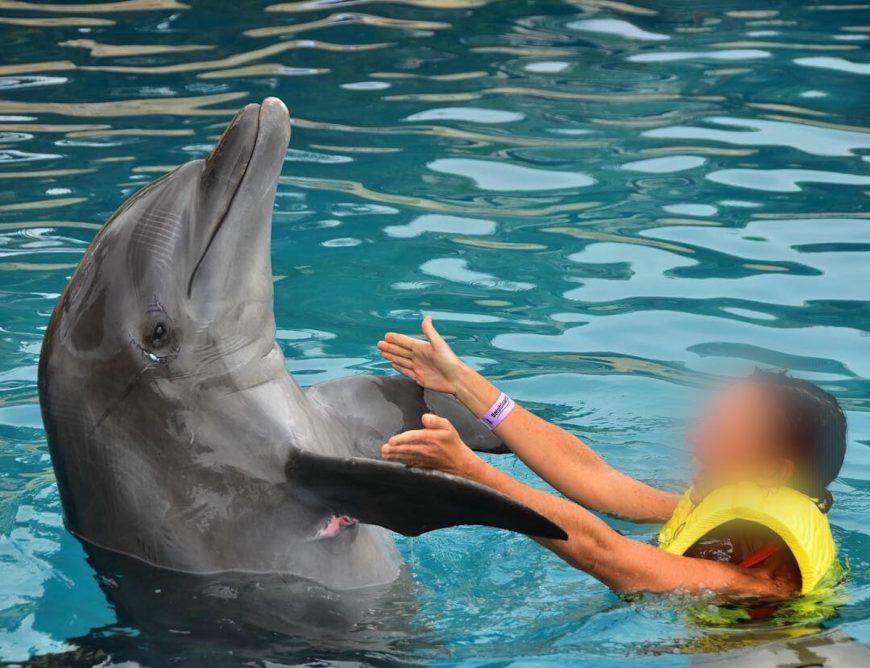 Empty the Tanks has been investigating the dolphin captivity industry within Mexico since 2017, and we have learned disturbing information, including allegations from people within the industry. We have submitted appeals and filed complaints to the PROFEPA and SEMARNAT offices on numerous occasions, yet we have been met with delays, excuses, or simply no reply at all. PROFEPA and SEMARNAT are the departments within Mexico’s government charged with overseeing the dolphinariums. Due to the lack of oversight and monitoring of the facilities under their direct supervision, we are now writing this letter in order to publicly address this distressing situation.

A concerning number of dolphin deaths

It was important to us to outline the disturbing number of dolphin deaths that are taking place inside the captive facilities in Mexico. We requested data from SEMARNAT about marine mammal deaths within captive facilities in Mexico and received only a partial list. The incomplete list states that at least 54 dolphins died between 2007-2017. The actual number of dolphins that died in captivity in Mexico is clearly higher, because the data we received was incomplete according to their staff. We are very concerned with the fact that their offices do not have a full accounting of dolphin deaths from the facilities they are charged with overseeing. The SEMARNAT representative we spoke with informed us that there was no information on record for 2018 or 2019. Our organization has received news of several deaths that took place during those years, and yet neither SEMARNAT nor PROFEPA have that information on file. According to a SEMARNAT staff member, the companies operating as Dolphin Discovery and Dolphinaris are exempt from providing information about dolphin deaths due to a confidentiality agreement the government has with them. We have requested an explanation as to why they are exempt. If those companies are serving the public on a daily basis and placing families and children into the water with wild animals, their information should be available to everyone.

From the partial data that we did receive from their offices, we concluded that captive dolphins are dying in Mexico’s captive facilities from pneumonia, septic shock, fungal infection, choking, heart attacks, chronic stress, cancer, organ failure, drowning, bladder ruptures, toxicity to medicine, and blunt force trauma. Sources from within the industry have also come forward with distressing accounts about the health of dolphins in the various facilities. We have been told by those working at these facilities that dolphins have extreme lung and eye issues due to the harsh sun and chemicals they are exposed to in their tanks. We have also been told that most of the dolphins have problems with their internal organs because of the medications they are given on a daily basis. 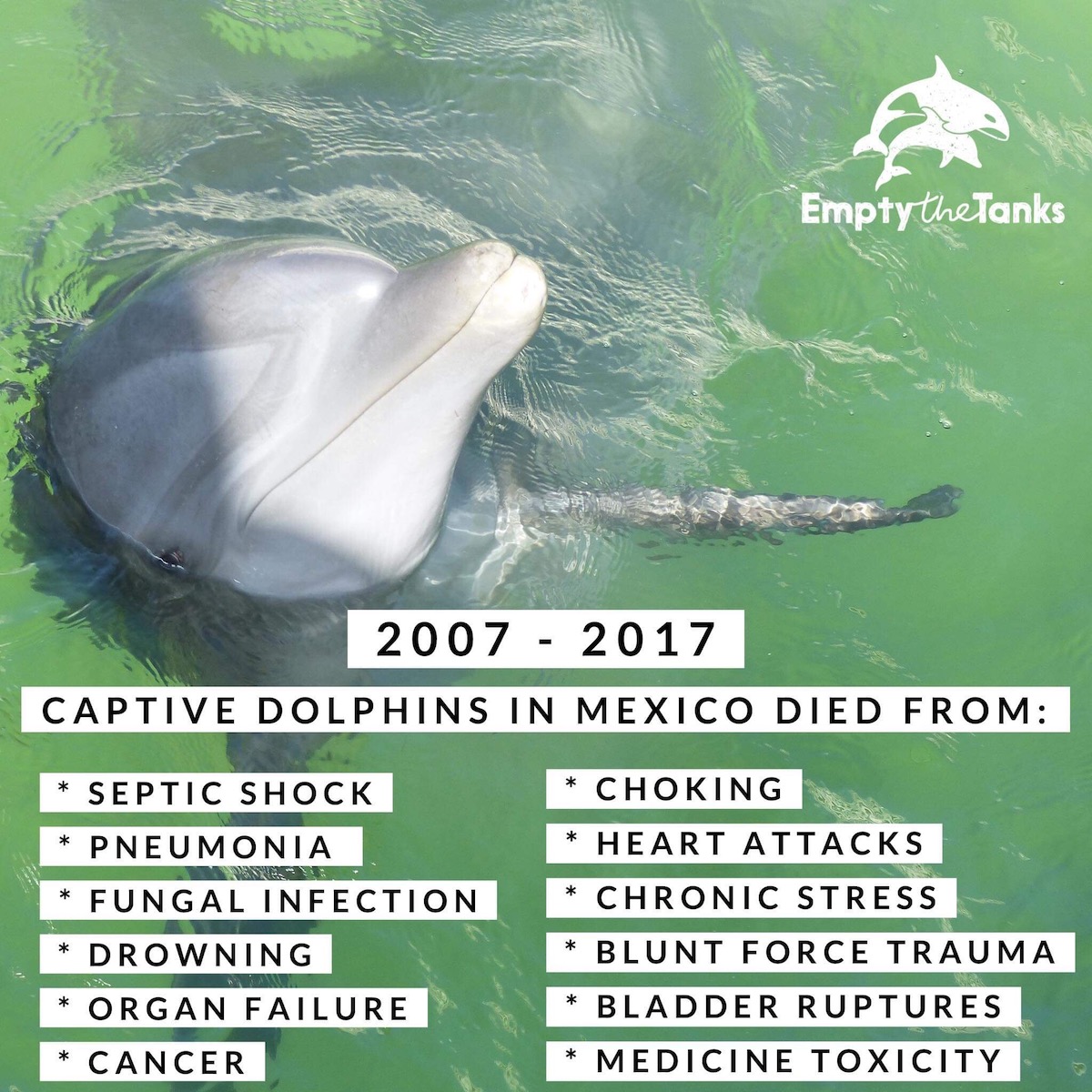 Dolphins in Mexico’s captive facilities are dying from a variety of disturbing conditions. Credit: Empty the Tanks

SEMARNAT and PROFEPA are trusted with monitoring these facilities, yet these extreme health issues and dolphin deaths continue without repercussions to those charged with the daily care of these animals.

In our open letter we also submitted evidence of violations of the laws under the NOM-135. This is Mexico’s standard for keeping marine mammals in captivity.

Some of the issues we brought to their attention in our letter are as follows:

7.7.7.6 The number of visitors for each dolphin participating in a Dolphin Swim (NCD) program must not exceed 10 individuals for 30 minutes and 8 individuals for 45 minutes. Sources from within Mexico’s captivity industry informed Empty the Tanks that the limits for how many guests may interact with a dolphin per swim program are often exceeded during the high tourist season. According to our sources, when large groups arrive, or cruise ships dock, the managers will nearly double the work for each dolphin and inform the trainers to falsify the reports afterwards. Our sources explained how false figures are intentionally recorded so when PROFEPA does visit, the paperwork appears to show no wrongdoing. We have asked their agencies to investigate these allegations but those requests have been ignored.

14.8 Drugs (tranquilizers) will not be used to facilitate, allow or provide visitors with an exhibition, swimming with dolphins or handling animals.
Empty the Tanks was alerted by another facility employee that during the busy tourist season, the dolphins become aggressive and frustrated due to excessive visitor interaction. The managers of the facilities reportedly deal with this issue by giving the dolphins valium, which is a drug to tranquilize them. This serious allegation must be investigated by PROFEPA and SEMARNAT.

4.3.1.2 Temporary facilities that are smaller in size than those stipulated in this Standard may be used temporarily for training, acclimatization, separation, transfer or transportation and parenting purposes. If the maintenance in these facilities is for transport, the period cannot be longer than 1 week. If it is for training, separation or parenting purposes, it cannot last more than 2 weeks and the extension of the period must be justified by the veterinarian in charge.
Our team documented a mother and calf being kept in a temporary pen for over 5 months at Dolphinaris Cozumel. We filed multiple complaints and have requested an investigation into this situation. 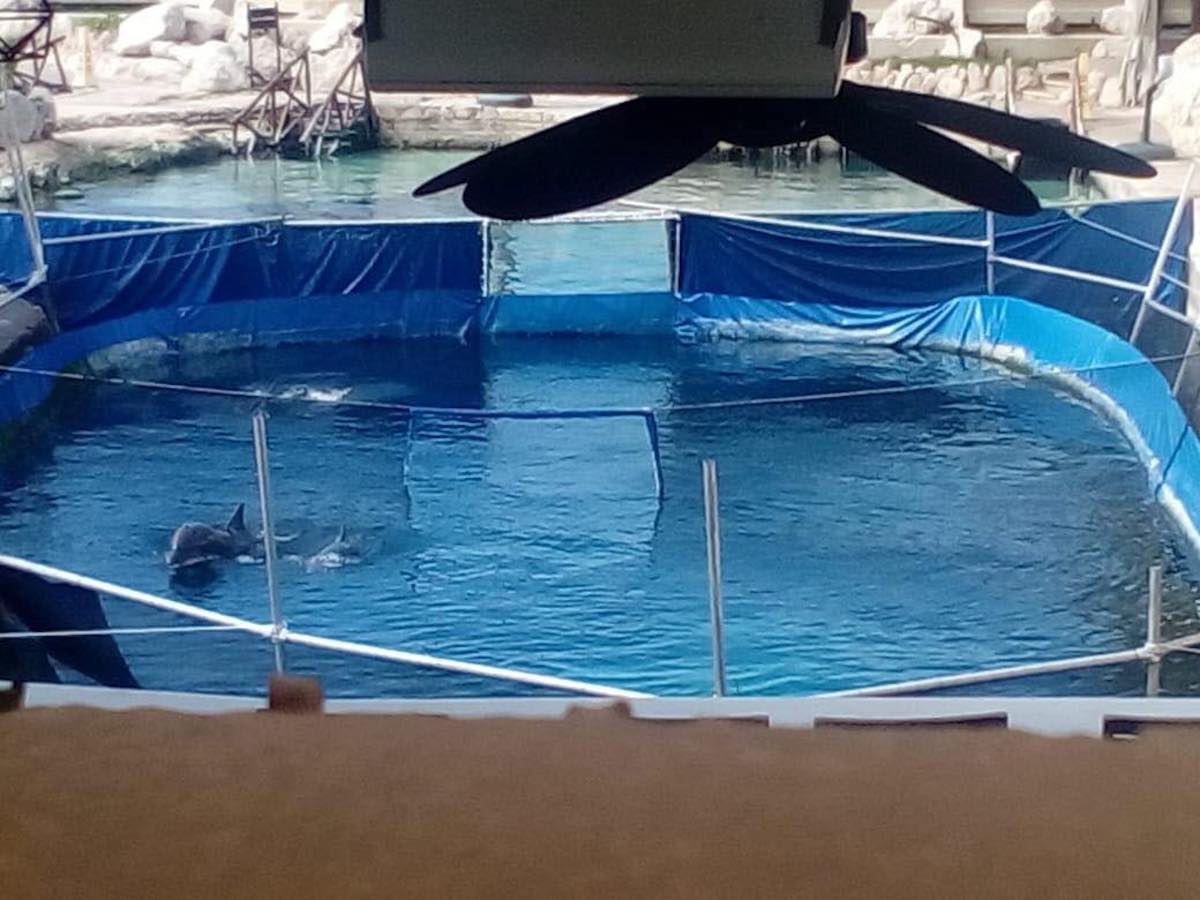 A mother and calf pair have been kept in this small temporary area for over five months in violation to NOM-135. Location: Dolphinaris Cozemul Credit: Empty the Tanks

As is clear from these allegations, there are many concerning issues taking place at the captive dolphin facilities within Mexico. Empty the Tanks has written to PROFEPA and SEMARNAT on multiple occasions to express our deep concern about how these facilities are being managed, as well as how the agencies are failing to oversee the law. PROFEPA’s mission is to “Seek environmental justice through the strict enforcement of the Law, banishing impunity, corruption, indolence and lack of authority, and involving all sectors of society and the three levels of Government in this fight, under the most pure principles of fairness and justice.” We urge Mexico’s environmental agencies to uphold this mission and investigate the allegations and complaints being made against the captive dolphin facilities throughout Mexico. We implore them to take into consideration that both current and former employees of this industry are contacting Empty the Tanks in the hopes that we can help them, because they are concerned for the welfare of the dolphins. Empty the Tanks is hoping this public letter receives a prompt reply from both SEMARNAT and PROFEPA.

Read the full open letter HERE (letter opens in PDF format in new window). This letter was translated into Spanish before being emailed to the government and media.

Featured image: A dolphin with an injury to the area caudal to the pectoral fin and covered in rake marks is forced to interact with tourists at the Dolphinaris Barceló location. Credit: Empty the Tanks