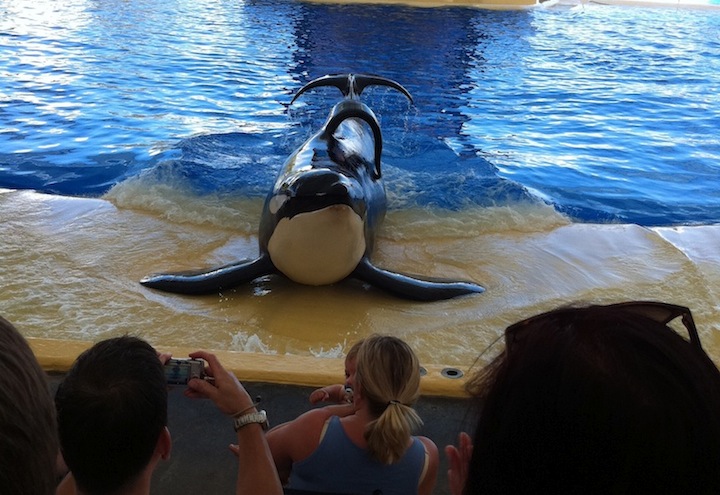 The International Marine Animal Trainer’s Association Conference concluded October 2nd, in the Bahamas, and it offered a terrific opportunity to evaluate the organization’s mindset and plans for the future.

We know that captive organizations are tightly bound together. IMATA and the AMMPA (Alliance of Marine Mammal Parks and Aquariums) for example, collaborate via its Friends of IMATA Vendors. Yet, oddly, they both offer differing opinions on the Japanese dolphin drives.

IMATA writes that it opposes the dolphin drives but, “a caregiver is welcomed by IMATA even if s/he participates in the selection and collection of live animals.” The AMMPA states that it is time to for the drives to come to an end, as it pledges breeding help to members of the Japanese Association of Zoos and Aquariums. It also adds,

Alliance members do not support, fund, or acquire animals from the Japanese drive fisheries. Not one animal in an Alliance member facility or interactive program is from Japan. They must have forgotten about Kina, the false killer whale captured through a drive in Ito, Japan (see here p.107) and recently transferred to Sea Life Park in Hawaii. Yes, the park is an AMMPA member.

According to Ocean Park Hong Kong’s inventory at Ceta-Base.org, Kina was captured in 1987 and was sent to the park on April 24, 1987. From there, she transferred to the U.S. Navy in Nov. of the same year, and finally to The Hawai’i Institute of Marine Biology in 1993. This past August, citing an expenses challenge, the institute transferred Kina to Sea Life Park. According to Ceta-Base records, Kina was in a second group of false killer whales captured. This paper by Reeves et al, (p. 117) discusses how she and a male were donated to the Navy. Kina is the last surviving drive animal in the US.

But back to the IMATA Conference which displayed an interesting menu. Attendees could swim free of charge with dolphins at the host venue — Atlantis Dolphin Cay, learn how to train an Amazon River dolphin and acknowledge that it was time to, “face the happy smile of our animals.” Wait, isn’t that anthropomorphism?

The hearty schedule attacked both activists and credible science. One of IMATA’s primary speakers was Dr. Kelly Jaakkola, the Director of Research at the Dolphin Research Center in Florida. We don’t think she likes us too well. Ms. Jaakkola’s presentations included:

“How Do You Fight the Claim that Dolphins are “Forced to Work All Day”?…With Data!”

But the real doozy was reserved for mid-week and this “special” presentation with Dr. Grey Stafford:

That’s a bold statement for a paper that was “peer-reviewed.” Furthermore, they accused Jett and Ventre of inappropriately handling data to form “invalid comparisons” and “unsupported conclusions.” Jaakkola and Stafford even added that they would use Jett and Ventre’s paper, to, “contrast this work to the results of another recently published paper,” — yep, their own.

The fact that a special IMATA session was convened to criticize Jett-Ventre is an indicator of a corporation working overtime to muddy the waters on this topic. This is analogous to what Big Tobacco did with cigarettes, what Big Oil is doing with climate change science, and what companies like Monsanto are doing with the science behind GMO’s. The technique is to create doubt and then use financial resources to shape the politics.

A good thing about science is, in the end, the facts and methods matter. Unfortunately in this case the “muddied waters” prolong the misery of SeaWorld’s captive performers.

In regard to their survival piece as well as their critique letter, both are confusing and demonstrate a general lack of understanding of the survival topic, but especially with the Kaplan Meier method.The conclusion of their work, that “Shamu’s survival” is equal to or better than a specific population of wild whales should be restated:

“Over the past 15 years our captive ‘assets’ are doing nearly as well as the most threatened killer whale population on Earth.”

Whatever IMATA’s motive, it was astonishing to learn that they — and even Dr. Jaakkola, had teamed up with the attack-dog website, Awesome Ocean. Dr. Jaakkola has held Live Q&A’s with them on several occasions. But IMATA’s President gushing with approval over their attendance at this year’s conference?

This year for the first time we have representatives from the social media realm. Eric Davis and Erin McKinney are here representing the website Awesome Ocean. Awesome Ocean is supportive of IMATA’s mission and will spend the week seeing, in person, how we share information with each other. They will be strategically placed as they cover some of our conference events. We are excited to have them with us, and encourage members to welcome them and make time get to know them.

Hope you placed them well IMATA. There is a lawyer looking to serve them with a lawsuit.