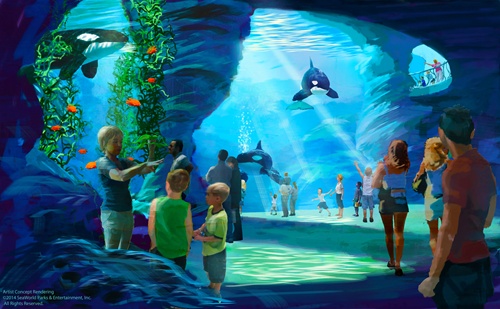 Noaki Schwartz, a spokeswoman for the agency, said they had received more than 120,000 emails and thousands of letters in opposition to the project. An unprecedented amount in the entire history of the CCC. Despite the outcry however, and the CCC’s recommendation to approve the project, it appears that SeaWorld Entertainment Inc., isn’t leaving anything to chance.

Earlier this week, an article that appeared on ‘The Dodo‘, suggested that SeaWorld was bribing people for signatures in support of its project. A photograph, which the writer claims a, “truthful source” captured, appears to show a SeaWorld booth where a ‘yes’ vote nets you a free drink. The marine park, the writer named ‘KimberlyRules’ alleges, is, “actually giving free drinks to people who sign the petition and letting little five year old’s sign.”

On the back of this, an email from SeaWorld, about the Blue World project, began to appear in peoples’ inboxes. Penned from Corrine Brindley at SeaWorld San Diego, the letter states that SeaWorld will be, “chartering a bus for supporters”, and asks if you will join them. In return, and to “express their thanks”, Ms. Brindley adds:

Supporters who attend the hearing, will be invited, along with a guest, to an exclusive behind-the-scenes tour of Blue World before it opens to the public. Email sent out by SeaWorld.

Naturally, SeaWorld’s shenanigans are not sitting well with advocates, the majority of whom signed petitions against the aquarium’s project because they truly do oppose it. One would have to examine local state law to discover if SeaWorld’s approach is illegal or not. Still, most people appear to agree on one issue — having to offer perks for support, smacks of something shady.

Twitter users respond angrily to an email dispatched by SeaWorld.

The CCC will vote to approve or deny SeaWorld’s permit on October 8th in Long Beach, Ca.