Op Ed: A Departure from Reality 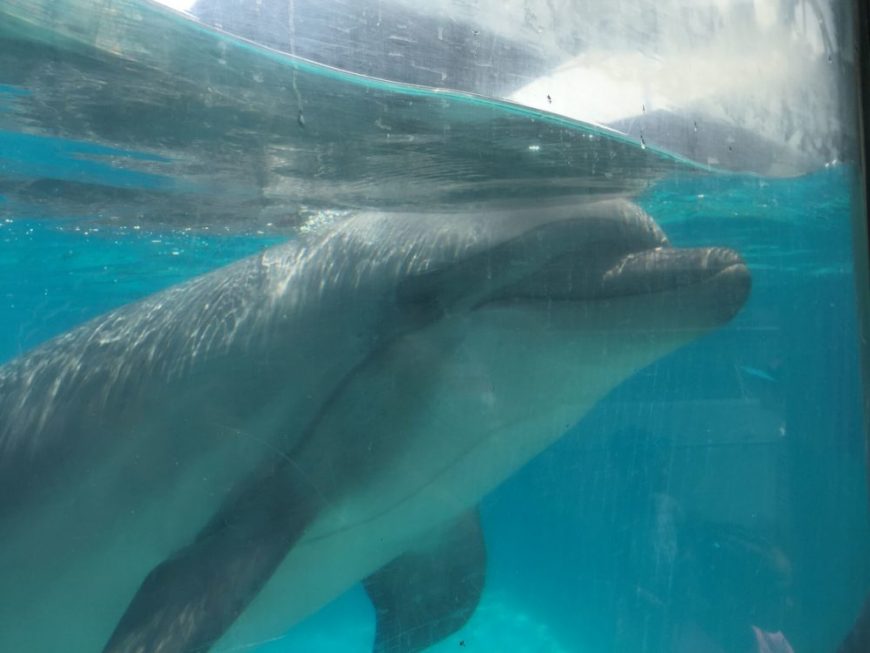 Not too long ago I sat in the stands of a well-known aquarium during the dolphin show. The sky was overcast, and a chill breeze settled over the water as the mammals prepared to take center stage.

The dolphins’ anticipation wasn’t a result of their love for show business. Rather, the learned routines represented food: perform a trick and get a food reward. In that regard, I felt a little bit sorry for the trainers as they were in fact, the ones being trained. Stupid for them to think otherwise.

A woman in her early 20’s opened the show by discussing the wonders of wild dolphins. She mentioned how dolphins echolocate their prey, how dolphins can swim miles, in straight lines in the open water, and even went as far as mentioning “…how awesome it is to see superpods of dolphins from cruise ships.”

While my gaze lingered on the four poor souls waiting for their musical cues, I confirmed then and there what I had always believed: in order for visitors to “buy into” dolphin shows, they needed to take a departure from reality. And here’s why:

What you see and what you hear are incongruent. You can’t simultaneously have a free-roaming creature swimming miles in the open ocean and that same animal swimming in endless circles in a man-made tank. You can’t have a dolphin echolocating to source its prey while being fed dead fish chunks because a) the mammals are in an artificial environment where there are no live fish and b) echolocation doesn’t work properly against glass/plexiglas panels. However, what can and does happen is people start to see what they hear. Thus, the lines of reality blur.

The dolphin show experience could be loosely compared to brainwashing.

So how does one separate their senses so each function individually, without the influence of the other? That’s tricky. According to an article in The Boston Globe, science would suggest that such connections among the senses are deeply rooted, where the senses “…are enhancing, competing with, and even altering one another in surprising ways.”*
*Source: The Boston Globe, 12/11/11

Perhaps the best way to, pardon the pun, “see” the aquarium and marine park industry for what it is – a well-oiled machine where animals are expendable and malleable assets, designed to plump up corporate revenues – would be to employ some critical thinking skills. Without listening to the dolphin show soundtrack, what would your vision convey? Without seeing the animals in the tank, what would your hearing reveal? Next, compare the two results. If they are in blatant conflict, it’s likely you are being deceived, where both time and money are being siphoned in exchange for a disingenuous experience.

Cruelly, the dolphins don’t have a choice or escape route to buffer their ongoing torment, but we as consumers do. By stopping to take a moment’s “time out”, we can avoid making decisions that negatively impact financial, ethical and environmental wellness.