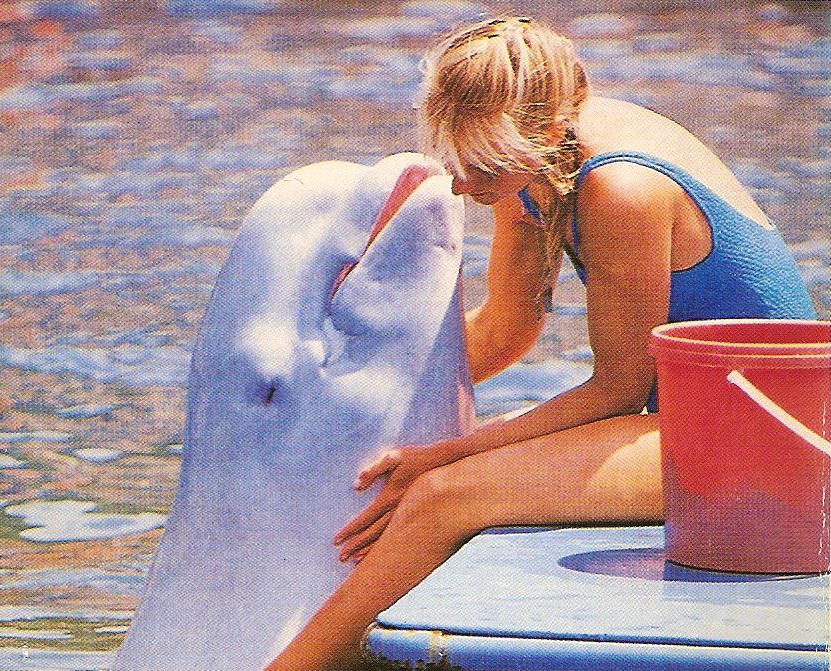 In September, 1991, a month before the Soviet Union would be officially dissolved, a severe storm battered the Russian military base, the Biotechnical Systems Institute, in Sevastopol, Crimea. The facility was home to several trained dolphins, sea lions and two belugas, all held in sea pens built in the port. The churning waves were powerful enough to tear a hole in the belugas’ fence and net enclosure, and both managed to slip out. The older of the two whales, Tichka, was the bolder of the two, making a dash into the night, while the younger whale, Igor, hesitated and stayed behind. 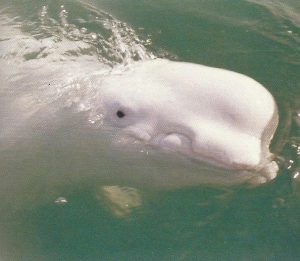 Aydin, or Tichka, showing the scar on his upper right lip. From A Farewell to Whales by Pierre Béland, photographer unknown; author’s scan.

Four years earlier, at approximately three years of age, Tichka was plucked from his wild pod. The whale was transported by helicopter to “Vitjaz Base” where he was given primary training throughout the summer. He was moved once again in September, flown to the TINRO Pacific Scientific Research Fisheries Center, Vladivostok. His last stop would be in May, 1991 when he was flown to the Biotechnical Systems Institute in Sevastopol. The Institute was headed by Lev Mukhametov, a researcher and prolific beluga dealer for local and international dolphinarium markets, with clientele as far away as Japan and Mexico. Years later, he would also be the same man in negotiations with the Georgia Aquarium, in their request for a shipment of eighteen belugas.

For the next four months, Tichka wandered the Black Sea, ending up near a harbor in Gerze, Turkey, on January 27, 1992. Lean and hungry, he approached the fishermen, begging for food. With the community deeply entrenched in fishing, the citizens were dumbstruck to see a cetacean – let alone a beluga – near their town. Due to his friendliness towards people and ability to perform basic tricks such as catching polo balls, Tichka became an overnight sensation. Schoolchildren flocked to see him, and he eagerly greeted divers and boats carrying curious out-of-towners, getting his fair share of handouts from even the most hardened fishermen. Over time, he was christened with a new name: Aydin (pronounced “Ay-den”), meaning ‘brightness’ in Turkish, given how his snow-white body stood out like a beacon against the Black Sea coastline. The town was steeped in such a beluga craze, their coat of arms was altered to include a beluga! 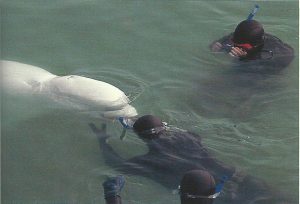 Aydin being fed by divers off the village of Gerze, Turkey. © Pierre Béland; author’s scan

Belugas are not native to the Black Sea, and thus, the question remained how the whale ended up at this small seaside village. It was concluded that Aydin had to be an oceanarium escapee. With both local and international media focusing on who this charming, but enigmatic beluga was, along with the Turkish government prodding for answers, the Russians refused to admit or deny having any connection to him. (A small ID card for Aydin, describing his place of capture and location of escape, would later find its way across the Turkish Ministry of Environment’s desk, confirming the suspicions of everyone involved.)

The Turkish Ministry of Environment invited two Canadians, world-renowned expert of belugas and senior research scientist of the St. Lawrence National Institute of Ecotoxicology, Pierre Béland and veterinary pathologist Dr. Sylvian De Guise, for their expertise and recommendations on Aydin’s situation. While taking oral swabs to check his health, they discovered how his teeth were “worn down to the gums, even more so farther on the upper jaw, a pattern not at all like the usual wearing of beluga teeth in the wild.” While the mystery remained unsolved, Emilio Nessi, an Italian children’s author and reporter for Toppilino magazine who tagged along with the Canadian experts, hypothesized the whale had been “trained as a saboteur and had his teeth filed so he could mouth large objects, such as magnetic mines, which, at the risk of his life, he could fix unto the hulls of enemy ships and submarines.” 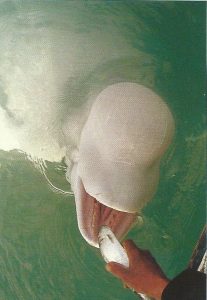 While his bloodwork returned with decent results, there was some serious concern over his solitary status. As a species, belugas are highly gregarious and stick tightly with their pods. Being alone could be detrimental for his psychological health and immune system. Nessi offered the idea of returning the beluga to the Bering Sea, where Aydin could be rehabilitated for an eventual release. Sylvia and Beland discouraged it, mainly out of concerns about securing funding as well as the potential hazard of his own friendliness towards humans. Aydin “risked being shot at by humans [in Siberia] who might not be as friendly as the beluga would expect.” In the end, the Canadian researchers recommended to the Turkish government “to leave the whale where it was.” In addition, Beland pointed out how Aydin’s presence inspired “a change of attitude toward whales in local communities.” He hoped in time “the harried dolphins and porpoises native to the Black Sea might be shared by the fishermen, if only for their tourism potential.”

The recommendations fell on deaf ears, as the Turkish government gave the Russian military an ultimatum to recapture their fugitive cetacean. The entire town of Gerze, along with hundreds of other Turkish citizens protested the motion, even holding demonstrations to leave Aydin alone and grant him asylum.

By early April, 1992, Mukhametov and the rest of Biotechnical Systems Institute crew arrived, traveling by research vessel and waving the Ukrainian flag. They were flanked by a Turkish gunboat, forcing the opposition to back off in defeat. After a few days of false leads, the vessel found Aydin on April 5 off Espiye, who swam alongside the ship and took the fish the trainers gave him as they sailed away from shore, coaxing the other whale to follow. Media outlets from around the world watched from afar as the “recapture” operation took place. 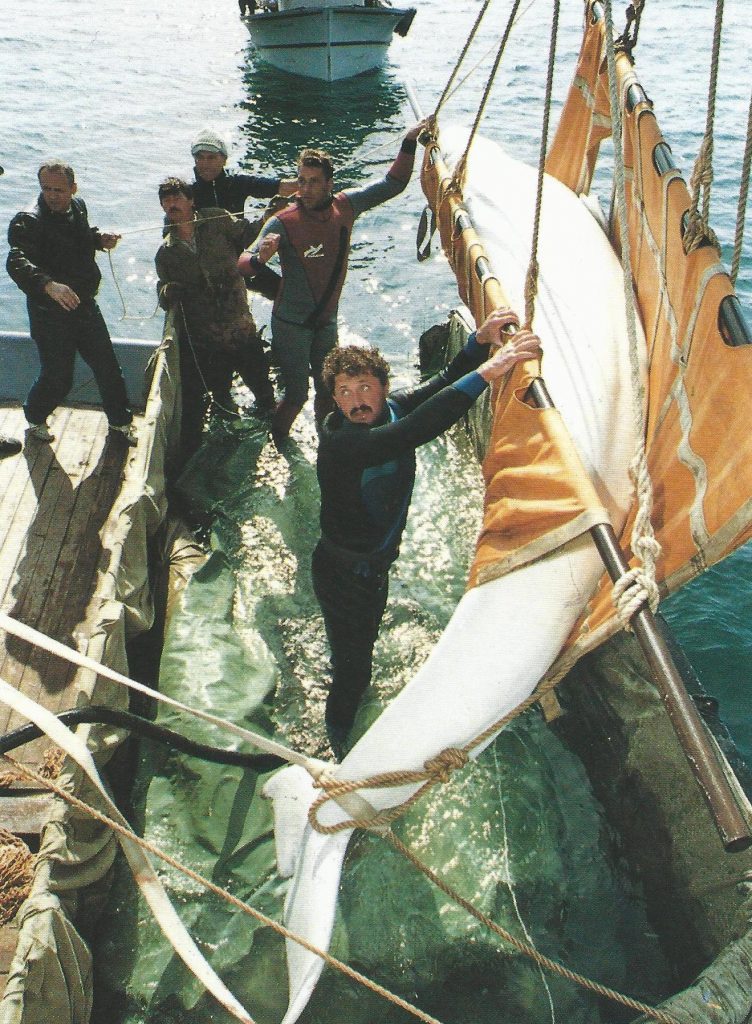 Aydin being hauled aboard. From Into the Blue by Virginia McKenna; © Daily Mail, author’s scan.

With a noose around his flukes and wrapped in a net by two divers, he struggled and fought for 45 minutes by the ship’s hull before he was guided into the stretcher and on board the boat. From there, he was back in the hands of the Russians. Responding to the incensed Turkish public, Mukhametov told reporters, “We know how much you love Aydin, but he will be more happy there with his wife Marsa.” (This whale named Marsa, however, did not exist.)

A month later, the Associated Press would catch wind of Aydin’s current whereabouts. Now performing under the stage name “Kirill” at a make-shift oceanarium in Lapsi, Ukraine, at least he wasn’t alone. His former Navy companion, Igor, kept him company, along with three bottlenose dolphins. But his future was bleak: the oceanarium was losing money due to the economic downturn following the Soviet Union’s collapse. With not enough visitors to generate a profit, and no government help to cover its expenses, the oceanarium was tight on cash flow. Hearing the news, Emilio Nessi attempted to make a deal with Mukhametov for Aydin’s freedom, to which the Russian chief of research would only agree so on the condition of a hefty payment of $60,000, the going rate at the time for a beluga in Japan. 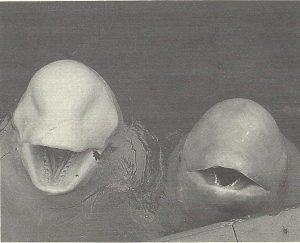 In November 1992, another severe storm truck, much like the year before, smashing the sea pen and sending Aydin out to sea once more. With the former-escapee now loose again, Mukhametov offered a 250,000-ruble ($3,500) reward for any information that could lead to his capture. In February, 1993, Aydin returned to Gerze, much to the delight of its people. This time, the Shedd Aquarium asked for permission from the Turkish government to take the friendly beluga to its facility, filing an import permit request to the National Marine Fisheries Service in hopes they could use him for their budding breeding program. Much to Gerze’s relief, it was denied.

As for Aydin, the Turkish Minister of Environment prohibited the recapture of the whale within Turkish waters. Throughout spring, the ex-military beluga spent his days with the divers who fed him and with tourists who came in droves to visit. On July 17, 1993, he would make his last appearance during a town festival. The next morning, like a ghost, he was gone.

In November 1994, there were sightings of the wayward whale by the Bulgarian coast, but these could not be confirmed.

The majority of this article’s information was sourced from A Farewell to Whales by Pierre Béland, Yalcin Ergir, and an April 1992 Associated Press new spot.

Featured image: Aydin with Alla Azovtseva, 1992/from “Snowball: Flight for Freedom”  by Emilio Nessi/CC BY 2.0.