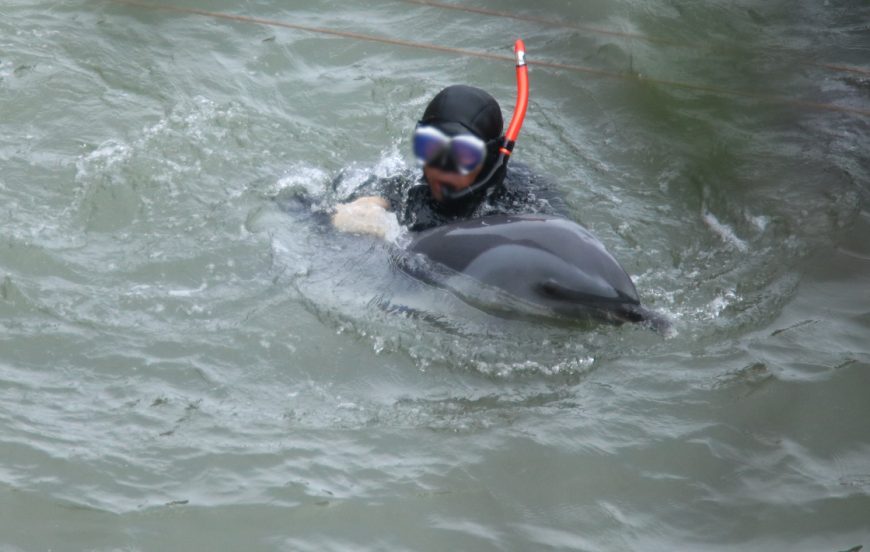 Taiji, 12-12-16: In the first drive of pantropical spotted dolphins of the 2016/17 season, one couldn’t help notice the white color of their rostrums, or beaks, as the dolphins swam tightly together in the cove. At least 70 mammals had been driven in, and while hunters took a break, the dolphins surfaced erratically, their dramatic coloring and stripes lending one reason as to why they were so valued in captivity. For even in their angst, they were beautiful and moved with grace.

It was difficult to look at them, and not think of the tens of millions of dolphins killed during purse seine tuna fishing in the eastern tropical Pacific ocean, as documented in the film “Where Have All the Dolphins Gone?” (1990). In one clip, a pantropical spotted dolphin was hoisted up, caught in a net by its rostrum as the oceanic catch was hauled by the massive trawler.

Skiffs filled with divers and trainers soon returned to the cove, and black shapes began to dot the water as the captive selection process got underway. The terrified dolphins tried to escape the chaos, hovering perilously close to the sharp volcanic rocks, which were covered with yellow tarps to avoid their injury.

In a macabre orchestra of sights and sounds, hands grabbed for select animals, flukes thrashed, and the squealing of dolphins were heard, along with the jarring shouts of humans. Dolphin Project Cove Monitors continued to live stream the violence of this process in both English and Japanese for the world to witness. And, one by one, the dolphins were overpowered by their captors, the most physically aesthetic animals chosen for “life” in captivity.

And they call this tradition? No tradition I have ever seen gets covered in tarps and hidden. This is shame, and money, and greed.” ~ Tim Burns, Dolphin Project Cove Coordinator and Monitor

Dolphins were loaded onto skiffs lined with tarps, with several trainers positioned alongside them, in attempts to protect their payday. A total of 18 mammals were wrangled from the pod, and boated to the nearby harbor pens, and Dolphin Base. Suddenly, one of the dolphins raised its tail, and appeared to roll onto its side as the water surrounding it began filling with blood. The dolphin was righted, a white-gloved hand dipping into the bloody water to assess the animal’s condition. It was obvious the dolphin was deteriorating, a result of the breathtaking brutality of the drive, and injuries sustained during captive selection.

Speaking of which, the amount of dolphins still trapped in the cove was highly concerning. A slaughter of this magnitude would be – gruesome. The skiffs returned once again, and hunters began removing the nets. The remaining dolphins would be set free! While this was good news, the motive was suspect. Were the dolphins being released because of the high number of trainers present? While this wouldn’t be known for certain, at least the animals wouldn’t be killed.

We waited…but the dolphins didn’t leave. Minutes ticked by, yet the pod began swimming towards the tarps, where they last saw their missing pod members. It was devastating to watch them willfully swim towards the scene of such cruelty. Eventually, skiffs and boats were able to turn the pod (approximately 52) back out towards open water, with the ominous sounds of hunters banging on poles filling the air as the dolphins swam out to sea.

I cannot describe my feelings. I guess I’m in shock and cannot digest what I saw and felt.” ~ Yoshi Iizumi, Japanese activist and Dolphin Project Cove Monitor

Remaining pod members are driven back out to sea, Taiji, Japan
Credit: DolphinProject.com

Back at the harbor pens, the newly-captive dolphins formed a tight ball as they faced a frightening reality. Seventeen mammals remained; one dolphin was missing. It’s safe to surmise that this one dolphin’s story began somewhere in a wild world, and ended violently in a skiff filled with its own blood.

Note: In 1980, the National Marine Fisheries Service (United States) listed the coastal stock of pantropical spotted dolphins as depleted under the Marine Mammal Protection Act. The offshore stock was listed as depleted in 1993.*
Source: NOAA Fisheries, Office of Protected Resources