One Dolphin’s Story – No Name 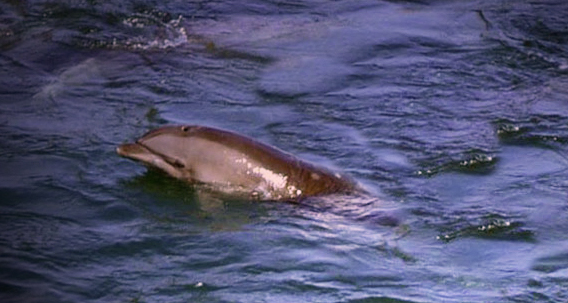 Every year from September 1 to March 1, a notoriously cruel hunt of some of the most sentient and sensitive creatures on the planet takes place in Taiji, Japan, made famous by the 2009 Academy award-winning movie “The Cove.” During this period, fisherman, or more appropriately, dolphin hunters, “drive” the mammals to their capture or deaths via means of physical violence and acoustic torture.

When a pod is located, “banger boats,” equipped with metal poles on their sides, begin to herd the dolphins via “banging” on the flange on the top of the poles with a hammer. This “banging” creates a sensory nightmare for the acoustically-sophisticated mammals, and, in an effort to protect the members of their pod, the panic-driven animals often become trapped, with no means of escape. At this point, the pod has nothing left to do – but wait. With no access to food or freedom, the dolphins become further emotionally and physically weakened. They wait – for the next phase of their nightmare which unimaginably, is even worse than what they have already endured.

The following is a re-creation of a typical dolphin drive, from the eyes of a baby dolphin.

We will call the baby “she” and “her,” as we never learned her name. And, even if we had, it would have been unlikely we could have pronounced it correctly, due to limitations in our ability to both create and detect high pitched sounds.”

During one, such drive, a baby bottlenose dolphin, not more than 1 year-old, was caught in a violent frenzy of sound and activity. Panicked, she desperately attempted to stay close to her mother, however, the dolphins around her were creating turbulence in the water, in their haste to escape. She began having difficulty reaching the surface to breathe, and was frequently separated from her mother, despite attempts to call her via her unique signature sound.

In the months leading up to this horror, her mother had always ensured she stayed nourished, with her supply of rich milk. She was fully adept at ingesting it, as her tongue formed a sort of straw shape, preventing her from swallowing salt water. Her mother, through repetition and patience, taught her how to swim and maneuver her streamlined body, so that she was eventually able to keep up with the rest of the pod without tiring too much. Still, she was young, and with a known life span of 40-50 years, she had time to learn and absorb more knowledge of the world around her.

Never in her life had she experienced such terror. While she didn’t understand what was now taking place – why the water was pulsing with the adrenaline-filled squeaks and whistles of her pod members, not to mention the hideous sounds which seemed to invade every cell in her body – instinctively, she knew she was in grave danger. For a moment, she felt the reassurance of her mother underneath her, attempting to lift her body towards the sky and the sun. She reached the surface, her blowhole snapping open, and then quickly shutting again, grateful for the breath of air, although it was tinged with something that burned her eyes and lungs. In that moment, she spotted many alien objects, virtually on top of the entire pod.

And then, a peculiar thing happened: she felt as if she were being pushed backwards, along with the rest of the pod. Somehow, whatever was causing such chaos seemed to influence their swimming direction. It didn’t feel natural, more as if they were swimming against their internal compass. As such, some of her pod attempted to fan out, away from the main group.

She needed guidance from her mother, whether they should continue swimming along this new course, or follow the other animals. But her mother seemed not to notice, focusing solely on ensuring her baby’s ability to reach the surface. And together they swam, mother and baby in constant contact, their pectoral fins touching often.

If this was even possible, the sounds seemed to grow even louder and soon she noticed the “rogue” pod members had returned to the main group. The water just ahead appeared slightly discolored, darkening as she glided through it. Via her superior senses, she was able to “taste” the water, and although this too was a new sensation, she reacted the same as the rest of the group, becoming even more panicked.

Aside from the inescapable, acoustic delirium, no doubt, being felt by each and every dolphin in the group, came new physical injuries, causing some of the mammals to bleed. They huddled closer together, attempting to protect the injured, with all pod members wary of straying far from one another.

And then – just like that – the banging stopped. The ocean calmed. The dolphins took this opportunity to recover, attempting to restore their strength and regulate their breathing. Many were injured, some bleeding more profusely than others. The baby nursed, her mother’s continued close proximity a soothing oasis amidst an unfamiliar and frightening environment. Shortly thereafter, the dolphins searched for an escape route, but quickly learned they were blocked from reaching open water.

Day turned into night, the hours passing slowly. The breathing of the most gravely injured become laborious. There was no food, there was no freedom. There was simply nothing to do but – wait.” 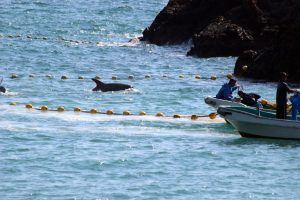 Sleep overtook many, but even as half their brains shut down for some desperately-needed rest, the feeling of panic ensued. There was no escaping the fact that “something” was yet to happen. Something ominous, of which, they would likely not survive.

The following morning, the weakened and terrified dolphins renewed their efforts to escape. A couple of older animals were notably missing, and presumed dead. Another full day and night went by, with the survivors remaining trapped in the cove.

On the third day of capture, in the wee hours of the morning, the baby drifted away in slumber from her weakened mother. When loud rumblings filled the water, she was jolted awake. Then, moments later, bodies filled the spaces directly beside her. As she bolted to look for her mother, something grabbed her tail, preventing her from moving. What happened next would forever taint her mind, for however left she had long to live. 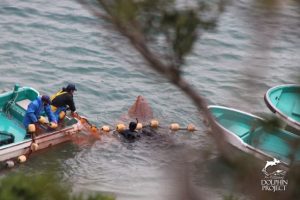 She was dragged backwards from the rest of her pod, who, by this time, were vocalizing in sheer hysteria. There were many bodies in the water, all grabbing at the dolphins, while another object seemed to run over a couple of the animals. She couldn’t see her mother but heard her whistle. Another body took hold of her rostrum, turning her this way and that so that she accidentally inhaled water when she tried to breathe. Suddenly she felt something rough underneath her as she was slid over a structure. Sensitive flesh bled as she was given a final push and let go. Immediately she swam towards her mother but promptly hit a barrier which, no matter how hard she tried, she could not swim through. Using her remaining bits of strength, she rammed the structure over and over, desperate to reunite with her pod. She listened for her mother’s whistle and a couple of times, thought she heard it, but was unsure as the other animals drowned out all distinguishing sounds.

She remained there, the baby who, if one looked closely, would have seen tiny, black spots on her rostrum, where her whiskers were at birth. She stayed as the dolphins became quieter, as individual after individual was silenced. She stayed as the water around her became tinged with pink, then a deeper shade of red as the family she had ever known was murdered. She stayed, waiting for her mother to re-appear.

Suddenly, in the distance, she heard the same rumblings she had heard earlier, with one object bearing down on her location. She was nearly run over, too weary to swim away. The object missed her. Two other objects passed her, one removing the barrier that had prevented the only family she had ever known from reaching open water. She swam in small, erratic circles, even once boldly entering the cove, still searching for her mother.

Eventually she drifted back into open water, bobbing in the calm surf. How much time had passed, she didn’t know. Perhaps it was hunger, or a sheer will to survive, that kept her afloat. She did know this: there was nothing left to wait for.