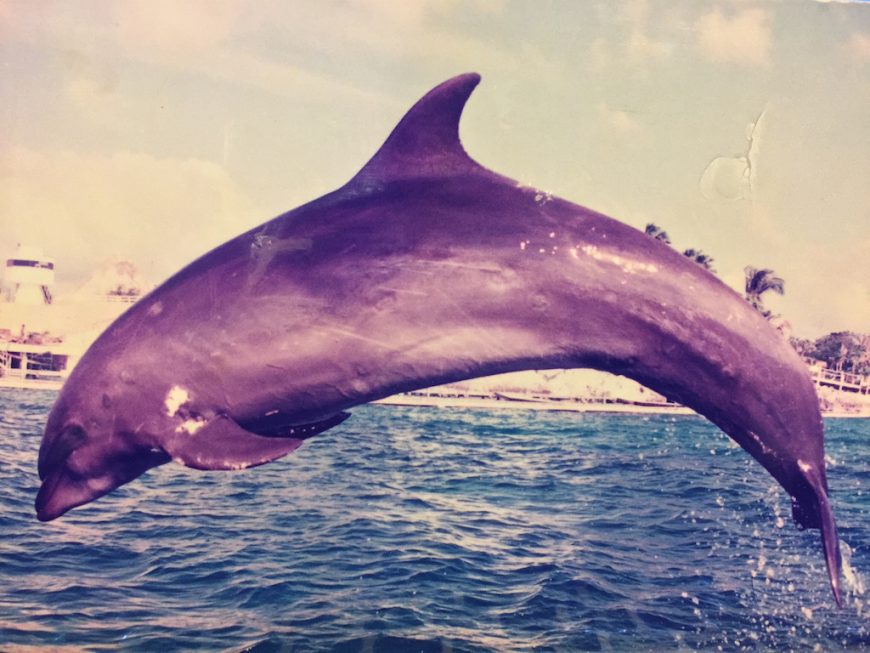 Perhaps it was no surprise that the male, bottlenose dolphin caught amongst a pod of nearly 500 during one morning in 1995 was named “Makaiko.” Translated to mean “inner strength,” the mammal surely must have endured great trauma, surrounded by dead and dying dolphins. Caught by hunters in Taiji, Japan (as documented by the Academy Award-winning movie “The Cove”) he was selected for a life of captivity, his attractive appearance likely contributing to his fate. After enduring five years of captivity, Makaiko was transported on a 56-hour journey, landing in Mexico City. He was put in a tank, even smaller than his previous enclosure. He was transported again, taken from Mexico City to Isla Mujeres (near Cancun) over a 16-hour trip upon which he was out of the water.

Here, the water was hot, the concrete was hot and the sun, blinding. Makaiko was forced to push paying patrons with his rostrum, drag them as they pulled on his pectoral fins and jump over people. His skin became irritated and infected with fungus. He suffered from open wounds. When Makaiko’s tank mates died, he was left alone in this unregulated enclosure, his suffering never ceasing to end. Several months later, Makaiko’s plight caught the attention of two dolphin trainers who genuinely cared about his welfare. They ensured that his tank was constantly re-filled with sea water, and when algae grew in the tank (as a result of only one of eight water filters being operational) the trainers cleaned and scrubbed his enclosure. His skin was massaged and began to heal. His “inner strength” grew.

But Makaiko was not out of danger. One employee apparently took pleasure in pouring chemicals in the water, almost poisoning the dolphin. As such, one of the trainers and her dog slept by the tank’s edge, to protect Makaiko from lethal substances entering his tank.

The dolphin needed to be moved sooner than later, and a rigorous campaign was launched in order that he gain his freedom. After much petitioning and communication with appropriate authorities, Makaiko was finally relocated to a sea pen at Dolphin Discovery. From that moment on, Makaiko was able to feel the natural rhythms of the sea as well as interact with other dolphins, despite a net which separated him from wild dolphin populations. Although his enclosure wasn’t deep, it was filled with life. Makaiko began to exercise and heal even further.

And yet, no man made facility could ever hope to replicate the natural conditions of a “wild” life. With some dolphins confined there for over 20 years, interactions were often rough; aggressive, likely from frustration, lack of space and lack of stimulus.

A storm was brewing – literally. In mid-October 2005, Hurricane Wilma hit Mexico. Makaiko and 15 other dolphins were moved to safety, to a tiny tank. When the storm passed, the dolphins were returned to their netted sea pens.

With water conditions less than optimal, the dolphins needed to rely on their echolocation to navigate. And in these rough and murky waters, Makaiko got tangled in the net, his flippers irrevocably holding him under the surface.

Ten years after he was taken from a life in the sea, Makaiko died. Much thanks and appreciation to Rocio Cue, Alejandra Del Castillo Alfaro and Kya Aramara for their generous contribution towards Makaiko’s story.