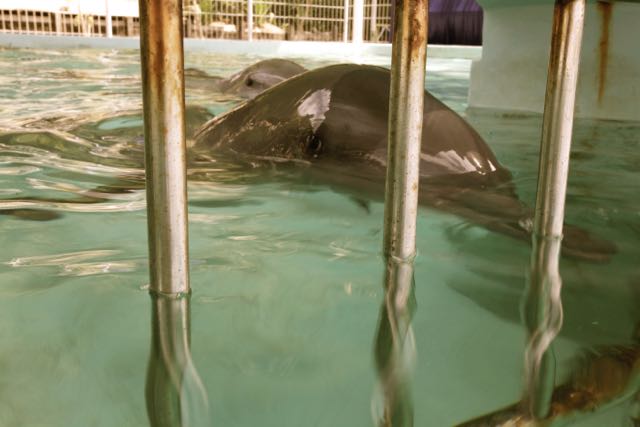 Since her birth in 1958 (estimated), Gabrielle swam free in a tightly-knit pod of other dolphins, likely comprised of family and friends. Her name would have been different then, being identified by a signature whistle and other unique characteristics. But sometime between 1963 and 1972, that would all change, when she was – without her consent – captured from her wild waters for a life of captivity.

Her first destination would be the Aquarium of Cape Cod, Massachusetts, where she was displayed for public viewing. It would have likely been here where she would have acquired the name, “Gabrielle,” a name which would have been meaningless to her. On July 25, 1974, Gabrielle gave birth to her first calf at this facility. Both her and the calf – a female – were transferred to Mystic Aquarium in Connecticut on October 15, 1974, approximately three months after the baby’s birth, when the Aquarium of Cape Cod closed for the season. After their arrival, a naming contest was held for Gabrielle’s calf, with the name “Turnip” assigned to her. Together, they lived at Mystic for about nine months, until they were transferred to the Aquarium of Niagara Falls, New York on July 25, 1975. Here, Turnip was renamed “Spray.” This would be the third facility Gabrielle would have been held captive at; the baby, the second.

Four years later on December 25, 1979, Gabrielle, then 22 years old, would give birth to her second calf, also a female. The baby, sired by Sunny, would be named “Christmas” but would die shortly after New Year’s Day, on January 6, 1980, at a mere 11 days old.

Tragedy would hit Gabrielle once more, with the death of Spray, her first calf, on May 8, 1983. The nine year-old dolphin would die of bronchopneumonia and pulmonary abscess, as revealed by the necropsy report. Shortly after, Gabrielle would move yet again to Marineland of the Pacific, California on August 26, 1983.

After living with a name not of her own choosing, and after birthing two calves under artificial environments and who would later die, Gabrielle was renamed “Echo.”

Gabrielle/Echo would give birth to at least one more calf on March 26, 1986, a male named “Thunder.” She and her remaining calf would live at Marineland until the park was closed and the animals sold to SeaWorld.

What once started out as a life filled with routinely making decisions and choices, ended in a concrete tank, after losing two calves and moving into not one, but four alien environments.