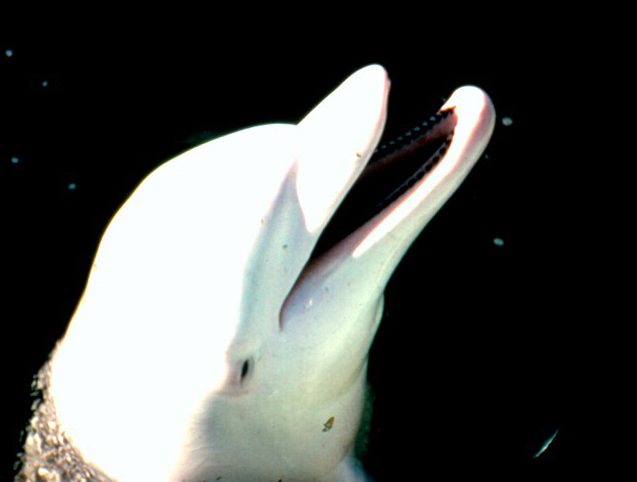 The white dolphin was one of a kind, the single most valuable water creature in the world.” ~ Ric O’Barry, “Behind the Dolphin Smile” In 1962, the Miami Seaquarium, led by Captain Gray, went on an expedition to Beaufort, South Carolina to capture what was considered to be the only known albino dolphin in the world. The mission was very low profile, as public outcry against the capture was evident. Even as far back as the early 1960’s, letters were written to local newspapers, and feelings were vented on radio talk shows, all against the capture of this beautiful, rare dolphin.

And yet, as elusive as she proved to be, Gray’s team which included O’Barry, caught the dolphin on August 4, 1962, on day 16 of the expedition.

Although South Carolina state legislature had passed a law against the harassment and/or capture of dolphins in the waters of Beaufort County, on this fated day in August, she was spotted swimming alongside other dolphins in unprotected waters, following one of the shrimp boats in the area. This small pod also included her baby, who never strayed far from his mother.

It was a difficult capture, with the albino making repeated attempts at maintaining her freedom. Her last moments living in wild waters were spent thrashing around in a net, alongside her baby. After a sum total of 58 days of actual pursuit over a period of 10 months, the eight foot long, 375 pound dolphin with pink eyes and black teeth finally became property of the Miami Seaquarium. Named Carolina Snowball, she was their star attraction, held in a $100,000 tank, complete with a viewing window. Yet ironically, she proved difficult to train, refusing to learn tricks.

Three years later, she developed an infection at the base of her tail and died shortly thereafter from a variety of serious medical complications. In commemoration, Carolina Snowball was mounted at the entrance of the main tank, however it’s our understanding that she has since been moved to a storage area. Her baby, named Sonny Boy, would live another 11 years in captivity, dying at the Seaquarium in 1973.

South Carolina remains the only state that prohibits the display of dolphins and porpoises.