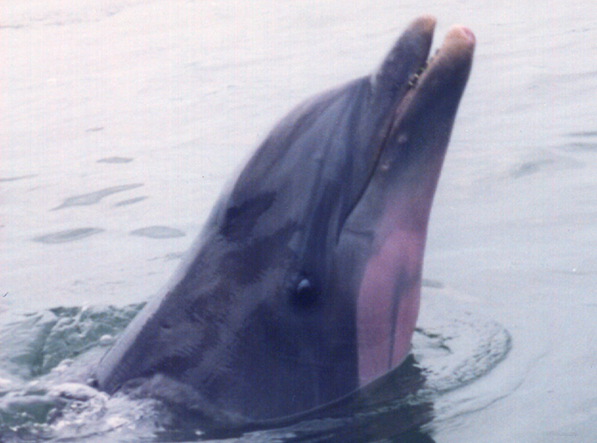 On September 12, 1986, a female dolphin, aged approximately 6 years old, arrived to the Dolphin Research Center in Marathon, Florida Keys. She had just been caught in the wild waters of the Gulf of Mexico, destined to become a part of Loro Parque’s animal collection, a zoo in the Canary Islands. DRC was to be her first stop, in order that she be acclimated and trained, prior to the long journey overseas.

Shortly after arriving to the Florida facility, the dolphin, named Captiva for the location of her capture (near Captiva Island, Florida) developed an infection in her right eye, causing her to lose sight. With one eye blind, plans were abandoned and she remained at DRC.

She was a shy dolphin, weighing approximately 300 pounds and seven feet in length. Eighteen months into her captivity, around April Fools’ Day, 1988, she collided into a wall or a dock in her pool, shattering the bones in her lower jaw. She required a surgical procedure that had never been done before. Two veterinarians and one dental surgeon created a brace to hold the bones in her jaw together as they healed, and seven stainless steel screws were drilled and screwed into place during the two-hour procedure. As dolphins are conscious breathers, Captiva could only be given tranquilizers, painkillers and a local anesthetic, and as such, suffered considerable pain. Four months later, the screws and brace were removed, leaving Captiva with an imperfect – but functional – bite, her jaw shifted slightly to the right.

Captiva, a part of DRC’s swim-with-the-dolphins program, provided guests with flipper shakes and dorsal pulls. She resided with other dolphins in the front pool of the facility.

In October of 1989, she stopped eating. She was given daily injections of antibiotics to fight a bacterial infection and was also supported with fluids. Yet despite DRC’s efforts, Captiva died on October 21, 1989 at approximately 9 years of age.

According to the necropsy report, she suffered from a stomach ulcer, possible pancreatitis and septicemia.